Leaf's losing face is the best gift Sakurai has ever bestowed upon us.

this was announced at evo shortly before grand finals for melee began. this announcement was out of nowhere imo and its happening so soon, 3 days!!!

Jumping on board for the 8/8 direct. Here's a brief overview of what we know has been changed:

-Directional Air Dodging is back
-Knockback is different
Fighters get launched faster and come to a more sudden stop, which affects the combo game

-All characters across the series are included, along with Daisy (Echo), Inkling, and Ridley
-Battlefield redesigned
-Some Melee stages return to the game

-Marth
Side B (Dancing Blade) is easier to use

-Snake
less power on Up Tilt

-Cloud
less range on aerials
limit only lasts for 15 seconds

That's all I can think of off the top of my head but there are many more notable changes to the game. It looks fun.
Last edited: Aug 7, 2018

KING K IS IN

WANTED THIS FOR 11 YEARS

I AM SO UNREASONABLY HAPPY RIGHT NOW OH MY GOD

900 music tracks what the fuuuuuuuuuck. the main theme remixes, the mega man x music, the gen 7 trainer battle remix. the music in the trailers soo good. i cannot WAIT to hear more.

all the new characters get their own character trailers so everyone go watch those!!!

no more to give

who hype for stage morph

holy fuck what a lot to take in from that direct, we got so much more than what i was expecting. we got two brand new characters and three clones, we got simon which we were all expecting from leaks and the smash website fail that happened yesterday, but did we expect richter as an echo of simon??? then we get echoes in dark samus and chrom, which we all speculated from alt skins missing, assist and robins final smash missing respectively, that theyd get in, and my god did they get in. dark samus is obviously samus with phazon, while chrom is more interesting as he echoes roy but has ikes recovery. then oh boy, at the end of the direct we get a trailer like usual, and it shows dk and diddy looking outside to see a silhouette of k rool, but then nope, its just dedede trolling us. my god dedede actually got me, but then he gets slapped by k rool anyways, and well there you fucking go, k rool is in smash. we get two of the biggest titans, ridley and k rool, confirmed, fuck yes. however i did hear sakurai say that theyre gonna show all the new fighters before launch, tho it might be a translation error, but it makes me sad cause no secret characters to unlock. they also showed off assist trophies and shovel knight happened to be one of them, which is actually really cool that he managed to get in the game for what its worth, they seemed to skipped on waluigi, tho thats likely because they showed him off at e3 already.

not only are there newcomers, but we learn that there are going to be about 103 stages in this game, that is nearly double the amount in the wii u version. including hd remakes of fountain of dreams, brinstar depths, and pokemon stadium, tho where tf is poke floats man. theres also an option to decide if the loser of a match picks the stage, so counterpicking is easier. now you can actually switch between stages mid match, as if every stage were in like castle siege, which is really cool. final smashes can also be a meter now, whether thisll be legal we dont know but hey, we fgc now. also u know how brawl mods had a mode where each stock is a character, well thats now added in there too, and theres a mode where after a match is done the characters you played as are no longer able to be selected, seems like a fun party mode. sakurai showed off the menu here and its so much better than the one in smash 4 thank god, but theres also a blurred out menu in the bottom left, which he said he cant show off just yet, story mode perhaps?

lets not forget about the music, with castlevania representation in smash, i was expecting a good chunk of its music in the game, and the franchise alone has 34 songs in the game, i dont even think franchises like fzero and fire emblem have that many songs in smash. then theres the total amount of songs in smash, which is almost up to 900 songs, insane man, sakurai himself said that the total length of all the tracks is around 28 hours total. thinking about the amount of remixes of franchises like fzero, megaman, and especially fire emblem get me rly excited, and we might get actual final fantasy remixes in smash this time.

there is also a smash bros edition switch that comes with a gamecube controller, brb pre ordering the fuck out of that shit.

I literally started crying, they're doing so much and putting so much effort into this. Like holy shit. I did not think things could get that much better after the last direct but here we are lol

This Direct was amazing and Sakurai's not even done blowing our minds. This is going to be the best Smash game ever.

What a fun direct, 5 characters plus all of th3 stage and music shenanigans i cant wait to get my hands on this game

Also 100% want to try out chrom, roy moveset without the hilt gimmick looks heat as fuck

He can now join Mario from the previous direct.

This direct reaffirmed my faith in Sakurai- I was actually disappointed to hear he was coming back. Not that I don't like him, I think he's a genius game developer, but dang like let the man rest. But he's really pulling out all the stops for this game. Every word that came out of his mouth was pure gold. That K. Rool trailer was fantastic and I seriously hope we get more animations like it. Super expressive characters, and the ending where DK and K. Rool charge at each other with his theme song in the background gives me chills.

The only thing that I don't get, a throwback to a lot of Sakurai's past decisions, is Alph. Given the hype regarding echoes and the whole 'everyone is in' schtick.... why did they decide to keep him as just a costume? It's especially weird since he's the ONLY character that has. I mean, the Koopalings do to, but thats understandable given they are famous as a group, not individually. I suppose you could argue it would be too difficult to seperate him and Olimar, but I don't see whats stopping them from taking on some arbitrary number differences or hitboxes or Pikmin throwing speed or what not. Give him Rock Pikmin or something. It's just so weird.

My theory is that they are saving Olimar's echo for Louie. I think Louie could work as a own character but it would fix the weird Alph issue. I don't know, thats just me.

Also, I'm so hyped that we've reached a point where Banjo & Kazooie is an actual possibility. If they put them I might as well stop playing video games altogether- cause that would be impossible to top. There's just no going forward from that.

I love all the new gamemodes first off. It's going to make the game much more fun to play now that we have new formats and I expect new tournament styles to be created in addition to the traditional singles and doubles.

Simon gets Melee Sheik's whip-thing which stops projectiles and seems to get some combos. K Rool gets a counter, a crawl, a dash attack that appears to have priority or super armor or something, a gun-thing (B), a projectile in the form of his crown which works sort of like a boomerang (Side B), and a damn helicopter pack thing to recover. I'm really excited to try all of them.

Ashley, Zeno, Knuckles, and Shovel Knight are confirmed as assist trophies too.

This is truely looking like an Ultimate Smash Bros. Just needs some Geno in it.

Makes one wonder, if Smash gets another game after all, what do they call it then? Hopefully by then, Sakurai gets away from the franchise before working himself literally to death. During the E3 direct, he looked like a skeleton. He looks better this time than the last direct at least.

was expecting isabelle in this game but i figured she'd be a villager echo. happy to be proven wrong, she looks like a fun and unique character. 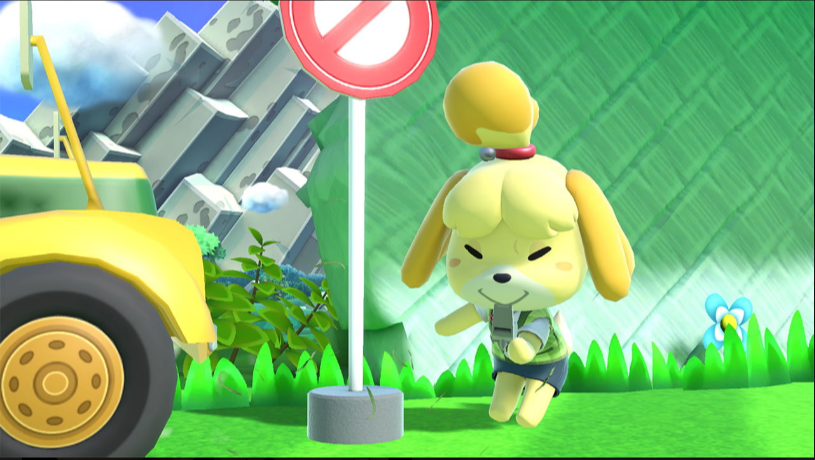 WHO THE FUCK IS ISABELLE??? jk but ngl i was very disappointed in this direct. In hindsight i shouldn't really expect much smash info from a general direct as opposed to a smash exclusive one. Since i havent played animal crossing idk anything about isabelle but uh, i guess she's a cool addition. Too bad no one was murdered this time around tho :(

Mafia Champion
Why is the town secretary in a fighting game, I can understand villager because he's the main character and Tom Nook could have at least fought other people with crippling and predatory mortgages but this is just dumb

isabelle was maybe the most popular/well-known nintendo character to not be represented in smash before today, she makes a lot of sense i think. she's basically the mascot of animal crossing and i'm sure she placed very highly on the ballot, which sakurai seems to be basing character choices on.
You must log in or register to reply here.
Share:
Reddit Pinterest Tumblr WhatsApp Email Link