Hello, and welcome to Tapu Fair-Fair. This team was build with one thing in mind, minimize poor match up chances. Fairy has not had a major shine untill S/M and I feel people are underating how major fairy still is in current metagame.

Teambuilding process:
Tapu Bulu + Tapunium Z Koko + Diancie + Klefki + Azumarill + Tapu Fini;
As the name implied it held true to the number of Tapu's it held, everything is a nobrain must for every Fairy mono except the fini. Fini served as the main answere to SD Scizor and could taunt any passive pokemon like Celesteela. It just relied far too heavily on Koko's Z to put Venusaur in range and I quickly realised going broad with Mimikyu was infact the right option.
The Team:

Tapu Bulu is a nail for so many mono teams it's honestly interesting. Tapu Bulu provides a fast wallbreaker only answered by the likes of flying types that are defensive stapled on the types they are placed on; Zapdos(Electric/Flying), Celesteela(Steel/Flying), Skarmory(Steel/Flying), Staraptor(Normal/Flying), Mandibuzz(Dark/Flying). Thanks to the item choce it provides the user with a 135 base Speed outspeeding revenge killer, this grants a check to Mega-Gallade, Mega-Lopunny, Mega-Manectric, you name it. This is the main attacker and everything else will be listed as support to it. Stone Edge hits Zapdos, Volcarona and Charizard-Y, everything else it could hit supper effectively it is objectively easier to toxic/sr chip and proceed to Edge after that has been done. Superpower hits worn down Ferrothorn, Bisharp and Stakataka. If you want Zen Headbutt, it's an option but all you hit is M-Venusaur/Kommo-o. While it might sound good to hit Venusaur, it doesn't do enough.

Tapu Koko is your way of getting past all the things I just mentioned and holds 1 major thing fairy is lacking soarly; Fire Damage. Ferrothorn and Scizor both cause major issues to all pokemon and having something that does the below listed calcs. Outside of the obvious it also answeres Celesteela, Toxapex, Crobat and much more. The ev spread might seem odd but there is logic behind it. With this investment you evade 2HKO from unboosted defensive M-Scizor and OHKO from +2 Mega-Scizor. But it also makes you U-turn on opposing Tapu Koko. Besides this... you don't miss out on anything either besides Crobat I guess?

I have had many people wonder what exactly this set is ment to do and to put it blunkly, it deals with Tapu Bulu and does everything you did need a Steel type for on a Fairy mono. This is exactly why it is running Flash Cannon. Because of the set up mon in this team being already self-supported there was no reason to go for screens, optimizing my ability to run Spikes, a Porygon2 answere and a priority hazard remover. This last being rather important for any match you did play over 1500 on ladder or againt anyone who is willing to make a prediction.

This is a Mega and it shows. Ground + Fairy coverage, acces to Rock to blast fire types like Charizard-Y and most importantly, it has Stealth Rocks. 110 Speed, 150 Offense and a type to account Fire/Poison attacks to some extend when not Mega evolved. I wish there was more to say but this pokemon showcases every form of versatility, offense and support you could requist out of an offensive rocker. Added bonus is that it rocks for free on Shuckle, Klefki, you name it.

Unlike your typical Belly dancing Azumarill, this one wears a trendy Choice Band. With this item it can finish off worn opponents as well as Excadrill/Blacephalon or any water weak attacker for that matter. Choice Band Liquidation also doubles as an out to Defensive Scizor set up, Celesteela's pressence and Cradily. Knock Off is blatenly self support to remove Helmet/Leftovers from Skarmory, Celesteela, Staraptor and Cradily. Play Rough hits Dragon/Fight types, nothing special here. Superpower doesn't actually help you vs any pokemon besides Ferrothorn so I don't see a reason to drop any of the other 2 main damaging stabs for such minor coverage.

Mimikyu is your out to Mega-Scizor/Venusaur as after a SD you can OHKO them. Past these you can also blank check literally every pokemon that isn't Normal typed. Swords Dance isn't always easy to set up but if you do without busting the ability you are curring the game's time down heavily thanks to the pressence the Tapu's force on anything didn't take this hit. Use it wisely, as you only get 1 shot with this mon and the item.

How it functions vs any existing mono team:

Picture intended on showcasing some experience for those who dislike to read; 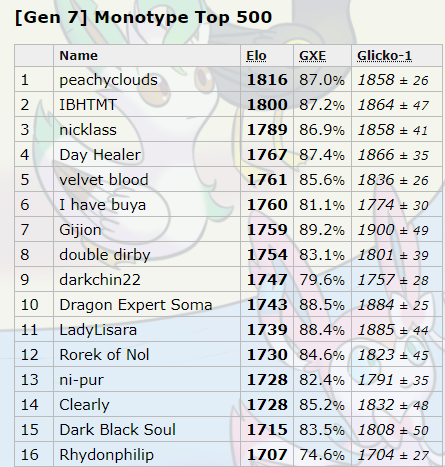 Special thanks to: StarBlim for suggesting me this tier and special thanks to Plas / Abejas for the no moral support that was given.​
Last edited: Mar 24, 2018
You must log in or register to reply here.
Share:
Reddit Pinterest Tumblr WhatsApp Email Link