I have been breeding and trading long to create this team. This is a team that I used in OU to great success, despite having only 2 OU tier pokemon. I'm also posting this team as my 100th post! This team consists of 1 pokemon from each generation, so here we go and feel free to rate! Each of these pokemons' 4th move puts a unique twist to them.

Tentacruel is my spinner as well as my fairy check. While his moves don't hit really hard, they are there just for status and can do passable damage when it is super-effective. Haze is his 4th move, which prevents him from being complete set up bait. I have tested other spinners, but they didn't seem to have satisfied me as much as tentacruel.
Synergy:
Electric- Celebi, Mamoswine
Psychic- Celebi, Aggron, Zoroark
Ground- Celebi...

The last pokemon in the johto pokedex (I think) enters my team for some crucial heal bell and water type check support. Spore immunity and natural cure is a godsend for celebi, it doesn't have to be selfish and use heal bell for itself. Future Sight allows some of my other pokemon to muscle through the enemies. While its not as strong as 3 psychics, it is able to put pressure on my opponent. I usually use it when I feel my opponent will switch out. The EVs are to make Celebi hit as hard as possible, while still outspeeding Modest 252 Spe Rotom-W (That's a thing, right?) The rest of the EVs are dumped into durability.
Synergy:
Flying- Aggron
Poison- Tentacruel, Aggron, Mamoswine
Fire- Tentacruel
Ice- Tentacruel, Aggron, Mamoswine (Ability)
Bug- Tentacruel, Aggron, Sylveon
Ghost- Zoroark...
Dark- Zoroark, Sylveon

I chose Aggron as my Mega because 1) He can survive the wrath of scizor, talonflame, MTar, and Pinser at +2. 2) He can retaliate/phaze the said pokemon. 3) He has stealth rock. I chose defense all the way because its just a cruel physical world out there in OU. Heavy Slam does its max damage to anyone 79 Kg or lighter, which includes Azumarill. However, I think Iron head would be most useful on Kyurem Black.
Fire blast is to land 2HKOes on Ferrothorn and scizor, who would laugh at any of offensive Mega aggron's attacks. Its a really useful surprise attack. The only thing that irritates me is that it gives celebi a major role as the only ground resister.
Synergy:
Ground- Celebi
Fire- Tentacruel
Fighting- Tentacruel, Celebi, Sylveon 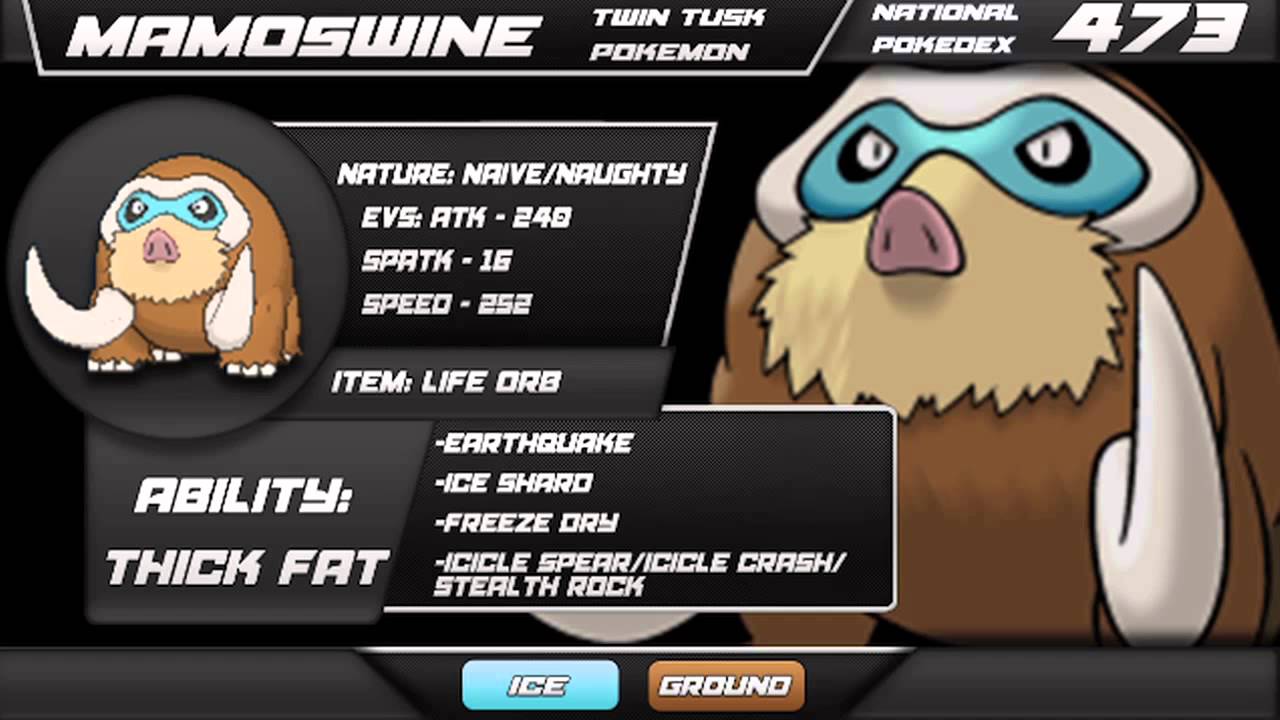 That picture almost summed it up for me... Anyway mamoswine is the star of the team, thats why I tried to breed a shiny but after 1000 eggs (lost count), I gave up. Mamoswine's STAB combination is widely feared, and with Freeze Dry, even gyarados, quagsire, and kingdra will be running. Freeze dry also has a good chance at 2HKOing Rotom-W after rocks. Earthquake has a 50% chance to OHKO Aegislash-Shield. Ice shard is for some much needed priority for the genies, a slight pain to the team. The goal of my team is to batter down the opposing team enough for mamoswine to sweep.
Synergy:
Water- Tentacruel, Celebi
Grass- Celebi, Aggron(Mega)
Fighting- Tentacruel, Celebi, Sylveon
Steel: Tentacruel, Aggron(Mega)

What Zoroark does best is to grab free kills. Unlike Hydriegon and Houndoom, zoroark does not scare away reuniclus or scizor. Sure his power is underwhelming somtimes, but its just enough for the rest of the team to finish the job. Focus Blast is a new move I'm trying out because after losing to a heatran I decided to do 2 things: Save mamoswine just for heatran, and have focus blast as back up should mamoswine die early. Snatch is his 4th move and it helps discourage healing and boosting. He is also the biggest reason why BP teams never beat this team. However he doesn't really provide much synergy unless we are talking about shadow sneaks.
Synergy:
Fighting- Tentacruel, Celebi, Sylveon (all 3 are his illusion partners)
Bug- Tentacruel, Aggron, Sylveon
Fairy: Tentacruel, Aggron In less then 30 eggs I hatch a shiny Eevee, but not a shiny swinub? I didn't even shoot for a shiny eevee! Oh well, it was the right IVs and everything, so I call it good luck. Sylveon is my cleric as well as my mixed wall, sporting the new fairy typing. Rocky helmet cause its a cruel physical world out there. Yawn is there so that mamoswine and zoroark will be able to pound sweepers who thought Sylveon was set up bait.

Final Notes:​
-This team has a win ration of a simplified 6:1, and thats discluding the noobs I fight in XY.
-I do not use this team in Battle Spot, as it requires full teamwork to win
-No setup sweepers, but high win ratio? WHY?! Personally I think the age of boosting is in a depression with all this priority and status running around.
-On the contrary, the scariest boosters to face are MTar and Char X. For Charizard X, all my pokemon have an unreliable way of dealing with it, so I have to combine those unreliable ways (at least one pokemon will die).
-I test in PO too.
-I hate to admit it but I attract battlers in XY by saying "beat me 4 diance". However... no one that fought for the diancie ever beat me...lol.
-GN9G-WWWW-WWW8-4S6P This is a battle video in XY to show how I play my team. My opponent fought me once before, so we are slightly acquainted to our teams.​

Sorry this bump didnt come in a long while. I should mention that I actually tried Pokemon showdown recently, and I was quite satisfied. This team peaked at 1565 in 30 battles. And last time I checked, it was a 24:3 win lose ratio... last time I checked...
Now I realize I do have problems with chansey and blissey, those stally blobs.
You must log in or register to reply here.
Share:
Reddit Pinterest Tumblr WhatsApp Email Link