WaterBomb said:
And he signed. I hate being right all the time.
Click to expand... 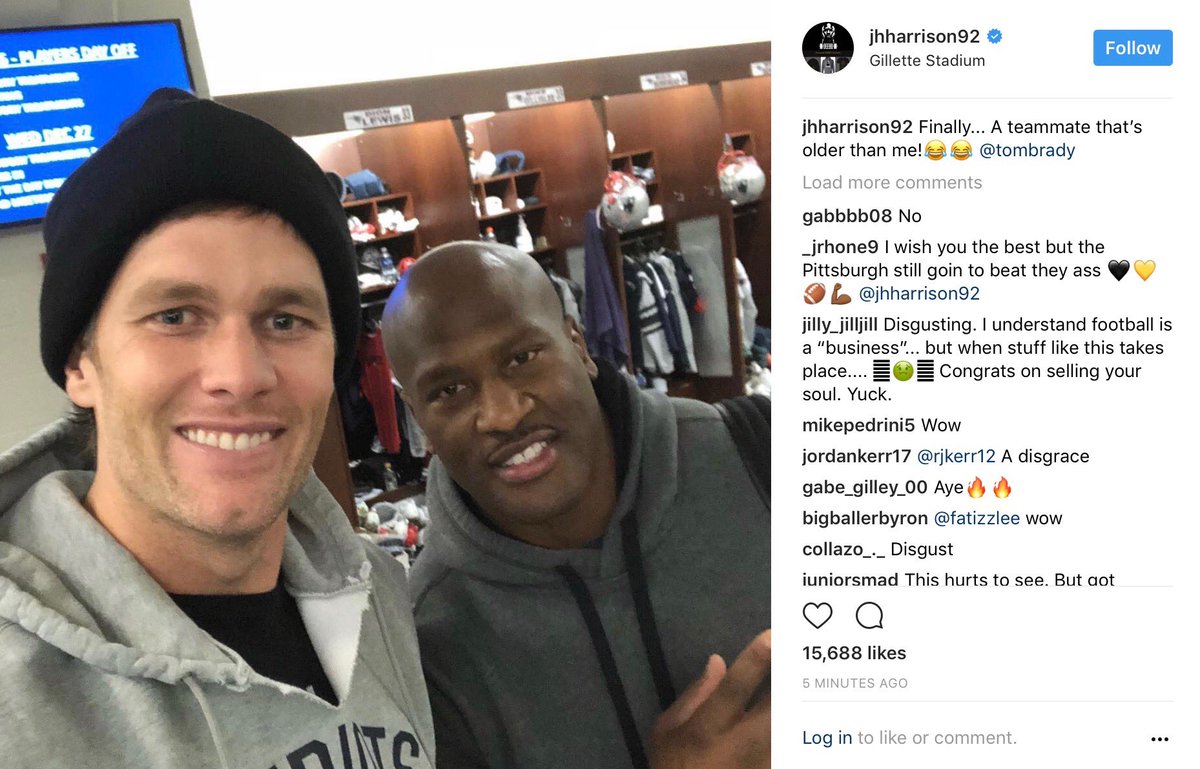 Doesn't this not give you a serious case of the warm and fuzzies?

I'm just pissed that people call it unloyal and now want to send him death threats. Sorry a long time all-pro and future HOFer wants another ring before he retires. It's a fucking buisness, and to these guys at the highest level, winning is everything.

Just being honest seeing him get a pick-6 or something against the steelers in the playoffs will be absolutely priceless.

It was the most obvious outcome. They're high on injuries and he's got the experience. They don't pay a lot, but he knows he can't ask for astronomical cash. Another SB contender. People are trying to spin it into some Kevin Durant shit, but it's football, totally different.

for those without the time, it's a compilation of Matt Ryan's unfortunate passes that account for 9 of his 13 turnovers this year, mostly bouncing off the hands of his receivers.

Moderator
He would, don't mind me I'm just salty af

What I wanna know is why Pittsburgh let him go in the first place? Anyone with half a brain could have foreseen this outcome. Cut him after the season is over instead. If Harrison has a monster game against the Steelers, management can kick themselves in the face. #inb4savingcapspaceargument

The Patriots pass rush stinks to high hell thats why the Pats went and got him, nothing else.

Why would they need intel on the steelers defensive schemes? Brady can probably teach Harrison more about it than he can teach him.
Last edited: Dec 27, 2017

Moderator
More sources are starting to come out saying that Harrison pushed his way out, due to unhappiness with his playing time this season. I get it, as who wants to do all that working out and conditioning to warm the bench? Guy is 39, has kids growing up and a family. If he's gonna spend that much time away from family, it needs to be worth it.

That being said, it's too bad Pittsburgh couldn't have found a way to make him happy with more playing time so he could finish the season and retire on good terms with them. Unless he'd become a total liability on the field (which I doubt), they could have used him a lot more than they were. I just hate the idea of him ending up on bad terms with the organization after so many great years. I don't want him to be another Steve Smith.

At least you're honest.

Moderator
I think there's been tension all season and this was just when it boiled over. He came back expecting to play, instead spent the season warming the bench. He felt his requests to play were being ignored which led him to want out, which the Steelers did not oblige immediately. There might have even been some resentment between him and the younger defensive players, including shazier who was the captain. That might explain his not visiting him in the hospital. Honestly now that more info is available it makes sense on both sides. I hear Harrison's beef, and I also get how Pittsburgh feels. Probably could have been handled a bit better on both sides, but hopefully this doesn't cause so much rift that he doesn't want to retire a Steeler later on after he's done with the pats. As I said earlier, I'd hate for him to become another Steve Smith, with bad blood lasting long after he's gone.

Phadunk said:
What a read that was lmao. Nice find.
Click to expand...

I come back and, surprise surprise, a Jags fan is talking shit and trying so hard to expose me LOL. You know, as well as I do, and as well as everyone else does, that who succeeds in an NFL season is heavily swayed by injuries AND that breakout teams are nearly impossible to predict. The NFL is basically a guessing game. I guess you’re just bitter of all those years of being in the basement and now you can finally gloat. Except you do realize that if Andrew Luck and Deshaun Watson were healthy this would be a different AFC South right? But whatever, enjoy what little success you have left until New England or Pittsburgh destroys you in the playoffs :)

Russell Bestbrook said:
I come back and, surprise surprise, a Jags fan is talking shit and trying so hard to expose me LOL. You know, as well as I do, and as well as everyone else does, that who succeeds in an NFL season is heavily swayed by injuries AND that breakout teams are nearly impossible to predict. The NFL is basically a guessing game. I guess you’re just bitter of all those years of being in the basement and now you can finally gloat. Except you do realize that if Andrew Luck and Deshaun Watson were healthy this would be a different AFC South right? But whatever, enjoy what little success you have left until New England or Pittsburgh destroys you in the playoffs :)
Click to expand...

bahahahahahahahaha so salty man we'll make fun of anybody for making a really shitty prediction so pull up your big boy shorts and own it ffs.

The notion that the Colts could compete with anybody just because of andrew luck is absurd. Grigson made them shit from top to bottom and denying that is just dumb. And again, the notion that Deshaun Watson could've brought the Texans back in the division race? I don't see them beating the Jags in Jacksonville in December w Bortles playing as well as he did.

Also, unpopular opinion but I think this is exactly what the Jags needed to get off the high horse and back to that dark horse mentality that allowed them to go bully the Steelers on the road early in the season. They were everybody's "sneaky super bowl pick" (not so sneaky since so many people were picking them mostly out of hatred for the pats and steelers) and once the 49ers game happened everybody jumped off the bandwagon and evacuated like hurricane irma all over again. I think it's exactly what they needed, especially remembering this isn't the first game where the team sort of lost their cool (@NY in which a couple boneheaded mistakes cost them the game).

Luck would not have affected the Colts much this season. He probably would have been put out another year or two again.

Looking forward to this funny ass 49ers win. Rams are sitting a bunch of guys now.

Hopefully Malcolm Mitchell will be the savior

They've joined the Lions in the winless club.

"It could be worse though, at least we're not Detroit!"

THE CURSE OF THE UNDEFEATED PRESEASON

Way to miss the playoffs in the most Ravens way possible you fucking shit cunts.

I am not watching this fucking team again until we draft a high ranking qb prospect. Fucking disgusting offense, disgusting coaching.

Ravens must be sick

That sucks for them

They lost to the Bungles