Day 1 of the draft is now officially in the books, so time for this seasons thread.

Today was a massive emotional roller-coaster as a Ravens fan, but I'm incredibly excited after our day 1 haul.

I feel bad for Bills fans. Overpaid for the worst QB taken in the 1st round. I'm just glad the Lions made a rational pick and took that center from Arkansas. The line gave up too many sacks last season and now that Stafford us paid, they had better make sure he stays healthy. Hoping for all defense picks tomorrow though

Killah said:
Jackson at 32 was a no brainer, first round draft picks get the fifth year option and for a rookie QB is a godsend.

I'm convinced that the Patriots not going all in on a QB means Brady and Bill go out together this year or the next. I was a bit surprised the Josh's fell as far as they did though, maybe that's a sign that most teams around the league didn't value them quite as highly as fans were anticipating.

Can't help but feel the Browns bungled their draft in the worst way imaginable, somehow missing out on the two best offensive and two best defensive players. Time will tell how that goes.
Click to expand...

Killah ill respond to your post here instead of the old thread.

This could be my Oklahoma bias showing through, but I think Baker is incredibly talented and has underrated physical tools. I have no issue with that pick. Ward (despite being the top cb on the board) over Chubb surprised me though, Chubb was probably the second best player in the draft if disregarding position. Browns needed a cb way more than ends though, so if they had both players very closely grades, I can also see the logic in the pick.

Also how about the Steelers reaching on lesser Edmunds, he of the amazing measurables and dog shit game tape, a full two rounds earlier than he should have gone?

Baker is fine, and personally I'm a little higher on him than the consensus I think when the main knocks against him are "haha he's Drew Brees-short" and "oh man remember that time he planted the flag at OSU's midfield he's a BAD SEED!!" I don't buy into character issues unless they're Manziel-sized problems, there's a far cry from "dude who sometimes goes too far to style on his opponents" and "dude who is physically incapable of not drinking himself into a coma between games at every social gathering in a 100-mile radius." There's been shorter and noodlier-armed QBs that have succeeded in the NFL, who cares.

Maybe more important is the support from the actual team they join, which is why the Browns are perennial losers regardless and the Patriots make winners out of Tom Brady + 50 nobodies.

How does everyone feel about their respective teams drafts?

Stallion said:
How does everyone feel about their respective teams drafts?
Click to expand...

I felt good about the first two rounds... the rest of them I just have to trust DQ.

A bit disappointed. I know they weren't very high on the linebackers this year which is why the Steelers, for once, didn't take one. I think Edmunds is a good fit and went a little high but I don't think it was a huge overreach. I just don't see the draft class actually helping the team much this year unless Washington blows up like JuJu did (which, can you imagine?) The Steelers have a lot of bodies in the defensive backfield now which leads me to believe the safeties are gonna sit for a while. Remember, Polamalu was just a special teamer his first year, as a first round pick. Rudolph apparently had a first round grade so that's crazy good value and might work out to be Ben's replacement. Just don't foresee the Steelers being successful in the playoffs this year, again.

Stallion said:
How does everyone feel about their respective teams drafts?
Click to expand...

I really like Sony Michel, but i'm not sure about spending a 1st rder on a RB when the Pats have a bottom 5 DLine and really bad Linebackers aside from Hightower.

I'm also fine with the Pats not drafting a QB this year, its clear they did their due diligence on the QB class this year and didn't like any of them. Brady should play at a top 3 level for 2 more years so they've still got time.

They also accumulated a shitload of extra picks this year so they have the ammo to get their guy next year if hes there.

Pretzels said:
I really like Sony Michel, but i'm not sure about spending a 1st rder on a RB when the Pats have a bottom 5 DLine and really bad Linebackers aside from Hightower.

I'm also fine with the Pats not drafting a QB this year, its clear they did their due diligence on the QB class this year and didn't like any of them. Brady should play at a top 3 level for 2 more years so they've still got time.

They also accumulated a shitload of extra picks this year so they have the ammo to get their guy next year if hes there.
Click to expand...

You did draft that LSU QB in round 7 for what it's worth, but I think he's trash and not a potential Brady replacement. Backup at best.

Since it's now official and not speculation: You will be missed, Jason Witten. o7

The 69th overall pick in 2003 retires with 69 career receiving touchdowns (including one playoff TD) and a career long of 69 yards.

Sorry the boys never got you a ring, man. 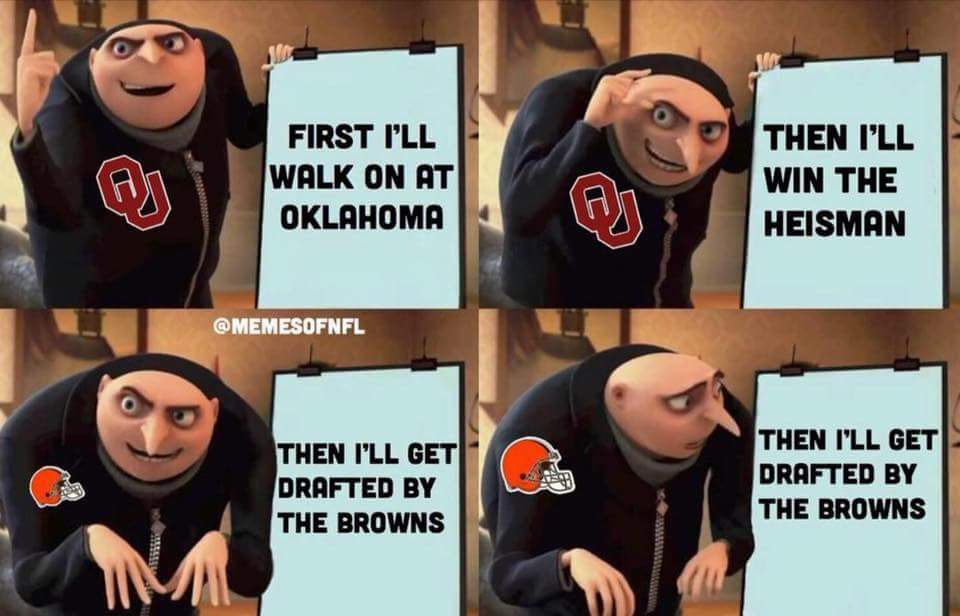 i think Chark is going to ball out.

hey guys i do exist! its been a while...

Killah made an amazing point imo, the browns had the #1 and #4 overall pick and missed on the two best players on both sides of the ball, which definitely has me anxious. If i'm being honest, with Tyrod under center, I would've drafted two players for my offense, and those would be saquon barkley, who's literally a game wrecker a la ladanian tomlinson and i believe is significantly better than all of the backs that have come out in the past 3 years, and quenton nelson, who's another can't miss prospect and the best OG to come out of the draft in years. I really believe the Browns took a huge gamble in passing on surefire picks to get their qb of the future that's just gonna get thrown in as soon as Taylor doesn't have instant success. Granted, I really like Denzel Ward and he fits a serious need for the browns, but I digress.

As for the Jags, I really like the Will Richardson pick. A lot of his concerns are off the field, but he really seems to have changed himself for the better and I firmly believe the staff believe so as well. I genuinely think he's going to be a long time starter for this franchise. I also LOVE the leon jacobs pick, he's a raw prospect but he has a very similar skillset to Telvin Smith coming out a few years ago and could end up being a similar player with good coaching and mentoring. Mixed feelings on Harrison, some scouts rave about him but I have concerns for any safety in the modern NFL that can't play man coverage.

Jesus, Hunter Henry OFS with a torn ACL in OTAs.

Pretzels said:
Dropping in to say that not enough people realize that derek carr sucks
Click to expand...

Does everyone realizing that he was overrated after 1.5 seasons of good play mean he sucks?

I don't honestly know. Based off of last year I agree with this statement. Its hard to say throughout all of the years. I guess I would agree because Bortles has shown up in a playoff game lol

Peyton Manning's use of HGH was confirmed today

Anyone else see the Top 100 Players rankings that NFL Network puts out?

Del Rio said:
Anyone else see the Top 100 Players rankings that NFL Network puts out?

I believe it's voted by the players, not the commentators/ "experts." It honestly is about how they feel. Plus Case had better weapons than Carr does

But from his ashes a new legend will arise

Pretzels said:
Peyton Manning's use of HGH was confirmed today
Click to expand...

Too bad he used it all on his forehead

WaterBomb said:
Too bad he used it all on his forehead
Click to expand...