"Brady finished the night 21-of-35 with 262 yards and one interception and helped set the Patriots up for their only touchdown with a 29-yard completion to tight end Robe Gronkowski.

Real talk tho, no Killah you're wrong as hell and tbh everyone is wrong as hell, that was great Defense on both sides. It's not like the Rams are a bad offensive team lol, they were the second highest scoring team in the league. This same Patriots Defense looked much the same last week where they held the Chiefs to 7 points over 3 quarters. The only difference is that didn't happen was the offensive pop-off that everyone could feel was just barely being held off.

How you could watch this game and not be excited about the play? The Patriots hurried Goff on damn near every dropback with Defenders near draped on every receiver, all while vertically blowing up the Rams Zone Blocking scheme near every play when people were just two weeks ago talking about how the Rams Offensive Line was the best in the league. I mean shit how could you not be just ENAMORED with how wide open Brandin Cooks was in the endzone only to see Jason McCourty close the distance in the blink of an eye to break up the play???? Or how many times Marcus Peters just humiliated Chris Hogan on deep one on ones like 3 separate times. The Rams DLine had a really tough time against the Patriots gameplan and Offensive Line scheme, but you could SEE how much pressure they were threatening because of both of those things. Brady was forcing the ball out of his hands way too early making him entirely inaccurate for the FEAR of Aaron Donald and Ndamakung Suh. The Rams defense is built around a single show stopper play that can kill a drive, and they brought it near every drive. 3 of 13 on third down conversion for the Rams, and 3 of 12 for the Patriots. The Defenses played AMAZINGLY WELL and that Super Bowl was RAD AF.

Breakfast, Lunch, and Dinner’s for Beginners

The pats defense put up a good performance, but you can’t say Goff even had a decent game when he was too busy throwing it at Cj Anderson’s ass and not seeing open players, this sb was shit even if it was a defensive matchup. One touchdown for two top 5 offenses in the league what a joke, I feel bad for anyone who paid money to watch that waste in person, nonetheless those who watched it on tv. The rams had like what 3 first downs in the first half, even if it was a defensive game this shouldn’t happen, not to mention the pats d is one of the worst in the league, even tho they showed up last night. You also can’t say the game was exciting when every other drive was a three and out. The most fun part of watching the game was at the end when Brady seemed so disinterested in talking to anyone and looked like he was about to kiss a dude and that’s just because it was the first bit of shock I had all night. If it wasn’t for Julian Edelman and the only good throw of the game I would’ve been sleeping. The saints would’ve creamed the pats and they deserved to be there. In conclusion without a doubt this was one of the worst sb’s ever. Also the halftime show was a big let down
(Who tf is big boy??)

Killah said:
this is why no one likes boston fans
Click to expand...

That was an absolute shitshow. The NFL got what it deserved.

Congrats to the Patriots for their first Lombardi win though.

Also, just a friendly reminder that Wentz is better than Goff and Prescott.

Not a Pats fan, but I didn't mind this game and idk what the uproar is for. Not sure why everyone was expecting a barn burner without any possibility of a low scoring game. If nothing else, credit both defenses, especially Wade Phillips and the Rams defense for playing the game of their lives, getting key 3rd down stops and holding the Pats to under 14.

I agree McVay could've possibly called a better game, Goff was less than spectacular, and the offense stalled. But even with those factors the Rams still drew up and executed several perfect plays they nearly scored on, and they only failed because of incredible plays made by the Pats secondary. If Jason McCourty doesn't pull off his man and pick up the deep middle zone, Cooks scores on that busted coverage in the 3Q. And Gilmore and Harmon breaking up the deep shot to Cooks late in the 4Q, again, how is that on Goff or the Rams at all? Cooks nearly brought the ball in too, they just made a great play. If they score on either of those it's a totally different ballgame. All the success the Pats had on offense doesn't mean anything when they only scored one TD, they still left the door open for LA with their own miscues.

The losing team in the SB doesn't need to score four times or have 500 passing yards a la Brady last year for it to not be a boring game. Feel free to disagree, but last night was far from a snooze and if that's how you feel, your expectations are heavily swayed toward what makes a good spectator sport, not a good football game.

A game can be defensive (a la Denver VS Carolina) and still be entertaining. This was an absolute fucking snooze fest and we were robbed of Spongebob. That was a waste of my evening.

ppl rly out here arguing about Edelman's PED use and how it should take away from his MVP or some shit lmao.

Meanwhile not a single person anywhere said anything when Von Miller won super bowl MVP despite being found guilty of bribing his drug tester lmao.

tennisace youre the one who did it last time as I recall.

Also speaking of defensive players getting MVP: Calais Campbell made a great point how Stephon Gilmore had a Forced Fumble, an Interception, 3 passes broken up and 5 tackles on the day while blanketing Brandon Cooks out of the game p much solo. When the defense hold the second highest scoring offense in the league to 3 then you should’ve given it to the most outstanding performance on D. I don’t even think Edelman was the most deserving on Offense either I thought Sony Michel was way more critical on the meaningful drives, whereas Edelman gained a lot of yards that lead to punts mostly.

This was the most amount of action that happened yesterday.

He's somehow now become the greatest player ever despite not being anywhere close to the league's best player since 2014, and has been completely irrelevant on the National stage for 2 years.

Matt Ryan has been better since 2016 but nobody's talking nonsense about him
Last edited: Feb 11, 2019

The Browns just signed Kareem Hunt. I have no doubt in my mind now that this team will make the playoffs.

Not like anybody's really gonna care by the time the season starts. People want football and good players at the end.

It was a smart move by them. He's young and not expensive. Might as well have two studs. He's not even guaranteed to play because of the suspension. It's only a single year contract, which means he's under four seasons and will be a restricted free agent, giving them more leverage. And if things go well, they can trade him.

It can end up being good PR for them if it works.

Aerodactyl Legend said:
Not like anybody's really gonna care by the time the season starts. People want football and good players at the end.

It was a smart move by them. He's young and not expensive. Might as well have two studs. He's not even guaranteed to play because of the suspension. It's only a single year contract, which means he's under four seasons and will be a restricted free agent, giving them more leverage. And if things go well, they can trade him.

It can end up being good PR for them if it works.
Click to expand...

Just about the only thing we know is that they signed a really talented player for real cheap.

I'm a little salty that had either of my teams signed him, there would be serious backlash. 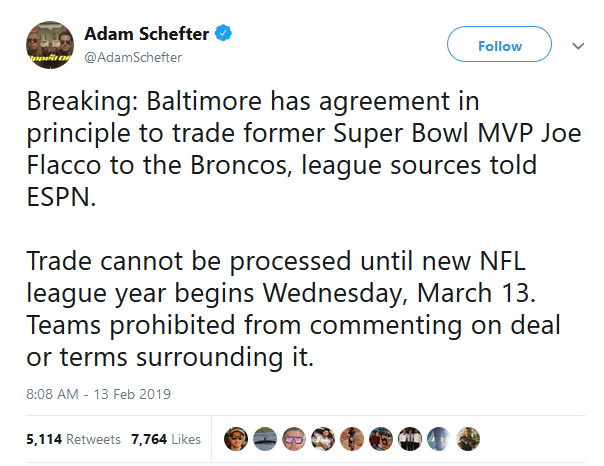 John Elway is a great GM.

Hes the Joe Flacco of GMs

Del Rio said:
Thank god I can finally laugh at Flacco jokes now that he's no longer our problem
Click to expand...

It feels so good

If only the Pats got OBJ last season, then maybe they would have won the superbowl by 20 points instead of 10.