Hello everyone, I am TheGr8RedDragon and this is actually the first time that I'm posting on this forum.
With this post I want to showcase a team that I've been using for some time and I wanted to share it with you guys, to have some feedbacks on it.
So, the main premise about the team is that Crawdaunt is by far my favourite 'mon to use, and I've tried every generation new ways to use it in OU.
I feel that the best way is to use it as a wallbreaker in Volt/Turn teams, but without further ado here's the team! 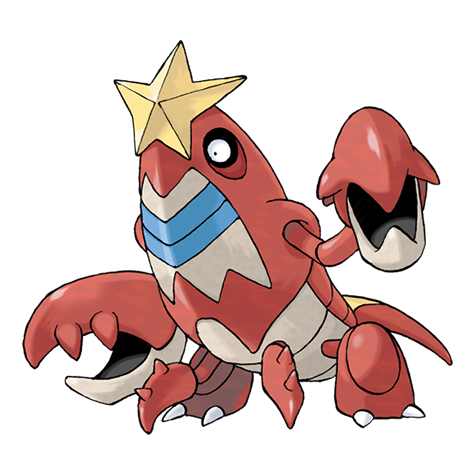 Crawdaunt @ Choice Band
Ability: Adaptability
EVs: 4 HP / 252 Atk / 252 Spe
Adamant Nature
- Knock Off
- Crabhammer
- Aqua Jet
- Close Combat/Crunch
The first member of the team obviously is Crawdaunt, I chose the choice band set because I feel that it is the best way to use it (outside of trick room), as it does not have the bulk or the speed to set up with a SD set.
It is a pretty standard set, consisting of STABS, Aqua Jet for priority and the newest addition of this Gen, Close Combat (which is pretty nice to hit Ferro and Hydreigon on the switch, though both take massive damage from Knock Off or Crabhammer anyway).
I recently started using crunch instead of CC because of Physically Defensive Pex, since after you Knock Off its item the first time, the move is much weaker and it can be annoying.
The cool thing about this 'mon is that Crabhammer is basically a nuke on anything that does not resist it or is immune to it (Gastrodon or Seismitoad), while Knock Off obliterates everything else, while Aqua Jet lets you revenge kill faster 'mons such as Cinderace, Excadrill and even a weakened Dragapult. 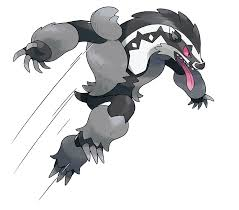 Obstagoon @ Flame Orb
Ability: Guts
EVs: 252 Atk / 4 SpD / 252 Spe
Adamant Nature
- Facade
- Knock Off
- Close Combat
- Obstruct
The second member of the team is Obstagoon.
I find that the two of them work really well together, breaking down each others checks.
I chose the FO set because in my opinion is the best set it can use, it gives it a really good breaking power and a status immunity.
Furthermore, Obstagoon is pretty bulky for a wallbreaker and provides me with an unusual ghost immunity. 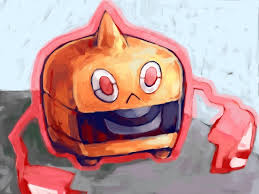 Now I had to start to build the Volt/Turn Core for the two wallbreakers above.
Currently Rotom-H is one of the best 'mons in the meta, it provides the team with a ground immunity thanks to levitate, a LO Clefable check (as it naturally resists all of its moves), a Corviknight Counter, and most importantly it acts as a great pivot.
Moreover sometimes thanks to having NP, it has won me some late games. 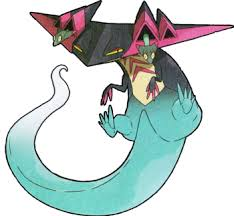 Dragapult @ Choice Scarf
Ability: Infiltrator
EVs: 252 SpA / 4 SpD / 252 Spe
Modest Nature
- Draco Meteor
- Shadow Ball
- Fire Blast
- U-turn
Dragapult is one of the best 'mons in the game, acts as a great pivot, late game cleaner and revenge killer.
I use the scarf set because my team is pretty slow and I needed something really fast to compensate for it.
One of the great things about Scarfed Dragapult, is that it is so fast that lets me revenge kill 'mons that have already set up, such as DD Kommo-O (even behind a SUB thanks to infiltrator), it also provides me with a fighting immunity, as my two main breakers are weak to it. 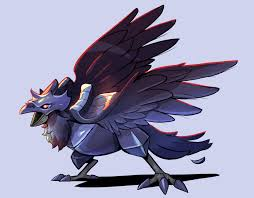 Corviknight @ Leftovers
Ability: Pressure
EVs: 252 HP / 4 Def / 252 SpD
Careful Nature
- Brave Bird
- Roost
- Defog
- U-turn
Corvikight forms one half of the defensive backbone of the team, as my main attackers (except for Obstagoon) are not exceptionally bulky.
It is a great Excadrill and Dragapult check, hazard remover and pivot with U-Turn. 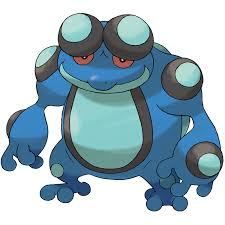 Seismitoad @ Leftovers
Ability: Water Absorb
Shiny: No
EVs: 252 HP / 252 Def / 4 SpD
Bold Nature
IVs: 0 Atk
- Stealth Rock
- Scald
- Toxic
- Earth Power
Seismitoad is the last member of my team, acts as the physically defensive 'mon, provides me with SR support and an invaluable Electric and water immunity, so that I'm not destroyed by Banded Dracovish.
This is pretty much the standard set, I'm running Earth Power instead of Earthquake, so that I'm not bothered by WoW from Rotom formes.

So that is the team, I've been pretty successful with it and I hope you can help me improve it.
Last edited: Feb 12, 2020

I must say that i can't find any major flaws with this team. It deals with the common threats to BO, pokemon such as dracovish, dracozolt, dragapult, weather teams, togekiss, scarf users and so on. It has a strong breaking core of dual dark types.
Crawdaunt has always been a favorite of mine, and it deals good amounts of damage to many defensive pokemon. This paired with a threat that you dont see too often, obstagoon, having decent bulk, the guts ability and a very usable speed and attack stat, along with good offensive movepool.
Scarf dragapult is also something i like to use myself, as it revengekills many pokemon and with the already strong offensive breaking core, it is a good pokemon for cleaning up late game.
Rotom-w, seismitoad and corviknight form up a defensive backbone to this team. Seismitoad being a staple on many offense teams in this meta for a reason, gives your team rocks, immunity to both water and electric (which deals with dracozolt and dracovish) as well as being one of the few pokemon that can take a +2 throat chop and iron head from life orb bisharp. The corviknight set is very purposefull for this team, as max sp.def lets it take on various threats that seismitoad and the slower offensive pokemon otherwise gets threatened by such as hydreigon, dragapult, excadrill, conkeldurr to some extent and specially based aegislash. U-turn lets it pivot out against pokemon that it cannot beat 1v1 as well. Lastly, rotom-heat catchces the remaining annoyances for the team; togekiss and ferrothorn.
All in all a very solid team.

I have played quite a few games with this teams for testing, and am pleased to say i was able to plan out and win all of them. Around 10 games i believe. I did take some notes on how to use the team though, as i faced mostly every playstyle apart from stall.
First off;

conkeldurr is threatening to the team, and should you face one it needs to be kept in mind that it cannot be allowed to come in for free too often.

Dragapult, but this does loose you your corviknight which can become a problem. Playing somewhat offensively, pivoting and voltturning against it and getting chip damage in general is the best way to deal with it, so it gets in range of Draco Meteor or Brave Bird.

Bisharp is a big threat in the metagame, and you will have to keep either

Obstagoon healthy to deal with it. It shouldnt be a problem as long as you keep this in mind and dont let it set up more than +2 with sd.
Various other setup priority users are a bit threatening, such as

Aegislash. Physical Aegislash is checked by

Seismitoad, but Mimikyu can be problematic, so play around it safely and dont let it get in for free.

because of GameFreak giving every one of these a viable fire type move that corviknight does not appreciate.

Corviknight also doesnt have any move to beat them 1v1 either, so you will need to play the prediction game a few times to get in either

Obstagoon that can beat them down.

Seismitoad cores are a bit annoying. I chose to deal with this by swapping Toxic on

Seismitoad for Grass Knot. This lets you weaken opposing seismitoads to the point where the Corvi/Seismi core is no longer as annoying, as it cant switch in well to rotom-heat anymore, and ultimately this lets you break down the opposin defensive core much faster and efficiently. Playing games tht geet dragged out are risky, especially if your opponent is using a more balanced or defensive team.

Hey!
Dole Duck!
First of all I would like to thank you for your kind relpy!
I am really happy that you appreciated the team and had fun with it!
In response of what you pointed out in your reply, I would like to say that I agree with you 100%.
While I was testing the team I myself found Conkeldurr to be rather annoying and difficult to switch into, without some proper prediction (which is always not very good LOL).
Bisharp is a big threat as well, as like you pointed out, I have to either keep Seismitoad, Crawdaunt or Obstagoon alive to properly check it, as long as it doesn't get too many SD boost under its belt.
I will try using Grass Knot on Toad ;)!
Thank you again for the reply!!!!

Well, I've been out of Showdown for a long time (before G-Darmanitan ban). After seeing all the metagame changes and reading a lot of posts, I decided to come back to play, even with Duggy still arounding this lands. I tried your team, and I really love it. Congrats! :)

Mismo_YT said:
Well, I've been out of Showdown for a long time (before G-Darmanitan ban). After seeing all the metagame changes and reading a lot of posts, I decided to come back to play, even with Duggy still arounding this lands. I tried your team, and I really love it. Congrats! :)
Click to expand...

After playing more with your team, I changed the evs of Corviknight and try Scarf Gengar over Dragapult, and I think that Gengar is doing really well too. I'm not a top player, so maybe it's not the best option, but if you like to try, the sets are:

you could also try switcheroo over obstruct for obstagoon

Is this team for single or double format??
Srry im new here

This is single format for the OU ladder om pokemonshowdown. The regular OU, not the National Dex :)

Ahh i see thx for your information, i already got all the mons, i will try it on ranked:D, will give you the result later

I really like this team, one thing I changed was switch obstagoon for LO Bisharp. I’ve been able to deal with fairy types a lot easier with iron head on Bisharp.
You must log in or register to reply here.
Share:
Reddit Pinterest Tumblr WhatsApp Email Link