Many of us who play NU feel as though there is some untapped power within the NU environment. There is substantial evidence for this idea in the form of one commonality for most tiers, NU included: there always seems to be one or more new-fangled, hyped up sets that weren't originally main-stay or seen as "viable" by the community, but somehow has taken the metagame by storm. This can be seen in DPP OU (with Special Lucario transitioning to SD Lucario, Heatran eventually running items other than Choice Scarf, and the influx of ChestoRest Kingdra) in ADV (with the vaunted TyraniBoah now becoming almost an urban myth in comparison to Special and DD Tyranitar, and the increasing popularity of SupeRachi) and in BW OU (with the advent of SubSalac Terrakion, SubDisable Gengar, and ChestoRest Volcarona). Yes, some of these sets may have been found early on with respect to the creation of the tier or fairly recently, the point is, though, that there seems to be an endless supply of effective and potent sets out there yet to be discovered, especially factoring in metagame swings and the possible tier shifts. The purpose of this project will be to systematically subject each and every NU Pokemon to a collective body of research in an attempt to uncover these "hidden gems", so to speak, and hopefully spark some creativity throughout the NU community.

Each week, I will choose a different NU Pokemon, sometimes chosen by random, sometimes chosen by curiousity, of which participants will try to personally create a new set for that is not already on-site or in the process of being put on-site. Participants will be given 2 days to create their set, then there will be 2 days of discussion where they can "sell" their set, and give comments on how to improve others' sets. After that, voting will last for two days and the next round will start. Keep in mind that users can edit their entire idea before voting starts, however, during the voting period only their most recent set will count and all votes towards said user apply to their most recent set. Also, if you've created a set for that round, you are allowed to vote for another user (other than yourself) if you wish to. Once the votes are tallied and a winner is crowned, the set will be archived in the second post and the process will start all over again for the next Pokemon specimen.

What are we looking for?

Specifically, I want to stress the importance of the balance between creativity and viability when picking a set to post for the Pokemon in question. There's a very fine line between a "creative" set and a "gimmick", and this project is not meant to produce gimmicks, rather emphasize the ability to think outside the box when using a specific Pokemon in order to maximize it's potential. Having said that, I would also like to deviate from simple one move / item changes. For example, using Ground Gem over Leftovers on Golem does nothing to show any untapped potential Golem has because we already have a basic understanding of what Golem does. The same goes for using Thunder Wave over Signal Beam on CM Musharna, it doesn't yield productive discussion or results for the project. I am looking for sets that test what we think we know about checks or counters, so-called standards, and what it means to be viable. Maybe a particular option for a Pokemon looks inferior at first glance for that particular Pokemon, but dig deeper and try and find what it might mean in the big picture, for the entire team.

Some things to consider:

This is a great lure set for Mega Audino.

Although M-Audino (Maw-dee-no) has only base 80 Special Attack, it has a propensity to lure in steel types like Mega Steelix and Ferroseed.

In addition, Psychic allows Audino to hit the Poison types that try to counter it (Vileplume, Garbodor).

This is basically the optimal coverage given the current state of NU, but you can run Surf > Psychic to hit M-Camel and fire types in general. 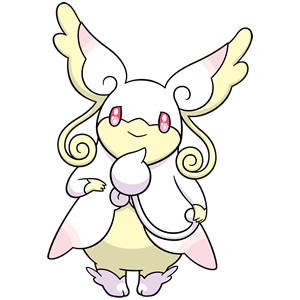 Trick Room Mega-Dino is pretty cool in the sense that on TR teams it not only is a pretty powerful sweeper, because despite its relatively low SAtk its cool STAB, coverage move, and amazing bulk means it can consistently land hits against the opponent as well as getting its TR up consistently. Furthermore, it packs a powerful Healing Wish to further support TR teammates who are easily worn down, as well as getting them in while the field is up. Furthermore, this version of Mega-Dino is a great counter to many fast paced HO teams, which get flipped on their sides when TR goes up. Incredibly unique to pair with stuff like Yama or Exeggutor.

Lol I keep posting this set.

Offensive WishTect Audino brings a lot to the table, from a soft check to like half the tier (especially checking and countering the very common Dark- and Fighting-types) to a Wish passer for bulky teams (that can even abuse Regenerator prior to mega evolving) to a lure for the two arguably most dominant pokemon in the meta in M-Steelix and M-Camerupt (depending on its coverage of choice) in addition to other Steel- and Fire-types (and Vilepume too). The removal or weakening of these threats can pave for pokemon such as Ninetales, Sneasel, Musharna, Sub CM Uxie, Scarf Typh, and others to sweep. If you run Surf, Modest 164 SpA let it 2HKO Ninetales. The defensive investment lets it take a lot of powerful hits, with Khan's Silk Scarf Double Edge, Pyroar's Flame Plate Fire Blast, Archeops's Acrobatics, and Scarf Typh's Eruption (most of the time) only 3HKOing, and it's strong enough to threaten offensive pokes. More offensive spreads can be run, and it'll still be able to take all these hits incredibly well. It is set-up fodder CM sweepers such as Uxie and Xatu and SD sweepers like Gatr, but that's true of pretty much all its other sets. Overall, this is just a great glue-mon for balance and bulky offense teams that pairs excellently with other bulky stuff like Yama.
Last edited: Jan 17, 2015

Mexican Pivot Audino. It has good bulk even without full investment and enough speed to outpace max speed adamant M-Lix. Fire Blast or Surf is used depending on which Mega you want to hit harder. Thunder Wave lets it neuter fast, frail threats like Archeops or Jynx. Healing Wish is a great move in general that allows Audino to bring back a teammate to full health and clean late-game.

Voting is now up and closes on saturday!

Run Away With Me

gonna go with the 'wood

Member of the Alien Nation

The next mon to be tested is...

Hmmm, not sure how much room for innovation there is with Mega Steelix... A fair amount apparently

SandyRoom Mega Steelix is scary. This set should be used on a sand team, with either Uxie or Mesprit (preferably Mesprit) providing both Trick Room and Sandstorm, and then U-Turning out to Mega Steelix so that it can destroy the opposing team. Even without Trick Room up, this thing is just an incredibly strong wallbreaker under sand, 2HKOing the entire meta except for like physically defensive Tangela and Torterra. I haven't used sand too much, but Dentricos can tell you all about it, and this thing is one of the best pokemon on it. Pair it with Stoutland and watch yourself sweep team after team
Last edited: Jan 25, 2015

I've posted in the past about this but am too lazy to find the post, but pretty much explosion megalix is a full stop to stuff like Gatr and Ludicolo trying to set up on it, living whatever they have to throw at it / setup on it and immediatly OHKO back or leave them with not enough health to sweep <5%. Pretty much, Explosion keeps offensive momentum up in that it gives water sweepers 0 chances to set up, something that is often a downside to using Lix on HO.

Did anyone say RP Steelix?

With the whole meta twisted around Mega-Steelix's bulk, the Rock Polish variant catches many opponents on the wrong foot. 216 Speed EVs with a Jolly Nature allows it to outspeed Typhlosion after a Rock Polish, though 244 Speed EVs can be used to outpace Pyroar aswell. Thunder Fang is there to 2HKO Defensive Mantine and Pelipper- Fire Fang can also be an option to hit Ferroseed if it turns out to be a problem for the team. Ludicolo is a hard counter for this set, but also a great partner, as it is able to weaken opposing Water types (e.g. Feraligatr, Samurott, Seismitoad) that can take an Earthquake and hit back hard.