thanks to kamikaze , approved by TDs , Sgt.Moose made the ribbon, artwork by LifeisDANK 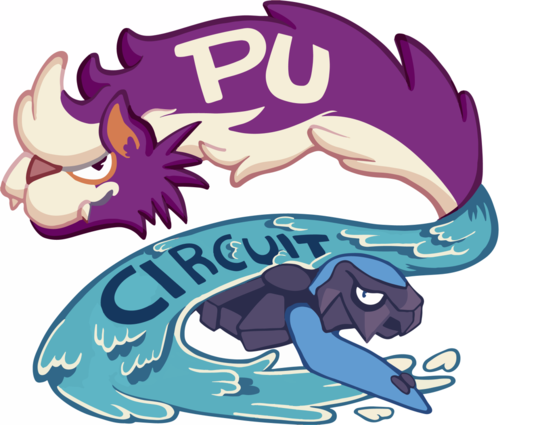 ​
This year's circuit will consist of the following tournaments, followed by an 8 man Invitational SM PU Tournament; that will decide the best PU player of the season that will be awarded the green ribbon in their badgeset!


How are points calculated?

Note that The Ladder Tour will give points for qualifying as well.


*What does BFL mean?
BFL, or Best Finish Limit, is a restriction that limits how many placings you may count for your Circuit Point totals and is also used in the Official VGC Circuit. 3 Seasonals with a BFL of 2 would only count your top 2 Finishes even if you played in all 3, and if you played less than or equal to 2 Seasonals it would count all your finishes. The idea behind a BFL is to reward high placings and not consistently average performances. It also becomes a safety net for people who for whatever reason have a bad performance, cant play in that specific season, or have to drop out midway because of extenuating circumstances.

PU Leader
The PU Moderation Team has decided that making the ongoing PU seasonal suddenly much more important due to the new PU Circuit isn't entirely fair to people who want to compete in the 2018 circuit but didn't know it was going to exist when signups were happening for the Fall Seasonal. Plus it's kind of weird that our 2018 circuit starts way before other low tiers in 2017. Because of this, we've edited the tournament schedule to include a Summer Seasonal after the Bo3 Tournament and before playoffs. We're going to arrange a different prize winner of the Fall Seasonal (to be determined), but performance in it will not be tied to the 2018 PU Circuit.

Sign Ups for the first tournament in the circuit, the Winter Seasonal!
http://www.smogon.com/forums/threads/pu-winter-seasonal-sign-ups.3626623/

PU Leader
Due to all the suspects going on, we've decided to switch the order of the circuit. Instead of the next tournament being the PU ladder tour, we've switched its place with the PU BO3 tour. Also this tour will be affected by OU's recent old gen tiering, which means that Baton Pass and Arena Trap will not be legal in ORAS.

PU Leader
The PU Ladder Tour will begin its first one-week cycle this Saturday, the 8th, hosted by yogi. The threads for all four cycles and playoffs will be in the Smogon Metagames section of the Circuit Tournaments subforum. To participate, watch the subforum or check the hub channel of the official PU discord server, where each thread will be linked around when it goes live.

PU Leader
https://www.smogon.com/forums/threads/pu-fall-seasonal-signups.3642670/
Signups for the fall seasonal, last tournament of the circuit!