The tower of the Phoenix [Under reconstruction]

The tower of the Phoenix​
Rules​
Legality definition​

My Save Games (Pandora's Box)​

As of now, a legit shiny Mew is probably the rarest Pokémon in existance.
His release has only took place back in the days in Japan, when the Old Sea Map event was distributed to the players which were in possession of a japanese copy of Pocket Monster: Emerald.
The peculiarity of such an event is that Mew will be possible to be caught as a Stationary Pokémon, thus allowing him to be shiny.
Never before, and never again it was possible to obtain a legit shiny mew.
Only followed by shiny deoxys, he still is the aim of any serious collector that wants to put his hands on the progenitor of all Pokémon. 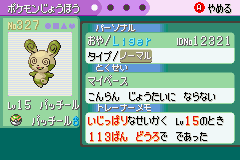 You know, Spinda is that pokemon with an immense amount of different patterns, which consists of 4 spots which are determined by its PID until gen 6.
The challenge I wanted was to have "perfect" pattern Spinda, and my ideas ended up with the conclusion the spots had to be mirrored on each side, and be realistic by covering the tip of the ears and the cheeks. But I also wanted a good nature.
The problem was that Spinda's moveset since gen 5 is the one that abuses Superpower along with its DW ability "contrary", which can't be shiny.
So, not being able to use that, I wanted to find a generic moveset which can still work using its unique gen 3 ability.
I ended up with a generic gen 4 moveset which can still be used on newer gens, which nature was adamant.
I was then able to find a perfect pattern with an adamant nature.
So the RNG begins: what I wanted was to do it as cool as possible (for me, at least), so, if the Spinda pattern was mirrored, why not the Trainer ID?
There it is, I rnged a mirrored TID as 12321.
I excluded the 0 only because it may be numerically-wise excluded while considering an integer number, while I wanted a TID that could be pronunced and written in a unique manner.
So I went ahead, and finished the SAV until I got a Frontier Pass.
This was needed as I RNGed the TID on another sav and then battled, which transferred the seed I needed to rng abuse for that Spinda.
With the save file finished with the only purpose of rnging a random ivs spinda and the seed triggered by the Frontier Pass' battle video, I went ahead and captured the aforementioned Spinda in its perfect ball, a nest ball, which recalls to its spiral eyes and his skin color.
Now, it will require some Hyper Training to compensate for the lacks of good IVs, but this will be a good addition in my collection along with a (yet to do) Dream world Spinda from gen 5 which will aim for competitive usage only.


Altough both Latias and Latios are obtainable in Pokémon Emerald, you can only choose one out of the two roamers after beating the league champion.
The Eon Ticket was an item distributed as an Event and allowed you to get the other (normally roaming) Pokémon on the Southern Island.
Another way to obtain it is to Mix Records with a game that directly had received it.
In particular, the Japanese localization of Emerald was the only one that was able to receive the Eon ticket officially without mixing records from Ruby and Sapphire.
This feature was not present in other Emerald localizations because the Mistery Events feature was removed.
In my case, I choose Latios as a roamer after becoming the Champion, so Latias was left in the wild.
I used a save file which contained an Eon ticket event directly received, and then passed it to my Japanese Emerald save by mixing the records with it.
Altough it uses the same generation Method as any other stationary Pokémon and Latias can be still normally caught as roamer in Emerald at a lower level, I still consider it a little special trophy because of its origins, and the Premier ball is a little addon, being "made in commemoration of some event".

Pokémon Box is a Gamecube game that can link to Pokémon Ruby and Sapphire, which primarly functions are to store Pokémon in boxes, hence his name, or emulate the Game Boy Advance games on your TV.
Another very unique characteristic is that it can manipulate the game algorithm and rendering introducing the so called "Method 4".
Method 4 takes place by "distorting" the method 1 and using only half of his spread, thus allowing to expand the possible IVs.
The careful all31 is a perfect example of this, which manipulates the normally generated method 1 that only has 31 IVs in HP, Atk and Def.
But, how does it work? Once the link is established, the game won't just solely use the method 4, but it will normally use the Method 1, and, only under certain mysterious conditions it can switch to method 4.
The Origin Cave is actually the hardest one to manipulate, because it has the lava always rendering and affecting the RNG.
The game can actually switch to method 4 randomly after screen refreshes that can happen, for example, after opening the Pokédex, interrupting the Lava rendering.
This will also reduce by 1 the target frame you need to hit.
In this way, you can just try the luck and encounter the groudon. If it's shiny but doesn't have the correct IVs, then you can redo all the same but open the Pokédex once more, and so on.
But, this can actually be expanded and randomized.
In the Cave of Origin, in which groudon resides, the game has no programmed soundtrack. If you hatch an egg, then the soundtrack will remain until you change room or shut down the game.
However, this action is able to manipulate the RNG.
You won't need to open and close the Pokédex anymore, because the entire process will be randomized.
In fact, even just stepping in into groudon at a different frame will change the entire algorithm.
Doing this, the target frame will oscillate differently depending when you triggered the dialog screen, and you may need to take the target-1 in much occasions, and the spread may even skip!
Another possibility, altough much rarer, is that it it will generate the Pokémon by Method 4, which may even need entire days of tries, even using the Emulator's Save States.

All my Legit Pokémon Wondercards

All my Legit Item Wondercards