ORAS OU The Voice of the Rain

Weather teams just aren't what they used to be anymore (and if you ask me, I like that they nerfed weather, because that sheisse was OP). And tbh I never ever really made a weather team because I remember how much I hated having to play against weather teams last gen and was so annoyed with them I didn't care for them. And I never made one through this gen so, I just set myself out to see what all the hype was about, (yes I know I'm like five years to late).

So without further ado, here's the team: 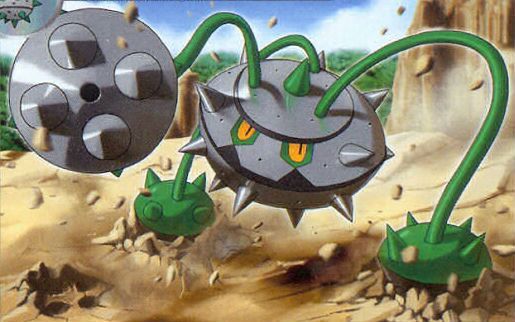 This girl is my lead. For the most part, she's a pretty straightforward Ferrothorn. Her EVs allow her to survive any hit that isn't a STAB boosted fire move. She almost always forces most other leads to switch because they don't want the Leech Seed damage, allowing me to get a free Stealth Rock or Thunder Wave. Power Whip almost always 2HKOs all water types, so that's always nice. The bringer of rain and the core of my team. Politoed's synergy with Ferrothorn makes for a fantastic wall for my team. If I know a fire move is gonna be thrown at Ferrothorn, I bring in Politoed to sponge it like it's nothing, and then force a switch with Encore or Perish Song. That in turn will get me a free toxic, or free switch in to one of my wallbreakers. Damp Rock of course provides maximum rain. And here's the first Wallbreaker. In the rain, his Hydro Pump will rip your team to shreds. And thanks to it's fantastic ability, he outspeeds the entire unboosted meta game, and Choice Specs maximizes his Special Attack astronomically. Knock Off is there since he outspeeds everything in the rain, I can take out any items that might prove to be problematic. Ice Bean for the Dragons and the Grass types who have taken Stealth Rock Damage. If he's left unchecked, he's a nasty force. Shiva is the Hindu God of destruction, and that's exactly what Swampert Does. With an amazing natural bulk of 100/110/110, she is always granted a free Power-Up Punch, and if it's raining, that can be the end of most battles right then and there. Unmatched speed and gargantuan attack, even pokes who resist waterfalls, are 2HKO'd. Earthquake another amazing STAB move, combined with Ice Punch for Dragons and Grass types, provide almost near perfect coverage that will rip teams to shreds if unprepared. If, say a grass type tries to go for one of my sweepers, He is there to laugh them off. Even if they switch out their grass type to avoid a 100% Hurricane, to be honest, no poke bar those who resist can take a Hurricane switch in and risk confusion. U-turn is to provide him with a pivot. Knock Off for those pesky items again, and Focus Blast for some extra coverage (even though I absolutely hate it's accuracy, it's still powerful and useful.) A Halcyon is a bird in mythology that appeared after storms to calm the seas. She's a Defogger/Wallbreaker/Fast cleric all in one and what more honestly could you want from a support pokemon honestly. I chose her over Latios for two reasons: Better bulk allows her to take more switch ins and attacks, and Healing Wish. Her fantastic speed guarantees her almost always, entry hazard removal, a powerful STAB Draco Meteor, and when she's about had enough, the best cleric move in Healing Wish late game to heal one of sweepers.

Hey, I've noticed recently that what actually has been causing trouble for me is Mega-Sableye. Yeah, a lot of trouble, Do you have any other suggestion besides Toxicroak that could be a counter?

keep omastar its amazing i killed ppl in ost with it (btw ez amoog hates omastar lol...also oma is base 418 in the rain jesus christ, you're way off)