Well, its everybody again. This time with an NU team, my first NU RMT actually, even though I've played it alot. This team can probably be described as bulky offense, and I kind of like it how my team are all pure types. I know X and Y is coming soon, and I really wonder what it will do to this team. Anyway, this team was tested on PO, and peaked around 1250s. The reason it couldn't go farther because I'm starting to think PO is inaccurate. I mean, there are ferroseeds, dusclops, gastrodons, hariyamas and houndooms! With that aside, lets get to the team now...

A pretty standard set, yet very effective. Serperior taunts you to see from behind those empty walls, which is great for stopping status, hazards, and trick room. Glare spreads the ever useful paralysis, and leech seed provides some useful recovery and damage. Giga drain is if serperior has nothing else to do, and is another tool for healing.

Here is an attempt at a bulky samurott. It used to be octillery, but now I see that samurott is stronger, faster, and bulkier. Samurott also has a superior defensive typing compared to lapras. Scald is a keeper. An awesome move for bulky offense. Ice beam handles grass and flying types, and encore can really screw up some setup sweepers. Hidden power grass is for those other water types. Rest could be useful. I used to put it on Octillery, but I ended up with my team having trouble against water types. Samurott is my favorite 5th gen starter, so I'm joyful I got to include him before 6th gen comes in.

I never really liked torkoal before, but man, its so useful! He gets hazards up, and spins away hazards too. Lava Plume is for even more burn spreading chances, as well as taking care of the types in lands SE damage on. Protect is to stall for burn damage, possibly leech seed, but most importantly, if a copycat roar gets out of hand. I did face a team with riolu, but I played smart so that I didn't have to rely on protect too much. Serperior and torkoal were the key players against that team, and what do you know, they are my most common leads.

Muk is the newest member to the team. I searched for a powerful, yet bulky poison in NU and I found muk. He absorbs Toxic Spikes which was a sticking problem before, and he does some decent damaging. He usually isn't supposed to go curse sweeping, I just get a curse up if I can. Curse fixes his defenses, while powering him up. HP EVs are so that Black Sludge heals more efficiently. I tried Poison touch before, but the first time I tried him, I got tricked a choice scarf :(

Spinblocker, cleric, wall, setup stopper. Misdreavus is full of perks. Shadow ball helps with ghost and psychics and makes her not taunt bait. Pain split is for recovery, heal bell saves my bulky pokemon of poison, burn and paralysis. It also is another reason why rest can be viable on samurott. Perish song is to scare off any setup sweeper, or pretty much any pkmn misdreavus fails to harm. No will-o-wisp here cause I already am spreading lots of status. The EV spread is a bit different from the smogon set, as I lowered the HP to make her take the least possible amount of residual damage, while making pain split slightly more effective, and the rest is dumped to sp.def. Both defenses are at an even number for that eviolite boost. 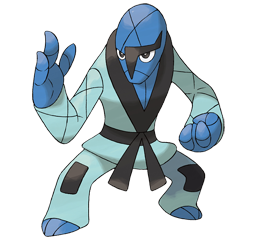 Very Standard. Sawk is my cleanup guy, he tears through the weakened teams, and punishes normal types. He is the frailest guy on the team, but thats OK.

So that is the team. Might be a bit standard, but oh well. Please Let me know if there are any outstanding problems. I'm going to miss this metagame where electric types can be paralyzed. Its only 20 more days until X and Y comes out.

Hi, everybody! This is actually a pretty decent team, but there's just a few things that I think you should consider changing.

First up is Samurott. I can see what you're trying to do by taking advantage of its decent bulk, but I don't see it as being too effective. It's a lot more suited for going the purely offensive route than using its bulk. Seeing as how you don't really have a potent special attacker, I'd suggest using the specially offensive Life Orb set that's on the site right now. With a set of Hydro Pump / Ice Beam / HP Grass / Taunt, I think it'd be a lot more effective on your team. You'd still be able to stop set-up sweepers with Taunt, but you'd also be hitting back a lot harder. Special Samurott is just really threatening right now. However, if you still want a bulky Water-type, I suggest using Seismitoad in place of Samurott. Seismitoad's typing is much better defensively than Samurott, and it also packs two immunities: Electric and Water. With Water Absorb, Seismitoad has some pretty great synergy with your Torkoal, plus it can even use Stealth Rocks so that it can free up a move slot for Torkoal. I don't think Seismitoad can really pull off a mixed bulk set like you have on Samurott, but you can try it out and see how it works.

Next up is Torkoal. I don't really have any problems with it other than the fact that you put a lot of pressure on it by making it your rock setter AND spinner. It's usually not going to be able to do both in one round. I think if you decide to add Seismitoad to your team and give it rocks, you should replace Torkoal's rocks with either Toxic or Yawn. Since you have Protect, it pairs up quite nicely with Toxic , but can create some issues with the burn chance on Lava Plume. Yawn can force a lot of things out in fear of sleep, or if your foe stays in, it puts them to sleep.

Now your Muk is pretty good overall; I just have a nitpick or two. I think you should use Brick Break over Rock Slide so that you aren't entirely walled by Steel-types. In fact, two of the three popular Steel-types in NU are Rock / Steel, (Bastiodon and Probopass) so they take 4 times damage from Brick Break. It rounds off your coverage pretty nicely. Secondly, I think you should go back to using Poison Touch on Muk. I know that losing your item through Trick shenanigans sucks, but it shouldn't be happening all to often and that 60% chance to poison with Poison Jab is almost too good to pass up.

Finally, you should be running Mold Breaker on Sawk instead of Sturdy.Mold Breaker let's you hit things that normally wall Sawk, like Weezing and Misdreavus, with Earthquake. It also allows you to break through the Sturdy of Stealth Rocks leads like Golem, Probopass, Onix, etc. Sawk is a fantastic anti-lead with Mold Breaker as it can stop rocks being set up on turn one. That means that Torkoal won't be having to take 25% damage when it comes in to spin hazards away, and just makes its life easier overall.

Well, there you are! I hope I helped, everybody! Good luck with this team!

Certain offensive Pokemon such as fast Normal- and Flying-type Pokemon can be quite troublesome to face, as you don't have a really efficient way to check most of those variants (specifically from the likes of Kangaskhan, Braviary, Swellow, Zangoose, etc.). I also feel that Torkoal niche isn't all that necessary for you in the grand scheme of things, and tends to slow you down a bit as it doesn't do much favors towards helping you out against other threats like Musharna and has trouble utilizing its high Defense stat thanks to its weakness to Stealth Rock. To help here, I would suggest that you try Stealth Rock Metang over Torkoal as it allows you to check just about everything that I've mentioned with its awesome resistances, and its ability to beat Musharna with Toxic and pick off stuff with Bullet Punch.

I agree with the Samurott suggestion on the previous rate.

As for the last suggestion to make, I'm not really sold on the current Serperior set, as the win condition of SubSeeding isn't all that helpful in the current metagame (and Serperior already has enough trouble against opposing Grass-types as is). I just feel that the more optional idea would be to go with its offensive Calm Mind set, which can net you a surprising amount of set up opportunities against special attackers and can make use of Taunt to harass most Stealth Rock users or Substitute to put yourself at Overgrow range to score a really powerful hit on something that you can't boost as much against.

You should definitely run Poison Touch on Muk. This is because with Poison Jab, you have about a 51% chance to inflict Poison on your opponent and on a defensive team with no other status inducers, this is pretty cool. Sticky Hold is pretty worthless most of the time since you're forced out by the Psychic-types that can Trick you, and is really only useful against Gurdurr or Rotom-A. Most opponents wouldn't Trick you either way because of Black Sludge crippling them. You should also run Shadow Sneak over Rock Slide on Muk, in order to defeat Jynx and weakened Gardevoir, give you a priority move, and possibly allow you to chip off some damage and poison the opponent before Muk goes down.

I also suggest Will-O-Wisp over Perish Song on Misdreavus. This allows Misdreavus to beat Skuntank, Iron Fist Gurdurr, and a myriad of other physical attackers which would otherwise force it out. Perish Song isn't really needed as a win condition anyway, because you already have win conditions in Muk, Serp and Sawk.

I agree with what everyone else said, but I have one more suggestion. Assuming you take Ranger Dell's advice and replace Torkoal with Metang, your team seems to lack a way to deal with bulky Grass-types such as Exeggutor and Vileplume. Additionally, if Pokémon like Carracosta or SubSmash Gorebyss are able to boost against you (which they are), you don't have much of a way of dealing with them. I would suggest replacing Sawk with Scarf Jynx, who can threaten out Grass-types with ease and revenge kill Costa and Gorebyss without much hassle.