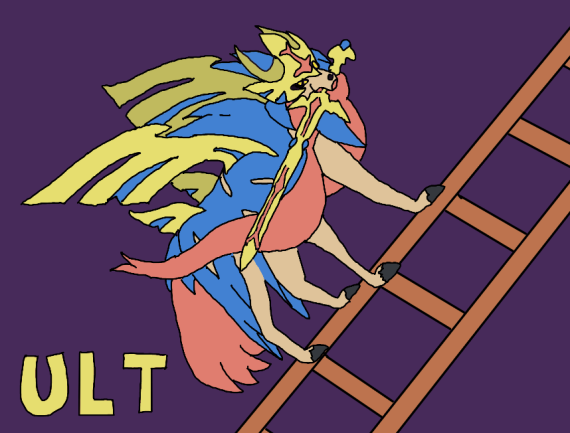 Art by Chloe :3​
Welcome to the second iteration of the Ubers Ladder Tournament! This tournament aims to give exposure to both upcoming players and veterans alike by having them compete to the top of the leaderboard on the Ubers Showdown ladder on newly made accounts over 2 cycles, where the top 8 from both of them will enter a single elimination bracket. Corresponding to the Ubers tournament circuit; This Tournament will award Type A points.

Ubers Ladder Tournament is split into two stages as broken down below:

Players wishing to participate should post their signup within this thread (for Cycle 2), along with registering a completely fresh Pokemon Showdown! account corresponding to the selected tag of the cycle. It is important to ensure that the account registered matches the tag selected for the cycle, otherwise your signup will be ignored. With every new cycle, you will be expected to register a new alt (each cycles tag will be different to enforce this ruling). In this actual laddering portion of the tournament, players will attempt to climb the [Gen 8] Ubers ladder, with the ultimate goal of achieving a spot in the top 8 of that given cycle. Those who manage to claim one of those spots will be entered into the playoff phase that will be broken down below in Stage Two. All qualified players will be assigned a seed from 1 to 16 (8 players within the 2 ladder cycles) based on the elo they finished with at the deadline of the cycle, with the #9 and #10 players of each cycle becoming potential substitutes, should they be required, with the order of substitutes also being determined by Elo. Both qualified players and substitutes may, of course, play again during the next cycle, as they can potentially improve their seed or directly qualify.

Players caught using pre-registered accounts will be disqualified from the tournament with absolutely no exceptions.

Following the two cycles of stage one, the top 16 players will play off in a Best of 3 SS Ubers single elimination tournament bracket to determine the winner. Tournament brackets pairings will be determined via seeding (Taken from overall ELO scores of all ladder cycles). For example, the #1 seed will face seed #16 and #2 playing #15 etc.

If you wish to participate in Cycle 2, sign up in this thread on a fresh alt starting with the tag ULTW5R (for example: ULTW5R Cynara). The laddering period begins right now, and will run up until the Cycle 2 deadline, which is on Monday, 25th May, 5pm GMT+1.