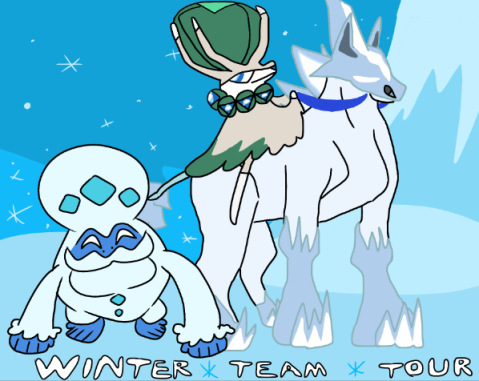 art by Fusion Flare ​
Welcome to the first edition of Ubers Winter Tour, an all-Ubers team tournament where managers draft from the pool of players to compete in a five-week round-robin battle for Ubers supremacy. Additionally, each week, managers can decide to boost one slot, making the slot effective for 2 wins (and if both teams boost the same slot, it's worth 3 wins). The two teams with the most wins will then advance to the finals.

Hello everyone, this year your hosts are MrAldo and myself.

1. Managers are allowed one (1) Assistant Manager.
2. Managers and Assistant Managers may self-purchase prior to auction for 20,000 credits each.
3. There will be ten (10) starters and three (3) substitutes: the minimum number of players on a team is thirteen (13).
4. The maximum number of players on a team is twenty-six (26).
5. Just as with SPL there will be a severe penalty for any team that picks up a known alt of a banned player, or any player masquerading as another person. It is important to establish that both parties will be penalized immediately and appropriately if they are found doing so.
6. You will not be allowed to play in a tier you did not sign up for the first three weeks.

To be considered at auction, you will need to post with the following format:

You must signup with exactly this format as we will be using an automated tool to convert signups into a spreadsheet. We ask for your name for organization reasons and for the auction. The metagames played are those that you have experience in and are capable of playing in a tournament setting. Do not post a metagame that is not one of the featured tiers. Timezone is your local time relative to GMT which helps tell managers how it will be like to coordinate. Inactivity is simply if you have any extensive period of time where you will be unavailable, (for example, gone on vacation for a week) this is incredibly important for the managers to know so that they can do their best to make sure the team doesn't suffer from inactivity.

After signing up, the next step is to go advertise yourself to teams to increase the chance of getting bought in the auction. The best way to do this is to go onto their individual Discord servers and follow whatever process they have for tryouts.
Last edited: Jan 9, 2022

Name: May
Metagames Played: RBY / USM
Timezone: GMT+0
Inactivity: I'm in the UK so I may get shanked or smth in a back alley
Last edited: Jan 6, 2022

Head TD
Name: Amaranth
Metagames Played: GSC / BW / RBY
Timezone: GMT+1
Inactivity: i wont build my teams in bw. will do in gsc. never played a game of rby ubers before in my life draft at your own risk for that

Name: Daniel The Immortal
Metagames Played: GSC, will do any other if needed though
Timezone: -6
Inactivity: N

Name: Mishlef
Metagames played: ORAS/SM/ RBY (not the most experienced in rby if Im being honest)
Timezone: -5
Inactivity: Overlap with 1v1 PL potentially will be less active then

Smile of the Orchid

Name: Ainzcrad
Metagames Played: SS/SM/GSC the rest with teams
Timezone: GMT+1
Inactivity: Exams but Will be around for testing etc