Close call, and in spite of how much I hate this set I'll vote for BFM's Cosmic Power Mew Screens HO

Moderator
I’ll be voting for BigFatMantis, next round i’ll be making my return!

gratz to BigFatMantis for winning last week. With the ban of Terrakion the following has gotten a lot better:

I would like you to build around Lycanroc-D this week as it no longer faces competition as a Rock-type wallbreaker. Access to priority in Accelerock is greatly valued right now to deal with threats like Alakazam, Galarian Moltres, and Thundurus. It has a great movepool letting it work around more or less all of its checks so I am interested to see what you come up with.

The deadline is the end of Friday

Double Priority team with lycan-d (obv) and scizor. With Scizor and Slowking they are able to come in safely with u-turn and teleport, and they become infinitely more threatening when you add Slwoking's future sight into the mix alongside their already dangerous attacks. Bulu provides grassy terrain for pokemon such as slowking, krook, lycan-d and itself to prevent from being worn down so easily by life orb or by weak hits. Salamence supports lycan by providing a fighting and a ground resist/immunity and help combat the amoongus, and tangrowth with its max invested hurricane's. Krook is the rocker for the team and provides intimidate to help switch around stuff like dd mence, zeraora, and itself, knock helps soften teams up by removing boots, scarves, lefties, and helmets to aid lycan-d in order to clean up late game.

Aegislash won't be included this week (not sure how I shall go about incorporating that Pokemon into the next 2 weeks). Given that nobody has submitted a team with Victini yet I will just ban it for this week too.

So no Aegi and Victini

Vali (Obstagoon) @ Flame Orb
Ability: Guts
EVs: 252 Atk / 4 SpD / 252 Spe
Jolly Nature
- Facade
- Knock Off
- Close Combat
- Obstruct
This team is built around the core of Lycanroc-Dusk and Salamence. Not only are these two some of my all-time favorite Pokémon, but they also form a pretty good core with each other. Salamence takes care of almost all of Lycanroc's weaknesses; it has a Ground immunity, resistances to Fighting and Water, and a four-times resistance to Grass. Lycanroc-Dusk, on the other hand, can deal with Ice-types for Salamence. There is still one thing that this core struggles with, however, and that's Steel-types. I was going to put Victini here to fill that role, but then the council quickbanned it out of nowhere. :cri: So instead, I decided to go with a special-attacking Fire-type that I think shows a lot of potential in the minus-Victini plus-Aegislash meta, and that's Chandelure. Choice Specs Chandy hits really hard while also crippling would-be checks (looking at you, Aegislash) with Trick. Next I wanted a Grass-type to deal with Lycan and Chandy's shared weaknesses to Water and Ground. I went with Tapu Bulu because of its ability to set up Grassy Terrain, which offsets Lycan's Life Orb damage and somewhat rectifies Chandy not running HDB. Next up is Alakazam, which I chose to help deal with Bulu's four-times weakness to Poison. There's been a lot of whispering about this thing being broken in the post-Victini meta, and it's not hard to see why. Last up is my boy Obstagoon, which I think will be one of the best counters for Aegislash for the brief time we have it. This thing literally does not care about Aegi's SubToxic set, and the Obstruct/Knock Off combo sends it into next Tuesday. Goon also has great synergy with this team; Grassy Terrain helps offset Goon's burn damage, and it forms a solid Psychic/Ghost/Dark core with Zam and Chandy.

Milotic (F) @ Heavy-Duty Boots
Ability: Marvel Scale
EVs: 248 HP / 144 Def / 104 SpD / 12 Spe
Calm Nature
- Scald
- Flip Turn
- Ice Beam
- Recover
After Terrakion and Victini were banned, and this went up, I decided to play around a bit. I started with Thundy+Lycanroc, as Thundy abuses a lot of Lycanroc's answers, and vise versa. Krook gave the team some intimidate support, rocks, a psychic immunity, overall just a useful mon. ScarfRachi is speed control, and Rotom provides another Scizor answer and pivot/hazard control. Finally, I wanted to give Milotic a fair shake after maybe being too overzealous about certain samples, and it happens to work really well here.

Moderator
Not exactly related, but a cool song i wanted to share :)
I wonder if i'm the only one who listens to all the songs..

A relatively (relative to me) basic team with a bunch of wallbreakers and cleaners. Bulu and Keldeo make for great partners with Doggo as they're able to break Ground, Steel and Water checks. Salamence is just a super fun mon to use right now, being able to break past so many teams after a boost. Zeraora is honestly just a staple of the tier, also being able to clean up with Lycanroc. I've never really used Chandelure on a team before, but it now being the premier offensive Fire-type it was able to fill the Victini-shaped hole in my heart and proved itself very useful.

A replay of me using the team and Doggo cleaning up: https://replay.pokemonshowdown.com/gen8uu-1299012740-iwl8sct9g97xva3o2ulvus3yy7f5fdfpw

Also, Twi set me up 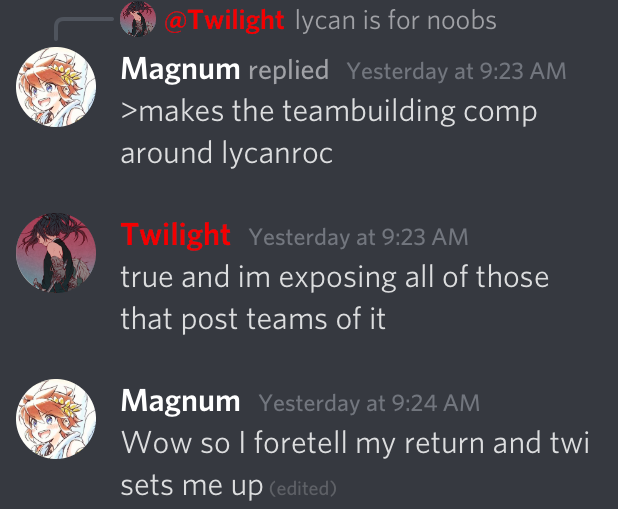 Have till end of week

Moderator
Voting for Sickist, I’ve now made a bunch of teams with Lycan + Thundy and my eyes have been opened

Gratz to Sickist for winning.

I shall just make this week on Aegislash as we may not have another chance to build with it if it isn't freed. So submit your best teams with this Pokemon. You can run any set you want on it.

The deadline is the end of Friday.

Sleeping Powder (Amoonguss) @ Rocky Helmet
Ability: Regenerator
EVs: 252 HP / 220 Def / 36 SpD
Bold Nature
IVs: 0 Atk
- Spore
- Giga Drain
- Sludge Bomb
- Foul Play
This team was built for the suspect but I've been really busy lately so I'm not sure if I'll be able to get reqs. But anyways I now have an excuse to post this team as a submission LOLOLOL. This team is built around Autotomize mixed Aegislash, which is a really heat and interesting set that attempts to fix what is seen as Aegi's biggest weakness: its low Speed. Slowking and Incineroar are able to bring in Aegi easily with Teleport and Parting Shot respectively, and also form a solid Ghost/Psychic/Dark core with it. Nidoqueen is the rocker of the team and a powerful special attacker in its own right. Thundurus-Incarnate provides a very fast U-Turn as another way to get Aegi on the field while also dealing with Water-types like Keldeo and Primarina. Finally, Amoonguss forms a Regenerator core with Slowking and can Spore enemies to give Aegi even more opportunities to set up.

Keldeo-Resolute @ Choice Scarf
Ability: Justified
EVs: 4 Atk / 252 SpA / 252 Spe
Hasty Nature
- Flip Turn
- Secret Sword
- Hydro Pump
- Air Slash
This team has as its main breakers obstagoon and mixed aegislash, obstagoon has been fading from the meta because of the very popular phys def grasses and double regen cores which aegislash is very useful against.
These two can fall back on the very reliable defensive backbone that is Rocker Kommo-o, Deffoger Heatom and AV Tangrowth.
I opted for tang instead of amoongus because alakazam is growing incredibly popular.
Those 3 + Obstagoon literally invalidate every single thing that opposing aegislash wants to do.
Finally Keldeo is there mainly as a speed control faster than zeraora that also beats nidoqueen since the team was kind of lacking in those two aspects.

Tangrowth @ Rocky Helmet
Ability: Regenerator
EVs: 252 HP / 252 Def / 4 SpD
Bold Nature
- Giga Drain
- Knock Off
- Sludge Bomb
- Sleep Powder
The more I build with Aegislash, the more I realize how much this mon sucks. Seriously, when we unban this, its like barely A- material, as 9/10 times I would rather have Scizor or Jirachi. Anyways, I decided to get wild and pair Aegislash with Toxtricity. Toxtricity goes ham on the majority of Aegislash's answers, and vise versa. Aegislash can also Sneak through Alakabroken, which is a mon that always just comes in for free after Toxtricity claims a kill. Salamence gives the team a ground immunity, which is needed when you pair a steel and an electric/poison. Mence also defogs, which is super nice considering the lack of boots on this team. CM Keld gives the team a little bit of speed control, another way to get past Chansey or Umbreon, as well as a last minute answer to Knock/dark resist in general. Scarf Krook unfortunately is the rocker and speed control. This time, I'm using Beat up to get past Sub Zam, which is a bitch for this team otherwise. It also helps out with stuff like Sub Kyurem and the uncommon Mimikyu. Finally, Tangrowth gives the team a way to not auto-lose to Ground types with Rock coverage, Azumarill, and gives the team an actual Knock Off switch in. The team has some issues with SD LO Scizor, Mamoswine, and Rotom-Heat, but every team is weak to something.

I think that, everyone really enjoys a good fun stall team, so I submit this Aegislash stall for everyone to enjoy and use. The classic toxic/sub Aegislash is the crux of this team. Umbreon is an interesting touch here, but it acts as a good wisher and also takes pressure off Chansey to rely on status healing, and it can help counter other Aegislash teams (eats a CC and KO's with Foul Play in return, tanks all special Aegi sets). Umbreon is also so important to check the OP offensive Azelf teams. Tangrowth w/ Fling is there to eat up stupid Choice Trickers who think they're smart by Tricking scarves onto a stall team, and acts as a great knock absorber. The rest is fairly self explanatory for a stall team. Enjoy!

Torkoal is our Sun setter. Heat Rock over HDB because we want all the Sun turns we can get. Moves are standard except for Yawn. Another mon gives us Rocks, so Yawn helps Torkoal stop being so passive by threatening sleep. Since we have two Rock weak mons and no Boot users, Hatterene helps keep the field clear. It also helps break stall and checks Goltres. Next is Venusaur -- the usual set, with Weather Ball to hit Skarm and Celesteela. Mixed Aegislash chips stuff like Nihilego for Venu to sweep easier. People don't seem to expect a Shadow Sneak to take out something weakened with CC or Shadow Ball either. Rhyperior gives SR and a much needed Zeraora check. The EVs hit a Lefties number; it's a balance between keeping HP and Attack high. Darmanitan is a nuke -- click Flare Blitz under Sun and something is dying. It's also speed control and a pivot with U-Turn.

There ya go, there's Aegisun. Give it a spin!

I am going to extend the voting period until the suspect results are announced. This will likely happen mid-week so you'll have a shorter period of time to build depending on how late results are revealed. I will likely just make the remainder of that week be a past gen of my choice. As for the teams you can vote for this week:

Moderator
there is a toxtricity, so the I have to vote for sickist