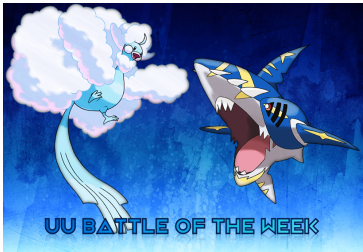 ​
Hello, and welcome to UU Battle of the Week! Every week, you, the community, will have the opportunity to create a matchup for everyone in the UU Forum to enjoy.

This thread is mainly for the newcomers to SM UU so they can see some of the best minds in UU at work. However, the veterans also have something to prove as they can show off to everyone just how good they really are! This can also let the experienced SM UU players show off their creativity with movesets, Pokemon, etc.

This thread will work in a 3-phase format. Nomination Stage, Voting Stage, and Battle Stage. This process will be repeated every week. Here, I will detail each step of the process:

As mentioned in the introduction, everyone gets something out of this. Newcomers get to see battle strategies that the experienced players talk about around the forums being used in real battle situations. Experienced players get to show off their creativity and see who the best may be. And, of course, we all get a good series of battles to watch every week!

It's finally up! Nomming pokeisfun vivalospride and 'sei. because I've got a sick and twisted sense of humor.

Ok so here are the top 5 voted people. There was a tie for 5th between misa, viv, euph, and sacri so they will be in the ballot which gives you 8 people to vote for (you can vote for any of these 8 people).

Vote for ONE person only and that person can't be yourself. Get your votes in by Friday (tomorrow) at 10 PM PST. Thanks!