isnt scarf kart spamming knock/ SD clamming kills/ CB kart being stupidly strong not enough, i dont think there is much of a switch in. no mon likes getting their item removed, nor can pokemon stand up to SD

I highly doubt that kartana will drop (bulu and rillaboom) and blaceph will surely stay OU the only thing that has a chance of dropping is salamance which defo wont stay.

Heres my own tier list that I quickly made, Out of it I dont think Moltres, Latias, Victini, Fini, Volcanion, Buzzwole (until zygarde gets banned) will drop but other than that I feel like most of the placements are pretty self explainable but I could be wrong about some. Excited the most for Stakaka tr and boots archeops and banded tyrantrum the most.

isnt tapu fini such a good fogger, it also can soft check urshifu, rapid, and drei to an extent. I feel like rillaboom or bulu will drop due to them fufilling similar roles and if one of them does it better the other one will surely drop. Articuno may be way better on stall due to boots and no sciz as of rn 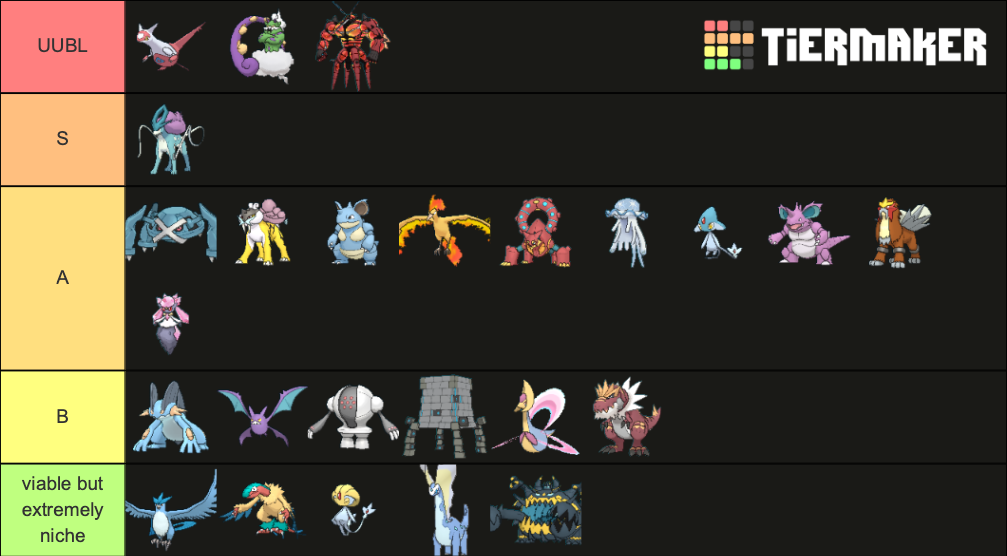 i dont see victini dropping as a lot of the mechanics / deleted moves seem to work in its favour. trick being unblockable now makes scarf sets more annoying and no pursuit makes v-create harder to punish, + boots sets blah blah blah. that being said i know jack shit about ou so maybe it'll drop

i cant see a world where lati is balanced in this tier. new coverage options + no pursuit + its speed tier being even more valuable just screams broken to me. torn's only counter is hurricane misses, i feel like it really doesnt even need other special coverage cause most of our flying resists are sucky. it can probably run dumb sets like np / cane / superpower / knock and just abuse its speed tier until everything is in +2 cane range and then u pray u hit. cool mon. buzzwole was broken as hell in gen7 and i dont see any reason why it wouldn't be in gen8 other than like weezing maybe? idk

i think suicune has the potential to really warp the tier, mainly because it uses most of the water resists people like as setup fodder (looking at the slowbrothers). it has a good to decent matchup vs a lot of the other new mons and its dropping with likely 3 new tspikes setters. granted that means there'll also be 3 new tspikes absorbers so maybe this isnt as big a deal as i think. it also lost pursuit support this gen so maybe winning with it in longer games will be more difficult than i think. expecting all the water immunities to get a lot better, toxicroak being viable again will be cool

other shit i think will be interesting:
azelf - pursuit being gone makes this thing a hell of a lot better. in gen7 any set that wasnt sash lead (or adrenaline orb ig) maybe killed one thing and then got pursuit trapped so it was really hard to justify using. its speed tier is amazing in this tier and it has plenty of versatility between cb / np / scarf / lead + a lot of good coverage and support options, and teleport exists now so its way easier to get it on the field. should be real fun to use

trick room - cress, uxie and staka dropping gives the playstyle way more options for setters. marowak will likely still be around to click buttons with tr up and i think theres some underexplored options for other tr abusers like sd bewear / panda. can't wait to have another form of cheese to lose to at preview

various shitmons: aurorus returning means cynde will build some cancerous veil team that'll dominate the ladder for a week, as if cheese wasnt already annoying as it stands rn. boots archeops will be fun but i think it'll still need a good amount of support to work well, though it very well could be better than im giving it credit for. articuno will probably get some use on stall teams but i think stall will still continue to be not great. guzzlord will be ass but it counters the teacup so someone will nom it to c-, causing unbadged users to come out in droves to uphold the integrity of the great c rank of the smogon underused viability rankings. godspeed kings 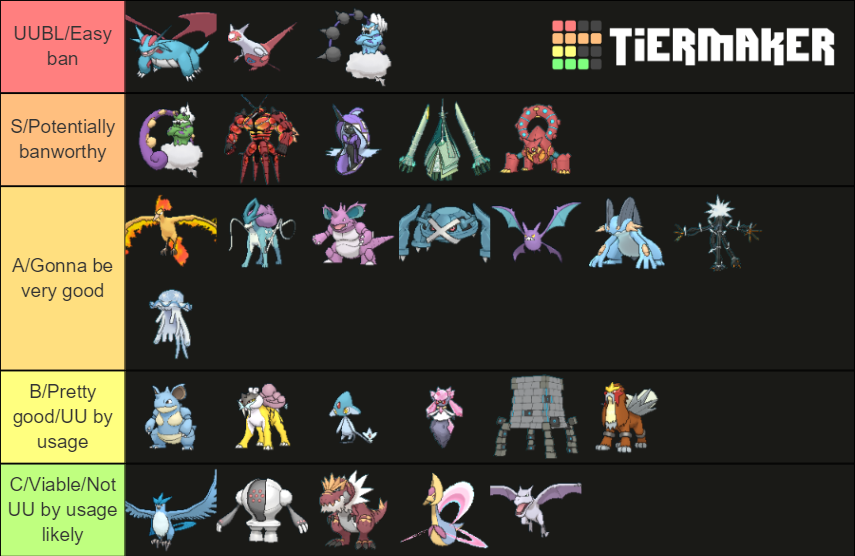 Final Predictions before DLC drops in 3 days. most of the stuff here is pretty obvious, though i will explain my S ranks.
Buzzwole will by a great physical wall and while he may be very good, flying types have become better this gen thanks to heavy duty boots, meaning buzzwole may be balanced out by the flyers. Tapu Fini and Volcanion are mons I am unsure will even drop, but if they do they might be either too much or very good, not too much to say about them. Celesteela will be very good and it even gets cosmic power, so it will be fantastic. lastly, i personally think torn-i will be fine but i can see it being broken or suspected. Nothing much left so say, excited for DLC 2, we get all these new mons plus many old OU mons to use. I'll be hectic, but it'll balance out and we will be left with an altered, cooler metagame. Also, unban lycanroc-dusk and weavile when dlc 2 drops, both look to be fine. Maybe at least retest them alongside gyarados, diggersby, durant, and primarina if we get it back from OU.
You must log in or register to reply here.
Share:
Reddit Pinterest Tumblr WhatsApp Email Link