Budget too low for Art

Due to the UU Circuit, UUPL and Fire-types burning our funds, you will have a limited budget for teambuilding. You're given $50, and the price of a Pokemon is based on their placement in the Viability Rankings. So for example, Scizor will take a large amount of your budget, 15$, while the cheap alternative Durant will only cost you 5$. This tournament tests your teambuilding skills on a whole new level, forcing you to build your team around the budget you're given. 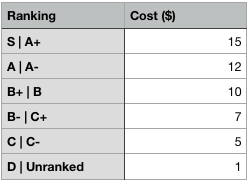 Signups will be up for a week starting now.

Krookodile has recieved the most usage % week 4 and had a strong win percentage, Krookodile and Mega Aerodactyl (who also saw a large amount of usage) are each $5 extra, people love pursuit!
Last edited: Apr 30, 2019

In to use the best budget mons

In. I'm going to get past my first match one of these days!

tfw half your teams already make the cut