Heya! I'm pretty new to this whole competitive scene, Gen 8 is the first time I've done any serious team-building in Doubles. I've had a lot of fun with a team focused around Alcremie (I've been winning about a third of the games I've been playing, which is great numbers for me!), but was wondering if it could be made better (ideally without compromising the aesthetic of "a bunch of mardy goths and their inexplicable cute cream friend). Thanks in advance!

Here's the squad so far: 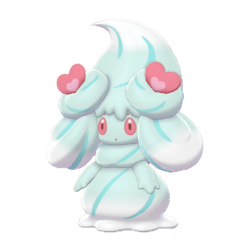 THE CREAM (Alcremie) (F) @ Sitrus Berry
Ability: Aroma Veil
Level: 50
EVs: 252 HP / 4 SpA / 252 SpD
Calm Nature
IVs: 0 Atk
- Decorate
- Protect
- Dazzling Gleam
- Mystical Fire
Alcremie is the star of the show here, making use of that solid special bulk and her great signature move, Decorate. Its offensive capabilities aren't much to write home about and it's not the fastest thing in the world, but being able to give a sharp increase to a partner can really help make up for that. Dazzling Gleam has come in handy a bunch of times, taking out those pesky Dragons, and Mystical Fire is there as an answer to all the Steel-types. Protect and the Sitrus Berry are there to help Alcremie survive that much longer, even as all the glass cannons I have drop like very powerful flies, ready to administer buffs. Aroma Veil seems to be the lesser-used of Alcremie's abilities, but it's come in very handy for avoiding Taunts and Encores. Ideally this set would have Gigantamax Alcremie, with G-Max Finale healing up my attackers to keep them going for longer, but it's also worked pretty well with standard Alcremie. 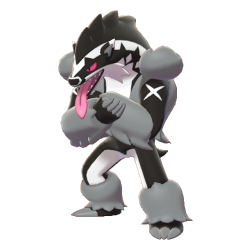 Party Cannon (Obstagoon) @ Flame Orb
Ability: Guts
Level: 50
EVs: 4 HP / 252 Atk / 252 Spe
Jolly Nature
- Obstruct
- Facade
- Knock Off
- Close Combat
Obstagoon is a fairly straightforward Pokémon to use, and it pairs really well with Alcremie. I typically start off with a Decorate and an Obstruct, ideally getting that harsh Defense drop along with a Guts boost from the Flame Orb AND the boosts from Decorate to really wreck shop. Obstagoon is also way bulkier than I gave him credit for when building this team- the weaknesses to Fighting and Fairy are rough for sure, but this nasty badger can really take a hit and keep on ticking. Guts-boosted Facade hits like an absolute truck, Knock Off is really useful and I use Close Combat more for Max Knuckle, but it's still definitely a handy tool in Obstagoon's weirdly expansive toolbox. 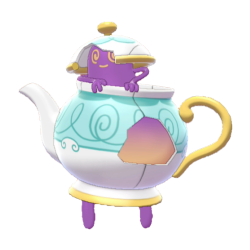 Earl Grave (Polteageist) @ Focus Sash
Ability: Weak Armor
Level: 50
EVs: 252 SpA / 4 SpD / 252 Spe
Modest Nature
IVs: 0 Atk
- Shell Smash
- Shadow Ball
- Giga Drain
- Stored Power
Polteageist is a Pokémon I'm really glad is competitively viable, and it also partners really well with both Obstagoon and Alcremie. Polteageist's main niche is Shell Smash, which in conjunction with Weak Armor and Decorate means this little teapot can become a real threat in a very short space of time, albeit a frail one (hence the Sash, which has saved my bacon on multiple occasions). Giga Drain gives it some more survivability and takes out the Gastrodons that otherwise prevent Dracovish from having any fun, and Stored Power is bonkers strong with all the buffs this things gets through its moves and mates. 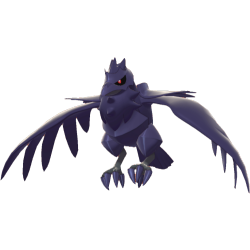 Cycrownus (Corviknight) @ Leftovers
Ability: Pressure
EVs: 248 HP / 8 Atk / 252 SpD
Careful Nature
- Bulk Up
- Brave Bird
- Roost
- Body Press
Corviknight here was designed as a defensive Pokémon to balance out all the all-out attackers on my team as well as the specially-defensive Alcremie, giving the squad a little bit more survivability. Bulk Up and Roost are there to ensure this bird stays in the fight for as long as possible, Body Press is another method of dealing with the Steel-Types that would otherwise ruin Alcremie's day and Brave Bird is a last-ditch way to blast through pesky Grass or Fighting-types. However, much as I love Corviknight it hasn't really been pulling its weight in battles- it's defensive for sure, but it never really capitalises on that defense in the ways I planned for it and more often than not gets sidelined for Dracovish or Gothitelle. 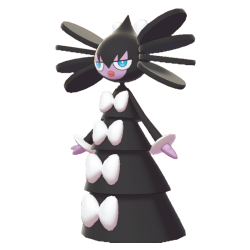 Funny Name (Gothitelle) @ Mental Herb
Ability: Shadow Tag
EVs: 248 HP / 8 SpA / 252 SpD
Sassy Nature
IVs: 0 Atk
- Imprison
- Psychic
- Trick Room
- Heal Pulse
Gothitelle is here pretty much just for Trick Room users- the moment I see one, I send Alcremie out with Gothitelle, who uses Imprison to stop any setting up before it begins, and Shadow Tags so any one of my attackers can take out the Trick Room setter. It's always super funny when that happens, and although Gothitelle is a one-trick pony here it does that job pretty well. Psychic can also help soften up opponents for my attackers to finish the job, and I've tried out using Thunderbolt too as an answer to your Togetics and Togekisses but it doesn't really hit as hard with that so Heal Pulse seems like a more useful move to have there. 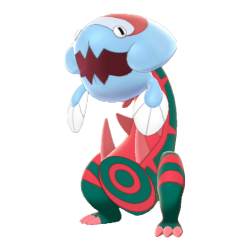 Trüllbus (Dracovish) @ Choice Scarf
Ability: Strong Jaw
EVs: 252 Atk / 4 SpD / 252 Spe
Jolly Nature
- Fishious Rend
- Psychic Fangs
- Crunch
- Outrage
You guys all know the deal with Dracovish at this point- Trüllbus' job is to eat crime, and by "eat crime" i mean "click Fishious Rend until there aren't things to click Fishious Rend at any more." As well as that big nasty bite, it's also got Psychic Fangs and Crunch to capitalise on that Strong Jaw boost and take out anyone who might resist a Fishious Rend, as well as Outrage as a backup move against any Dragons (because there are a lot of Dragons about, and they all like to bully Alcremie before she can Dazzling Gleam them). However, much like Corviknight Dracovish often ends up getting sidelined in favour of Obstagoon and Polteageist, and because its Fishious Rend is so damn terrifying a lot of teams already have an answer to Dracovish like Gastrodon or Freeze-Dry, which in a lot of scenarios means it gets offed before it can rend anything, fishiously or not.

Hope this is all good, like I said I've been having a lot of fun with Gen 8 competitive so far and would love to get those percentages up a bit more!

Thought I'd bump this thread with a few updates! I've refined it a bit since making this post and recreated it on cart, where I've been winning around 50% of the games I play-that's a whole 20% more than when I started! A pal of mine has also been testing it out on Showdown with a lot of success.

First change is I replaced Bulk Up on Corviknight with Iron Defense, which has worked wonders for its presence on my team by boosting the power of its Body Presses (nobody sees it coming), and compensating for the greater EV investment in special bulk. Corviknight has pulled me through so many battles through sheer bulk alone and I was a fool to even consider getting rid of it.

The second change is I replaced Dracovish with a new member; 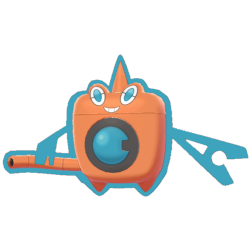 Kremzeek (Rotom-Wash) @ Wiki Berry
Ability: Levitate
Level: 50
Happiness: 160
EVs: 252 HP / 44 Def / 60 SpA / 148 SpD / 4 Spe
Calm Nature
IVs: 0 Atk
- Hydro Pump
- Thunderbolt
- Will-O-Wisp
- Protect
Rotom is here as an answer to Flying-types like Togekiss who'd otherwise give my team a lot of grief, and also handles the Pokémon that Dracovish previously worked for with Hydro Pumps (and Max Geysers). Will-O-Wisp is also very useful for shutting down physical attackers, and Protect is there to give Rotom a little bit of extra survivability, since most opponents tend to target it over anything else when it's on the field (the Wiki Berry helps too). Another fun quirk of Rotom-Wash is that because it's, yknow, a washing machine, people regularly forget it has Levitate and try to use Max Quake or other Ground moves on it, which is always fun. 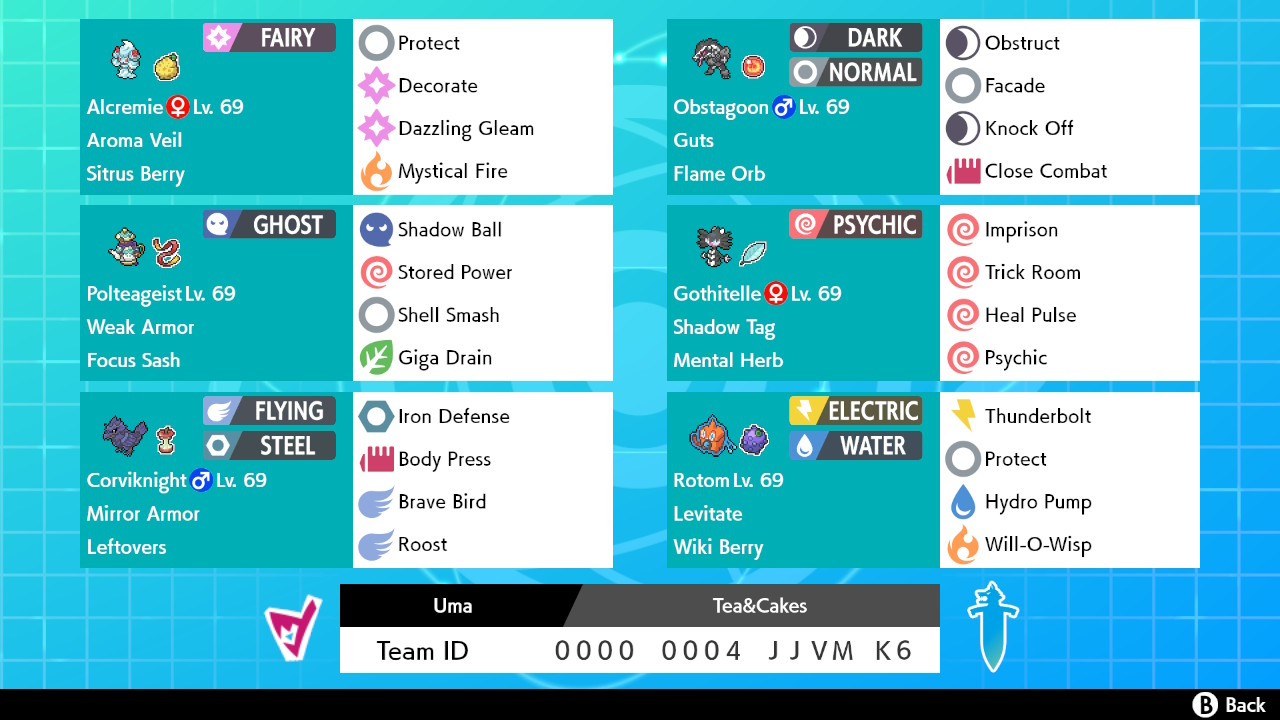 Here's a code for the team if anyone wants to rent it!

I respect the build, but I personally would replace the Mystical Fire with Helping Hand.

Love your team. I've been struggling to use Polteageist and this whole composition and coverage sounds amazing. I also like the way you use Alcremie, haven't tried one myself but I'm definitely looking forward to.
You must log in or register to reply here.
Share:
Reddit Pinterest Tumblr WhatsApp Email Link