I got so much time today Made this one about a month and a half ago but still fairly accurate. got my own here, just made it 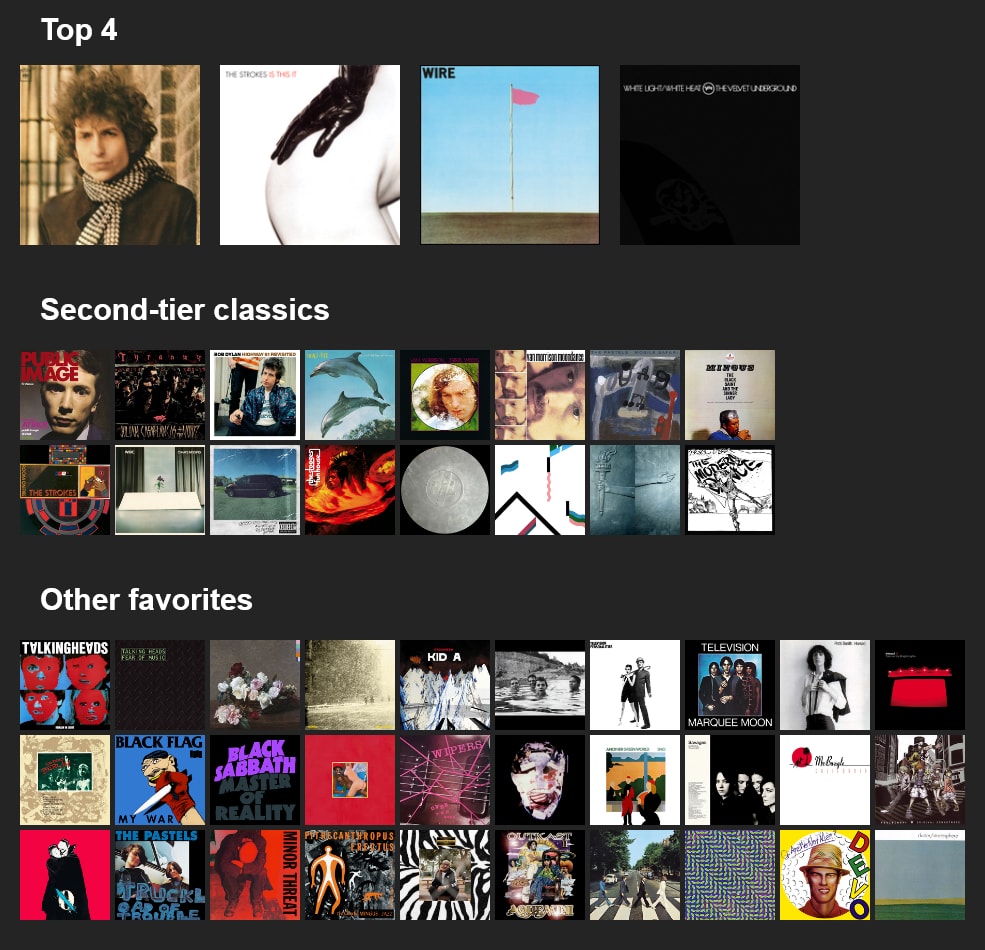 I see good taste in this thread, all of you should come to The Studio on PS

This is mine. As you can see I'm mostly into classic rock / psychedelic rock. It was tough for me to sort through and individually rank each album, so I didn't. The rough idea is about right although the actual placements are not entirely accurate. Abbey Road is easily my favorite of the Beatles' albums. The album flows almost perfectly, culminating in the perfect composition of She Came In Thru the Bathroom Window --> Golden Slumbers --> The End. I do not believe this album has any flaws, and if they exist they are very minimal. Every member of the Beatles is at their peak during their time as a band and perfecting their experimental style that they had been attempting to refine in albums like the White album. The Doors debut album is next, again it just flows perfectly and ultimately culminates in one of the best live songs to ever be performed, The End. Unfortunately the Doors never really lived up to their debut album in later iterations but were still very good. Zeppelin 3 is up next. Page is a huge influence on me, and I find his raunchy style of playing absolutely incredible. Bron Y Aur is a classic as fuck song and I love the bluesy / "campfire" type influence this has as opposed to the hard rock style that a lot of people like in zeppelin iv and their debut album. Lastly Flatbush ZOMBiES are probably my favorite hiphop group out there, neck and neck with A$AP Rocky though Rocky has been getting a little stale lately for me. Flatbush is so fucking talented its unbelievable. Between their ethereal beats composed by Erick "The Architect," the bars and aggressive style of Jewice, the imagery that Meechy Darko's bars invoke along with the cleverness and his distinct voice. One of the bars from the opening song, The Odyssey, comes to mind to invoke the skill of Meechy Darko: "Silence as the semis shooting sideways at your siblings / excuse me for the sibilance beginners study and listen." Literally everything about this group is amazing and I could talk about them forever. Oh yeah, they also have a ton of solo work on Soundcloud, with Erick having at least 2 full albums, one instrumental type album and several singles. The rest of the albums were mostly filed in order of albums that immediately came to mind, they are in no particular order (except the difference between second tier hits and other classics).

I don’t like putting stuff I like in order and I’m not even sure if I’m forgetting about stuff I’ve heard and liked, which would undermine any kind of ranking I do. As such I’ve just done an unordered 5×5 grid instead. I should probably set up one of those MAL-type things for music sometime but I’m lazy. Might do one for OSTs or singles sometime but that took me 45 minutes so fuck doing that right now.

Martin said:
I don’t like putting stuff I like in order and I’m not even sure if I’m forgetting about stuff I’ve heard and liked, which would undermine any kind of ranking I do. As such I’ve just done an unordered 5×5 grid instead. I should probably set up one of those MAL-type things for music sometime but I’m lazy.
Click to expand...

Update for mine after 4 months couldn't hurt either:

on a side note, for those who are unaware, topsters.net is down due to the fact that the people running the site couldn't keep the maintenance up, if you want to create a chart like the ones posted in this thread neverendingchartrendering.org is the place to be my son, temptation is one thing that I've defeated 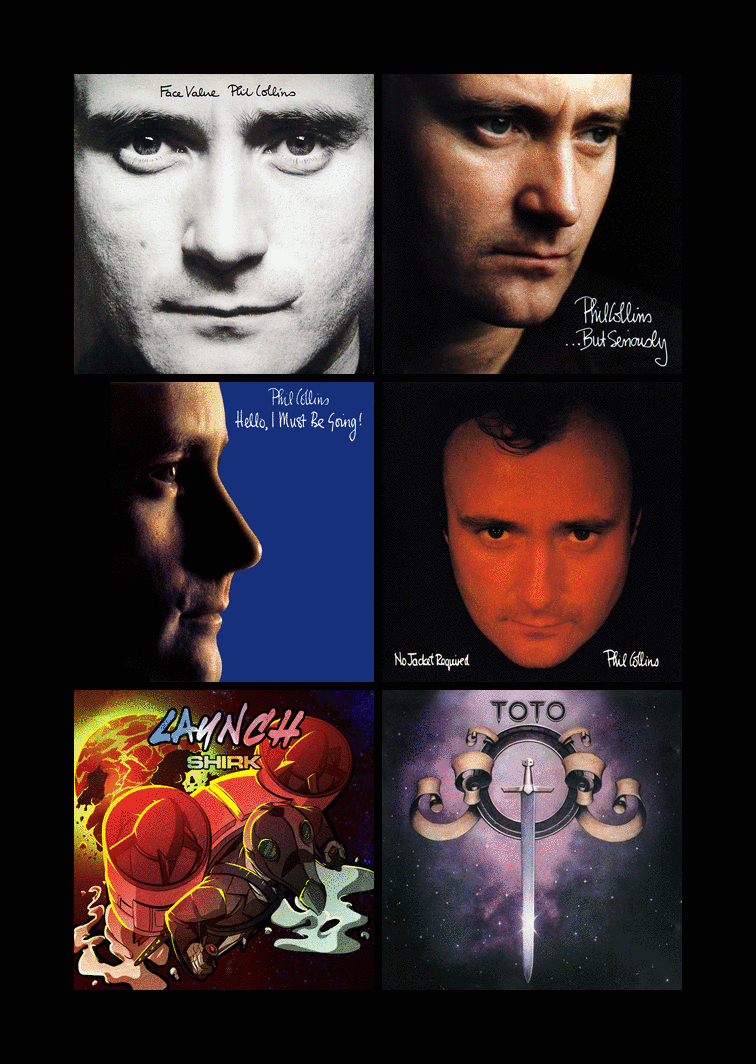 yeah, not much, but i don't know many albums 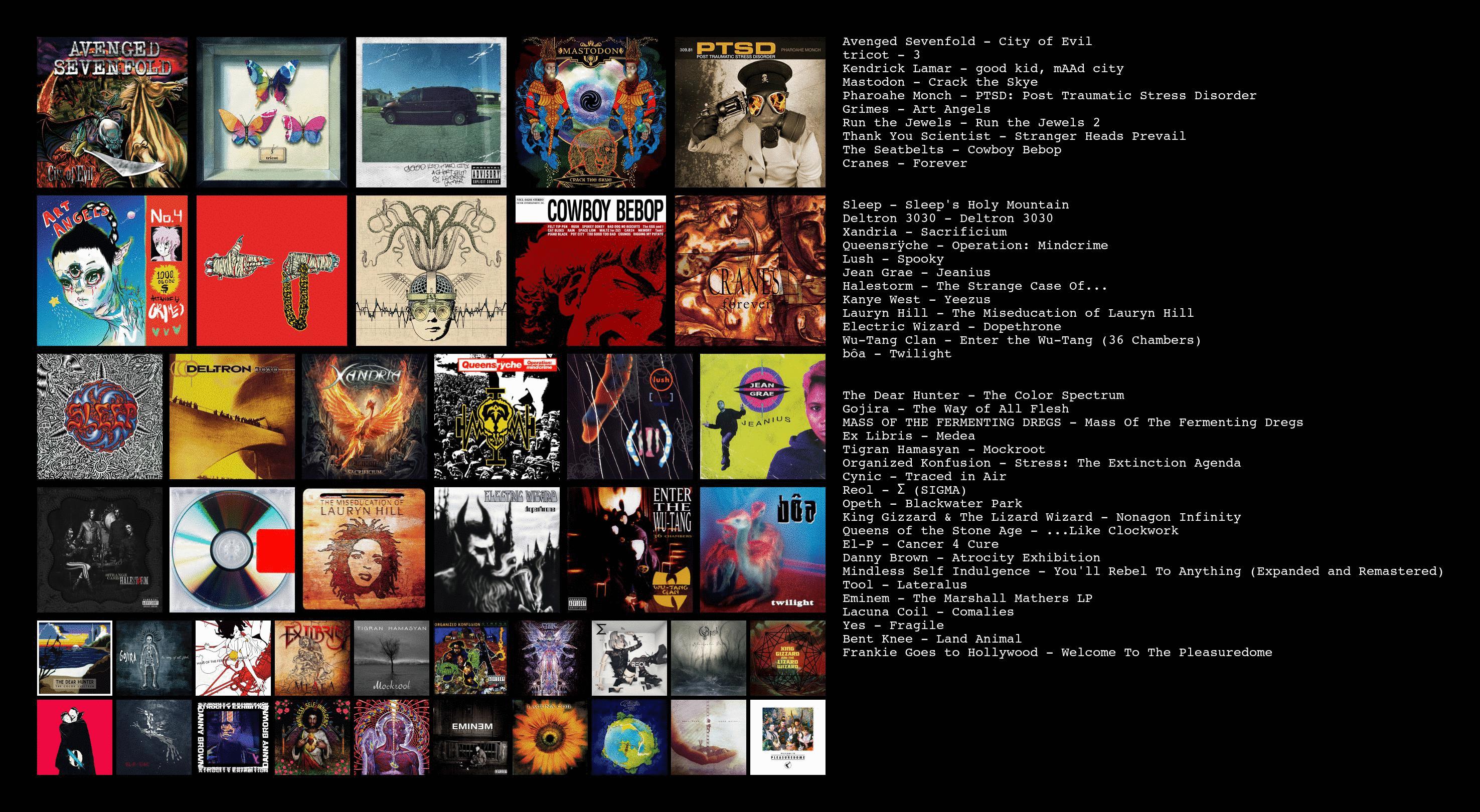 Good lord that was more difficult than I thought, I probably missed things but \o/. Enjoy my extremely broad music taste.

The OP link is dead, but I've found an working one(not exactly the same though): https://www.neverendingchartrendering.org/ 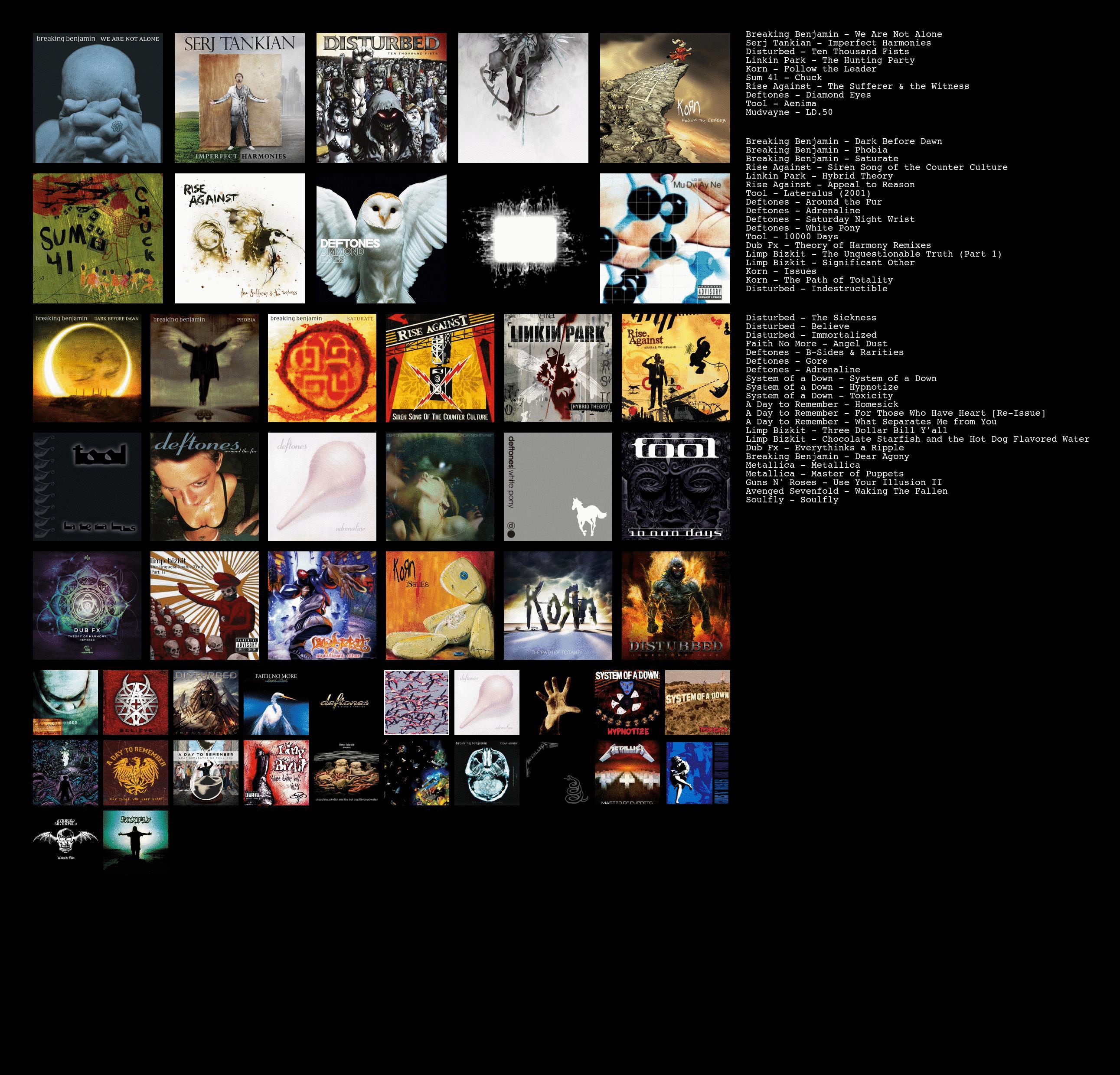 winter is black metal season + some of my favorite classics. I am very much the "listen to a handful of albums obsessively" type 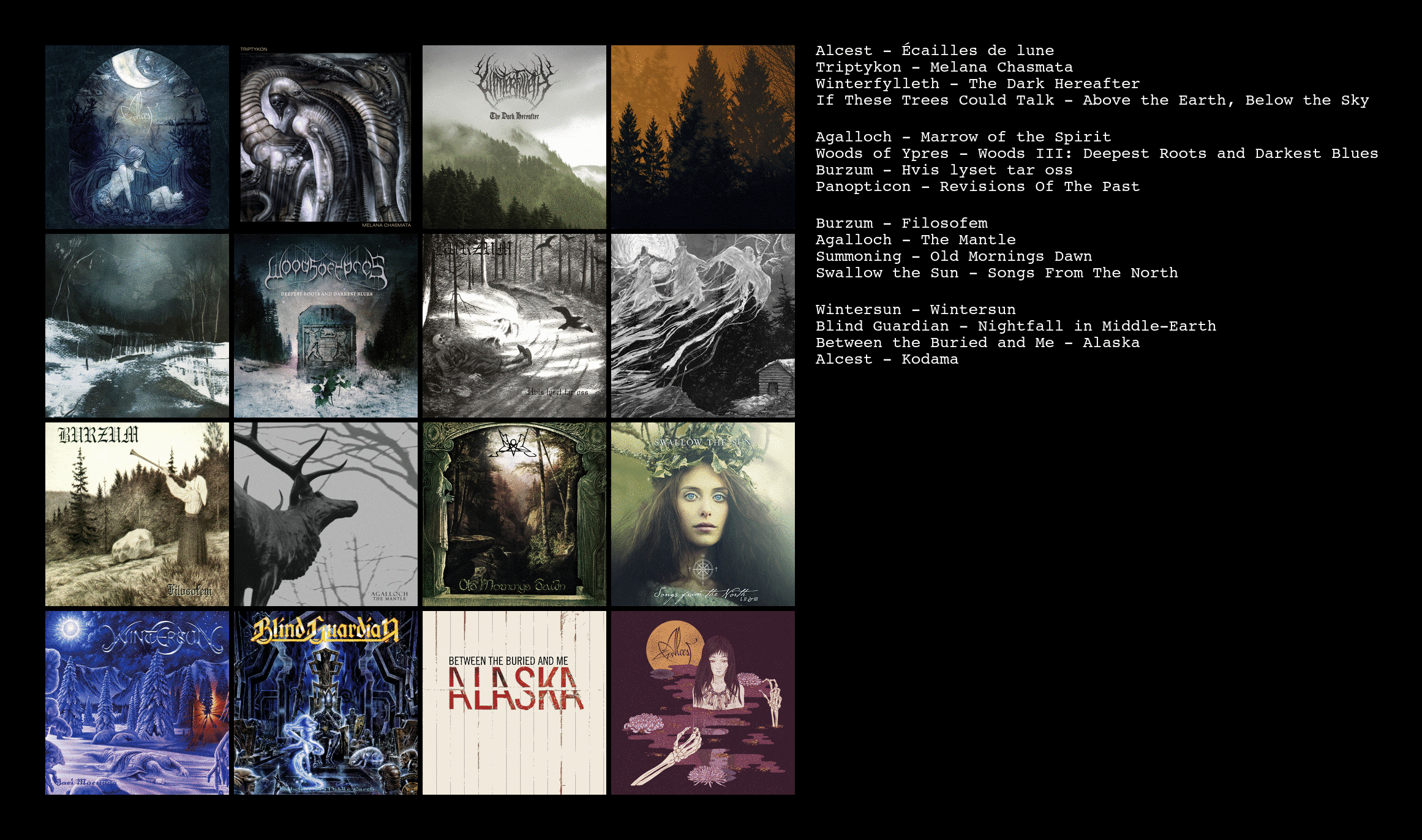 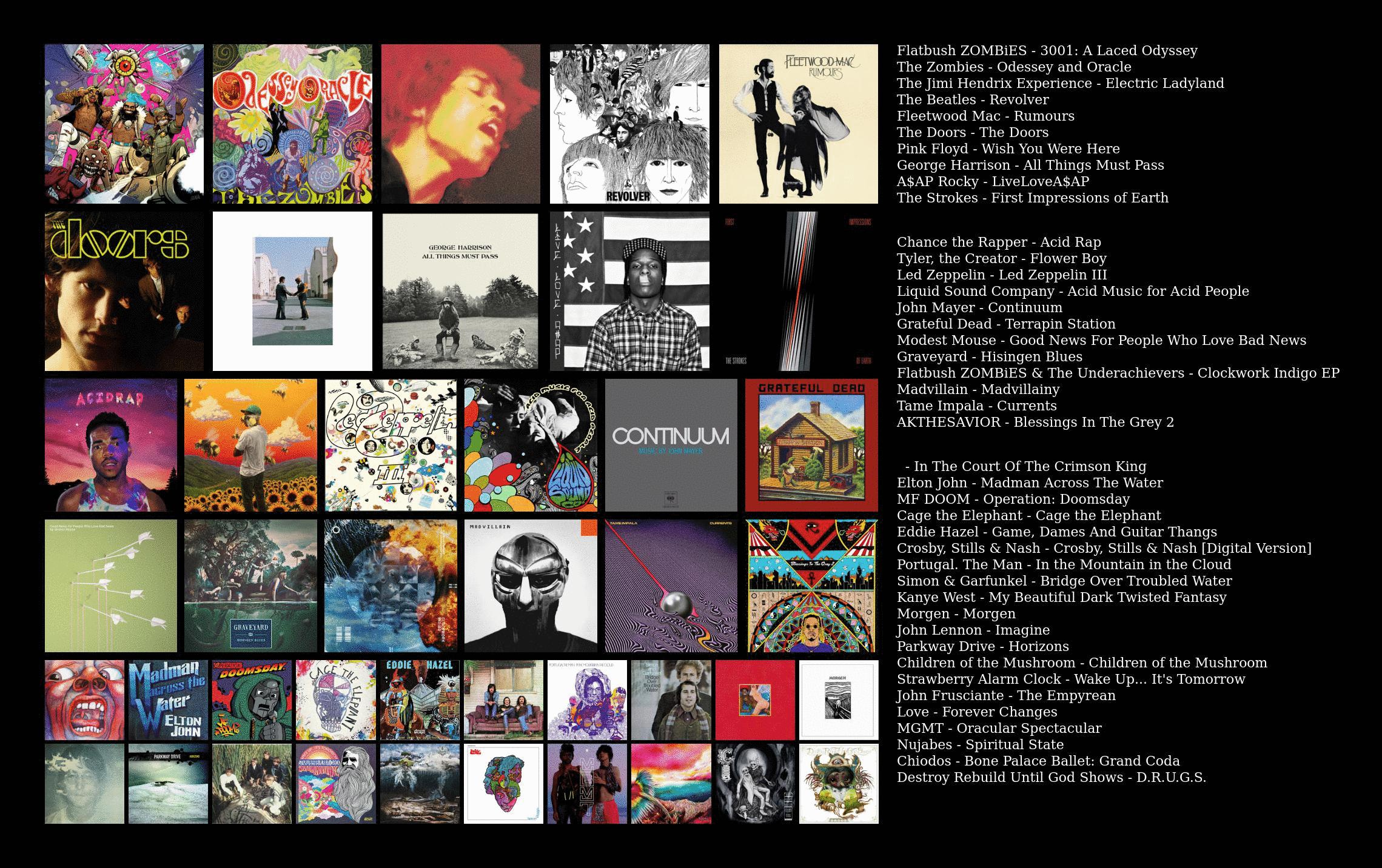 New year new list this time i tried to keep it so there werent repeat artists. some changes ive noticed between this list and the last is that ive gotten into psych rock/pop more, with bands like portugal. the man, liquid sound company, and graveyard being the new things im into. also abbey road is no longer my favorite beatles record bc honestly i find it has some filler songs that i dont particularly care for like sun king or because altho if i had repeats it easily would have been in my top 5 with the middle tier being tossups between rubber soul / white album / sgt peppers

i do these semi-frequently, but the last one i posted here is really out of date now! 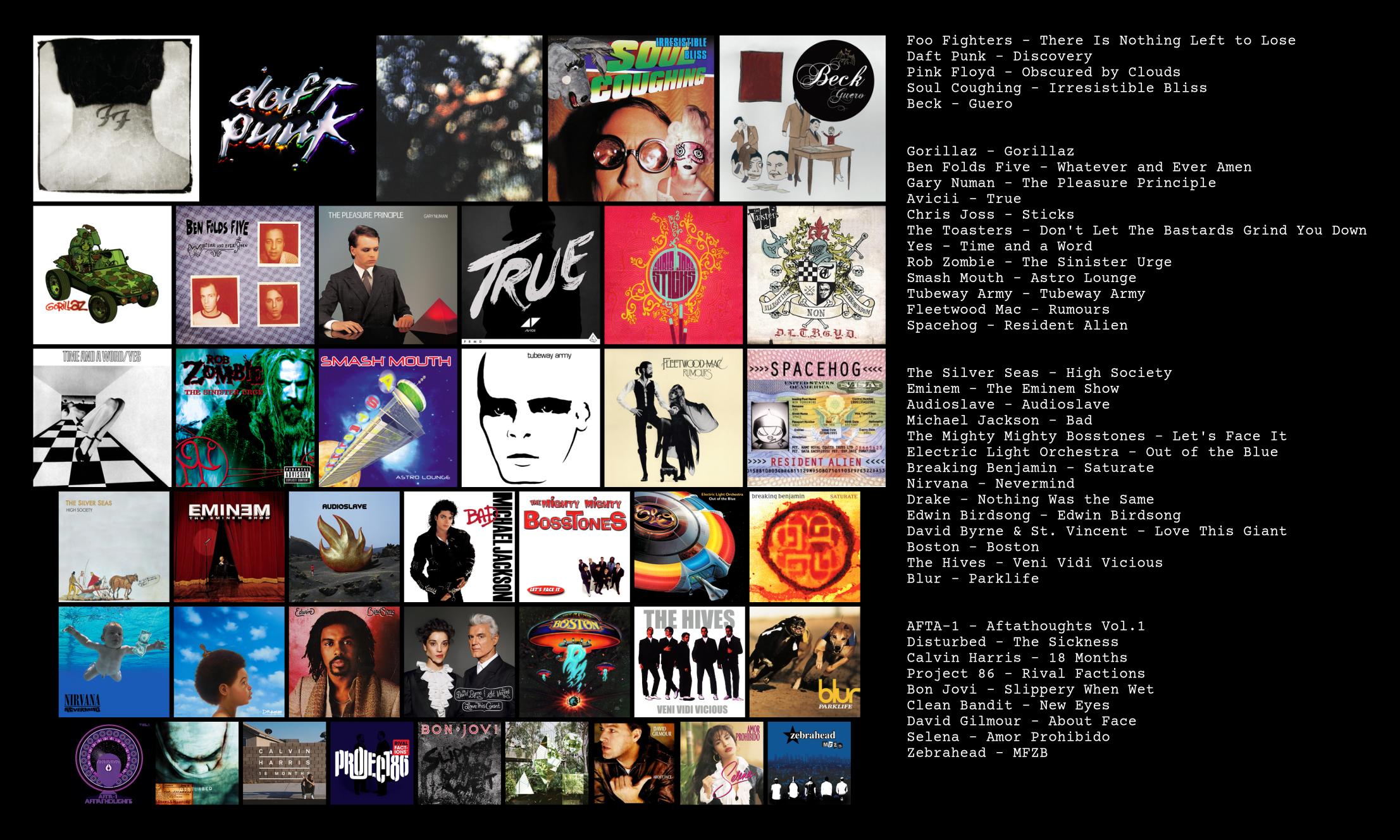 Decided to come back to this about a year later because I'm procrastinating on studying for an exam and honestly not much is even different lol, despite recent events and shit making some artists fall in and out of favor along with just trying to find new music and people to listen to. I always try to keep it to one album per artist per list, which made the bottom row really hard to figure out since those albums aren't albums I really go out of my way to listen to much, but rather specific songs on the albums I like more than the albums themselves. Top 5 are really my go-to albums and artists overall. Honestly I just felt like making this list again to prove to myself that I need to listen to more new shit lmao, so I'm always down to take recommendations and see what other people are listening to that I might like.

This is where I'm at right now 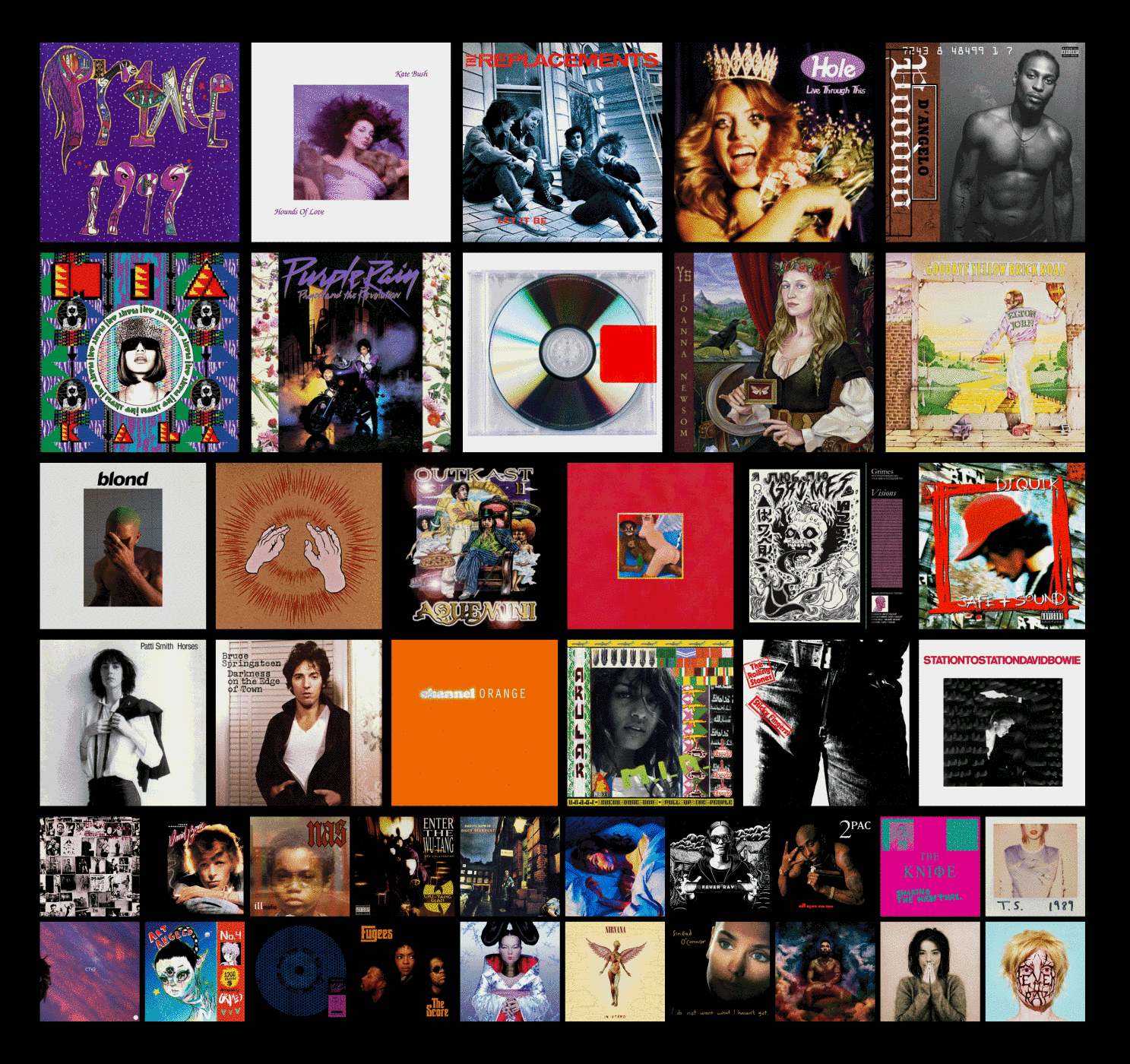 Could've sworn I've done one of these before... maybe in the last thread? idk anyways my taste hasn't evolved much but I've discovered new things here and there so here

Top 10 across the top as best as I could figure it out, second group are things I'm also really attached to (couple of these probably belong in the top 10 but idk didn't much thought into it lmao), group three are things I also like but only in a fringe way or like I enjoy half the songs way more than the other half, or they're albums I really loved five years ago but I haven't put them on in a while, or they're albums I only discovered recently and I'm still growing into them etc. etc. this shit is hard

That’s an easy one! 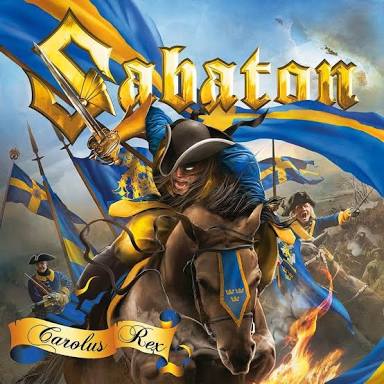 Not much variety other than that I’m afraid it’s literally all 80s metal
Last edited: Jul 10, 2018 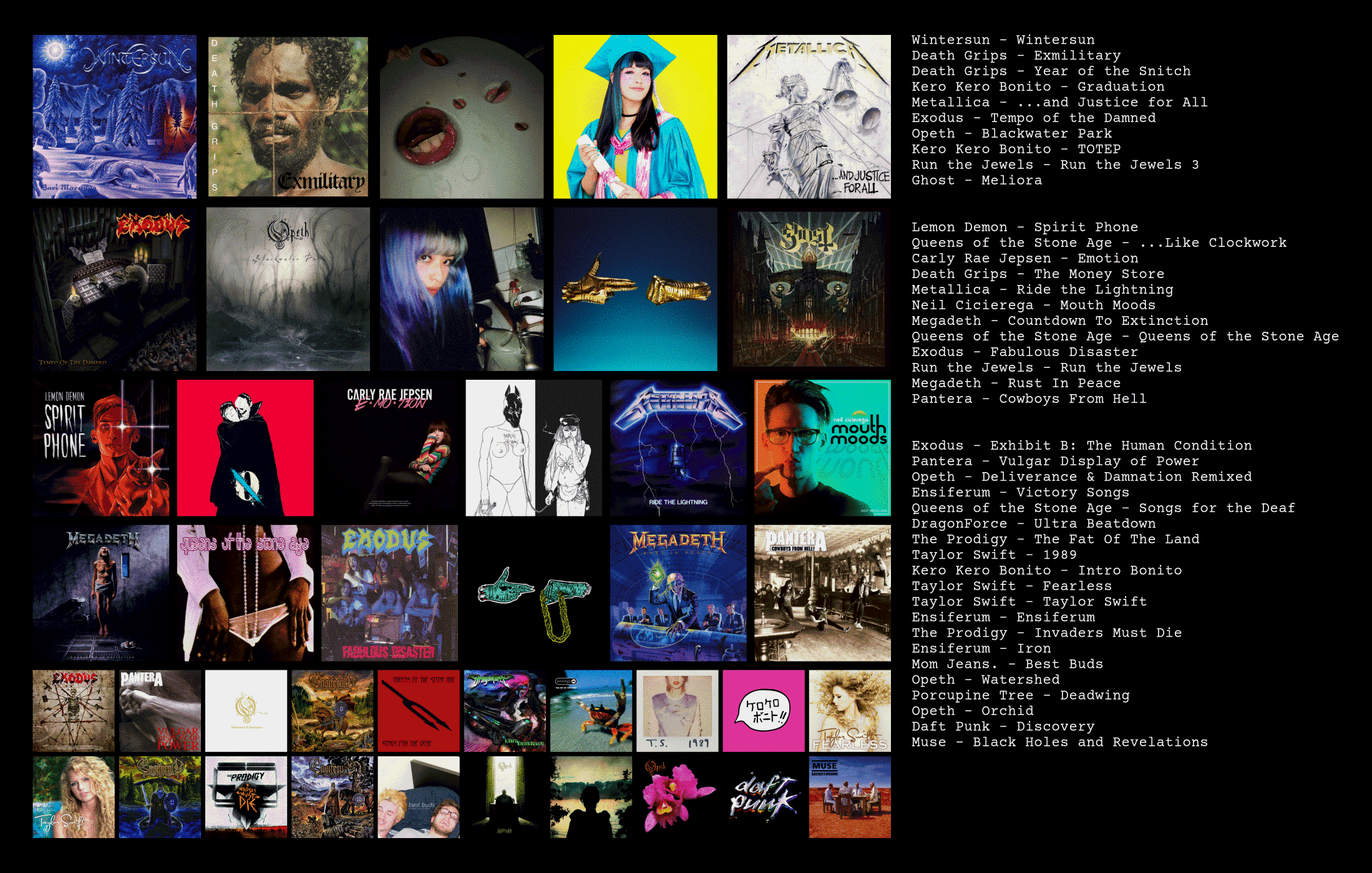