After the last round of Tribal Councils, EOTH, Xovier, Zman, Starshooter, and BasketCheese have walked the plank.


**F59: Treasure Island Hotel and Casino**
For your next challenge, you will be participating in what is one of the most iconic pirate pastimes, Gambling.​
At the beginning of this challenge, you each start out with $1000. Using our adorable bot Genre Bear, you can play Blackjack and Roulette.

Below are some of the commands that work for the bot. If one is not giving you a response, it is likely because it is disabled.
!blackjack
!roulette
!roulette-info
!balance
!leaderboard

Do NOT rob, or use any alternative method of gaining money. You can only gain money through gambling. You can only spend money gambling. Do NOT use slash commands, only use ! prefix commands.

You can only gamble **25** times per participating player. (This means only playing 25 times per player.) Each tribe will need to sit out people until the only have 6 participants.

After the last round of Tribal Councils, LeCehlou, Vertigo, Harry, Ry, and Nyurgh have walked the plank.


**F54: Swap**
Congratulations, you have survived through the first phase of the game!​
Your next challenge will be live and require you to send one tribe representative. We suggest sending a gambler.

Life on the Open Seas is hard. It's not the life you wanted, wasting away as a faceless, valueless crew member, no matter how prestigous the ship may be. You crave a life better than this. You deserve one. You just have to take it.

As it would be, knowledge of the treasure is currently concentrated on just 8 ships. Those who know on each ship are beginning to suspect each other and wonder about other ships. Why wouldn't they? Being untrustworthy is half of the job requirement

Will you work with your crewmates or will you stab them at the first glint of gold? It's up to you.

**F54: Liars Dice**
For your next challenge, you will be playing a game of deception.​
Two tribes are winning immunity tonight. Hope you chose your representative well!

You will play rounds of Liar’s Dice until only two players have dice left. Those players' tribes will win immunity. Each player starts with 3 dice that only they know the value (or face) of. Players take turns either: (1): betting on the number of dice of a particular value that are on that round or (2): challenging the previous bet. If it is impossible to create a new bet, the player must challenge. At the end of each round,that round’s loser will lose one die and a new round begins with new dice and turn order. If a player runs out of dice, they are out of the challenge.

After the last round of Tribal Councils, Kaif, OJ, Arby, and xdRudi have been keel hauled.


**F50: Make A Boat**
Welcome to PARROT.​
All tribes will attend PARROT, where the player with the least votes will be eliminated. If multiple people have the same number of votes, we will enter a tiebreaker procedure, and you can only vote for one of those players, who cannot vote. If no consensus can be reached, the entire tribe aside from the Immune player, will draw rocks.

After the last PARROT, exostomp, MysterySimmer, Carl-bot, ddlc, Cardinal, and Yata have been keel hauled.


**F44: Cloud Wars**
For your next challenge, you will be playing a Flash Game, but complicated and on a graph!​
It will be a live version of a game called Cloud Wars. Here’s a video of some very basic gameplay to keep in mind while you learn the instructions for this challenge:
Some terminology:
Unclaimed cloud refers to gray squares
Claimed cloud refers to squares of a tribe color
Travel clouds are lighter colored versions of squares of a tribe color and move so they can claim other clouds
Cloud Power is the number associated with a cloud. 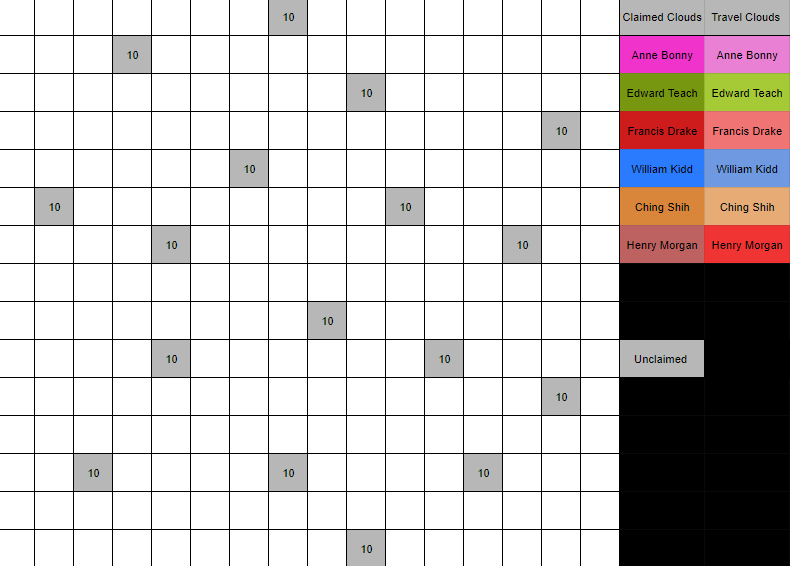 Once the board has been posted that turn, each tribe will have 5 minutes to discuss and to submit actions for that turn. The only action that can be made is Send Travel Cloud, but can be used however many times is possible. Sending a Travel Cloud is sending a smaller cloud that will move from a Claimed Cloud to any other Cloud. The Travel Cloud will feed on the sending Claimed Cloud, but must leave it with at least 1 power (so for example, if my Claimed Cloud has 10 power, I can send a Travel Cloud of any power from 9-1, but I can’t send one higher, because the Claimed Cloud doesn’t have enough power). All Travel Cloud movement will be resolved simultaneously.

If two Clouds owned by the same tribe occupy the same space, they will combine in power automatically.

Travel Clouds will only move 3 spaces per turn, and cannot move diagonally. They cannot change targets once sent.

Your tribe is out if it ever loses all of its Clouds (Travel Clouds do not count for this purpose, if you have a Travel Cloud but no normal Cloud, you are out).

The last 2 tribes standing (owning Clouds) will win immunity. At 10PM EST (approx 2 hours after starting it), or if we reach what is functionally a stalemate, then the two tribes that have the highest total Cloud Power will win.

After the last round of Tribal Councils, Totter, Saburo, daltz, and Ben have been keel hauled.


**F40: Swap**
Congratulations, you have survived through the second phase of the game!​
Finally, it is time. The old captains have been deposed, and you see a chance to make real progress on the hunt for the treasure that their power blinded them to.

With them out of the way, you meet up with the fellow treasure hunters, and agree that, for now, you can reorganize and lead your own ships. After all, it's not like ol Teach has much use for his at the bottom of the sea, does he?

And so the new era begins, one of prosperity for all. Or is it for you? Heh, why does it matter?

**F40: Shiplympics**
For your next challenge, you will be competing against other members of each tribe to see who has the best crew on the seas.​
You MUST pick a person and assign them to the task before you begin to schedule.

1 person will be assigned to each of the events. 1 tribemate will sit out. You cannot help one another once you pick your reps for each event. If you are playing in one of the Catan’s then you may swap with the other (for schedule purposes only).

#f40-arena will be opened for scheduling purposes ONLY. Anything else and you will be penalized.

Scoring 1st place for your tribe will be 1 point, scoring 2nd will be 2 points, and so on. The 2 tribes with the lowest point totals will win individual immunity. If there is a tie, it will be decided by 4p Chess.

All of these links are only suggestions. If you have another place you would rather play the game, then just ask, and it will probably be approved. Due to the scheduling element of this challenge, if an extension is requested, it will likely be approved, as long as there is clear intent to schedule.

Beeboy has decided to give up a life of piracy <3.

After the last Tribal Council, Crespo has been keel hauled.

This will be a 72 hour long cycle (challenge and immunity combined).

Bear with us as there is quite a lot of information here.

Phase 1 - Cards and Capitalism
At the start of this phase, all attending members of your tribe will be randomly assigned cards.

There are 4 different cards. There is only 1 Keymaster, 1 Sage, 1 Sacrifice, and all remaining players are Commoners.

Each person has 2 trades, which they can do at any time. You will be told what card you now have, and the person you traded with will be told what card they now have, and a public announcement will be made that a trade has been made as well as the time it was made, and no information will be revealed otherwise (unless the Keymaster card was involved, in which case the Sage will be updated on the identity of the Keymaster, or the Sage card, in which the new Sage will be informed of the Keymaster’s identity).

At the end of Phase 1, your cards will be locked in for the Main Game.

There will be two phases of voting in the main game!
Your cards have been locked in, and the Sage has once again been informed the identity of the Keymaster, and your voting machines are ready.

You will only be allowed to communicate in tribal chat. No exceptions.

You will now vote.

The first phase of votes essentially designates who is eligible to be voted out in the second phase and thus removed from their tribes.

If between Vizh Andy Foolish and Chad and Ryo : Vizh receives 3 votes and Andy receives 2— Vizh and Andy will be the only ones eligible to be voted in the second phase (which then determines who is eliminated from their tribe).

The question you may be asking is: if the first round of votes just sends you to a revote between those people, **WHATS** the point?

Well having 2 separate phases allows people to be more flexible with role claims and bluffs since they can’t be voted out as long as they don’t receive votes in phase one.

If you all aim for a unanimous vote that's fine but I encourage you to vote who you feel like in Phase 2 guilt free since only when they are voted in Phase 3 are there real stakes.

Remember, the Sage knows who the Keymaster is, and cannot explicitly lie about who they are.

Now you vote, and 2 people will be eliminated from each tribe, based on the rules above.

You can self vote and there will be no punishment.

Aaron has decided to give up a life of piracy <3.

After the last PARROT, Matt, ssr, Pickles, Drookez, Flare, Blakers, and SidTheShuckle have been conscripted into the Royal Navy.


**F30: Tanner Hums the Hits
For your next totally original challenge, you will be listening to, not quite songs exactly, but something.​
Tanner has hummed out 20 songs, and your tribe has to identify all of them. Submit your answers in tribe chat. The 2 tribes with the most correct guesses will win Tribal Immunity.

The tiebreaker will be based on an album art for your tribe.

With the overthrowing of some of the seas' most dangerous names, you didn't think it would go unnoticed did you? The Royal Navy has been targeting members of your crew for just this: a chance to slim down your crews, in hopes you will make a mistake. Your old crewmates may have been outcasted, but that doesn't mean they don't still seek the treasure. Nor does it mean they won't give up their chance at redemption without a fight.​

The Royal Navy is not a tribe. They are still in the game (but will not be counted in the vc at the top/challenge posts for the sake of continuity). Players can't dm them and vice versa. If a change occurs, it will be announced.
You must log in or register to reply here.
Share:
Reddit Pinterest Tumblr WhatsApp Email Link