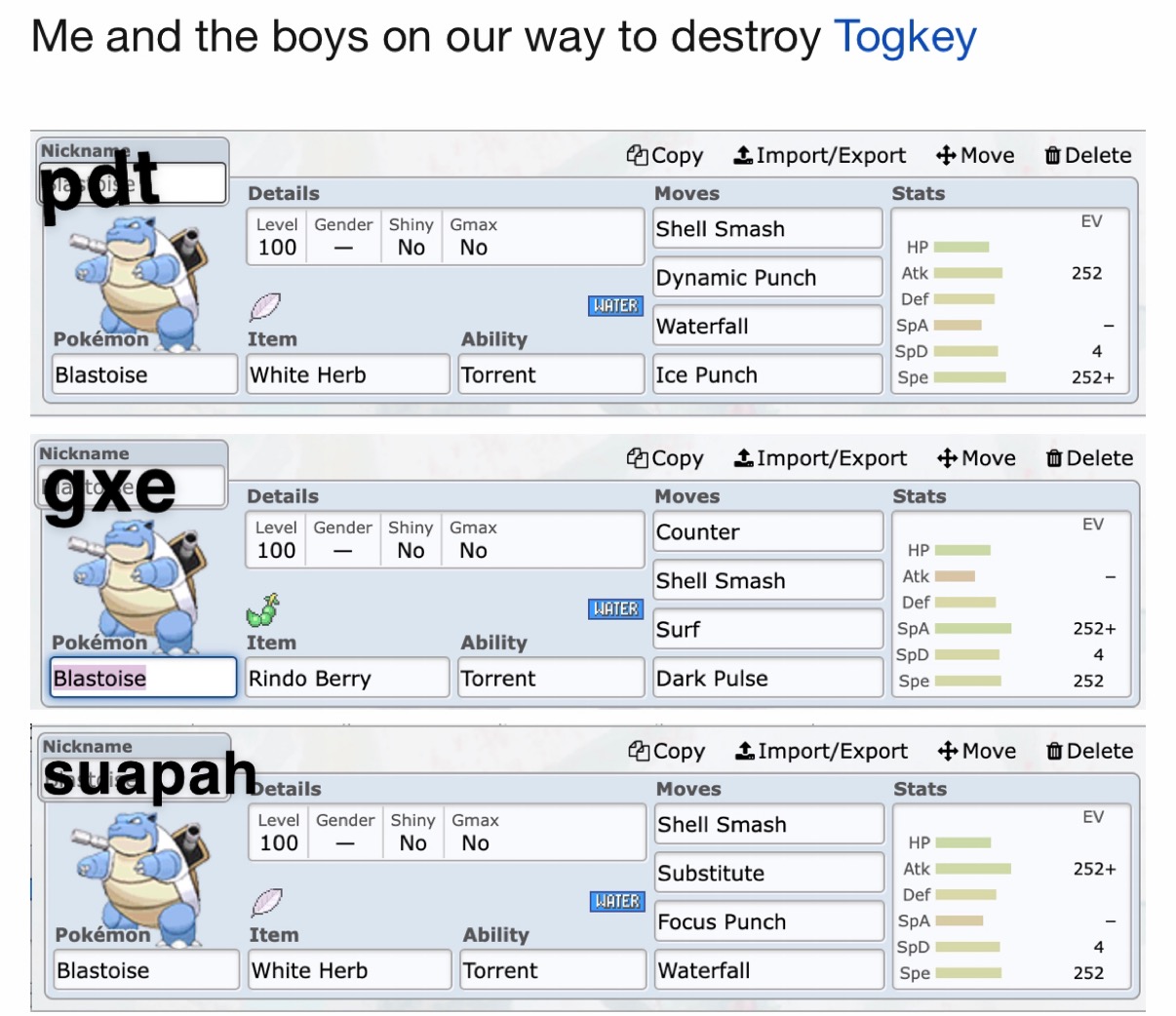 SS: GXE vs zS
HL game, I believe zS is better as a NU player but both are VERY creative in the builder. Can go either way.

SM: Luthier vs avarice
Luthier is a very good pilot and can beat anyone. Avarice will have to prep hard for a win here.

BW: Shuckleking87 vs Togkey
Barring a BW moment tog should take this.

DPP: vivalospride vs Beraldinho
Beraldo is the best DPPer but if vivalos rolls a good enough MU they could take it.

Thanks for the Dance

pdt has been balling, especially over the last few weeks with 3 straight wins against prominent players, including giving turt his only loss. Gum has also had a good tour, but I’ve been far more impressed by pdt’s play and opponents.

I’ll be honest, I have no clue how this game will go, but it’s definitely my highlight match from this week. Two very creative players in the builder who can pull out any tech at any time, and although I think this could go a bunch of different ways and GXE has been insane this tour (nice job btw), I’m going to bold my guy zS. Good luck pal.

mncmt has been doing pretty well so far this PL, going 4-2 with no signs of really slowing down. On the other side, suapah is definitely no slouch, but they also haven’t played a game of SS yet this tour. Should be a fun one for sure.

congrats! just wanted to use this time to shoutout PichuFlash for being an incredible partner in crime. I wanted to see you starting in this tournament but towards the end of the draft it wasn't shaking up that way so we took you on instead. you were invaluable in the adv duo and I look forward to watching you perform as a starter in the next edition if you want to. :)

thank you to the mushies for the season- it was the chill vibes on mushies last year that made me come back for more. big ups to to the team for showing up in playoffs and making it close.

zS we bought you for 18k and I'm glad we did because you literally carried us this season. The second half of this tour was unfortunate but we all have slumps, keep your head up king and you'll be chillin

mncmt PREP. nah but seriously though, I was kinda worried you would cancer on us but you balled the fuck out for us in SM and SS and you legit won us weeks. very fun teaming with you for this tour :)

gum mickey mouse ass schedule. I was convinced you were some annoying shithead that mence was convincing me to pick up, but you are actually a pretty cool person and a pretty solid player despite you playing some of the worst games in this tournament LMFAO. v glad you stepped into the ss3 role and racked up 5 wins for us :))

Spl4sh LITERALLY THE FUCKING GOAT. The .6k on auction day was intentional to strike fear. you were probably the unluckiest motherfucker of all time this tour but you pulled out some very clutch dubs.

Beraldinho ALSO THE FUCKING GOAT. you carried us hella hard and went 8-2?!?!?! literally the best dpper by far.

Raichy similar boat to avarice but you also clutched out some big wins for us throughout this tour. ik your record doesn't necessarily show it but your knowledge of ADV is unmatched. absolute gem of the draft.

cb aaron judge I apologize for not getting you more playing time throughout the tour, but your BW prep with Togkey was so fucking clutch week in and week out. You're a solid player who should get more opportunities v soon

Test Techles kinda the same boat as cbaj, but your SS support in the first like 4 weeks and during poffs was super helpful and I'm glad you were available to step in if need be in tiers you weren't familiar with.

Togkey last but not least, this smelly ass goon. Thank you for co-managing with me in my first time as the main manager, providing scouts and being an awesome presence in our cord. Probably the best BW NUer currently, and truly the only way to stop you is hax. The semifinals TB was prob the most hype moment of the tour. I hope you continue to play in tours and dominate in every tier. love you broski <3

Congrats Plooms! It was a hard-fought finals. Thank you to the $Musharnas for being such a great, supportive team and giving me the opportunity to compete. Big shoutout to Jisoo; our cooperation with scouting, building, and testing was the best in the business. Our builds were consistently on point. I'm looking forward to future tours.
Last edited: Jul 17, 2022

just gonna try do the same order as Aawin

Firstly thank you Finchinator for hosting a relatively smooth tournament and putting up with me and my dumb questions as a newbie.

zS Your creativity in the builder is unmatched and your ability to pilot it makes it scary af. Think we got burnt out towards the end but we definitely could not have won without you first and foremost.

mncmt The way I can just give you whatever team and you can win with it is crazy. Hoping to team with you again in the future for sure.

gum Why did ppl keep trying to beat you in the Vapo Balance mirror like ur not the goat in that MU. Ty for slaying out.

avarice Doing well in probably the hardest / most stacked gen alone is a huge feat and you also helped out where you could in other gens. GOAT

Spl4sh Didn't know you could save bad luck for a super laser beam of concentrated crits for Finals but very dope strategy. Thanks for the heart attacks and custom avi >:)

Beraldinho Was fun just giving you a concept and watching you run away with it, literally the MVP of the entire tournament, I gotta finish HXH soon :o

cb aaron judge Literally the best support I could have asked for. The knowledge and team diversity you gave me to help me make the best teams possible each week is a huge reason why we won at all. Despite your busy schedule towards the end of the season, we wouldn't have won without you.

Raichy GOAT behavior u just did ur shit and won. Clutched so many weeks for us too.

Test Techles Why is this ur smogon name LOL. We oversaturated our SS slots but you still gave us some wins and a ton of support in terms of identifying weaknesses in opposing scouts.

Aawin We got our redemption from NUSD :D best managers of all time ???

Grats on the win plooms, lesson be learned to the other teams that the team w the coolest name always wins

Wanted to shoutout all my teammates, we really had a ton of cool people I was glad to get to know better

Special shout to Expulso and Luck O' the Irish for the draft and pdt for being the other primary ss builder on the team (god knows I could never pilot anything expulso passes) I know you were upset w your loss but you still had an insane szn (for like 6k??) Lookin forward to more in the future

big shouts to quziel and etern for helping me test/bounce ideas off all season, 'preciate the fuck out of you two and I'm certain I would have rolled up with some dogass teams w/o your support

pdt suapah GXE vivalospride Raptor wish I played SS/DP more seriously at times so I could have interacted with you guys more. Genuinely cool to see the work you all did this season.

Confide you’re a cold blooded killer no matter what they say, always a pleasure working with you.

Luthier Evan. was right you are fun to team with, appreciate your overall demeanor and level headedness when discussing games post mortem

Jisoo the absolute queen of adv nu. Genuinely appreciated the insightful discussions between you and Pichu Flash this season. I feel like I learned a lot about ADV NU and its good to know some ppl still know how to think about the game.

PichuFlash thanks for the help with finals team and your general willingness to do anything and everything you could to help the team. Was cool to see you get some games in when you easily could have been a starter in your own right on a different team.

Shuckleking87 was fun getting team with you and talk bw every now and then, I can always appreciate a guy who considers my hair-brained schemes.

Luck O' the Irish Thanks for drafting me and building ORAS, it was a lot of fun and reminded me of the good ol’ days. You're a pleasure to work with and your ability to remain objective and offer actionable feedback and constructive criticism even when ideas sound too, lets say "creative" is something I wish more players had.

Expulso Thanks for drafting me, I am good for a break even record anytime and don’t you forget it! I enjoyed watching you work as a manager, you had several unique players/situations this season and you handled things impeccably. Wish we could have won it all, but theres always next year ;)