I wasn't very surprised that people still play this game
I didn't want to continue my mid-game playthrough while making this thread, so to kick off new grandma sweatshops what should the bakery name be? 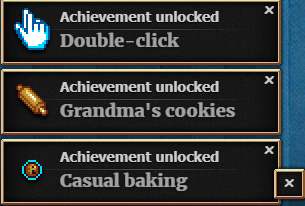 
no audience participation in such a fast-paced game is kinda dumb IMO. this is some adrenaline-pumping action

After the first frenzy, a few buildings have been bought

what the GODDAMN FUCK

the golden cookie i understand. it's an rng-based event, only beneficial for us. it only harms the integrity of the run slightly, and the drawback of passing it up outweighs the harm it does.

but BUYING A FUCKING GRANDMA UNSOLICITIED?!?!?!!?! that is an ACTIVE CHOICE that could have been made at ANY POINT. is this SMOGOFF plays cookie fucking clicker, or ARROGANT ASSHOLE takes ADVICE on HOW TO PLAY a game that IS NOT ENTIRELY IN THE CONTROL OF THE PUBLIC?!?!?!?!?!??!?! IT'S NOT SMOGOFF PLAYS AT THAT POINT, user t045t3r (if that even is your real name). it's YOU PLAY. we watch, we advise, but YOU. FUCKING. PLAY.

there's no respect for the medium! whateve3r happened to the landmark of the forebears, the public birth of crowd control gaming (TPP (Twitch Plays Pokemon))? It existed before this momentous event, but it never weighed as heavily in public consciousness. Hell, you could argue that event catapulted Twitch into the public eye! But that's immaterial. The point is: audience participation is vital. To intervene, without a care for the people who SUPPOSEDLY form the backbone of this endeavor, and deny them their own opportunities, accomplishments, acquisitions, achievements, their OBJECTIVES? To cast aside the beauty of the chaos of everyone saying something different, but it all ultimately leading towards the end objective? It's sickening. It's sickening and I am nauseated at this absolute garbage.

I am boycotting this thread from here on out. I've said my piece, and anyone with half a thought can reason it out themselves. I highly suggest the moderators lock this thread, and prevent this user from making any further ones for a while - no moral compunction.

You make me sick, OP. Die and burn in hell.

So I forgot to close the game because having too many google tabs open aren't great for my computer, but idling and mass producing cookies will be very worth it later

We're far away from getting sugar lumps but maybe we can just buy all of these upgrades for more Cps. Are getting the hidden shadow achievements worth it without access to milk upgrades?

i eat the fish

i view cookie's profile and leave a message.

TailGlowVM said:
Also name yourself Orteil I won't mind if you go back later
Click to expand...

i legally change back the bakery name