(Thanks to MiniArchitect for the logo!)
​
After almost 3 months of fierce competition, we're at the pinnacle that every old gen player aspires to reach, the playoffs for the coveted white trophy

Before we get to the playoffs let's all thank the people that donated their time and effort so this tournament could happen, FriendOfMrGolem120, Perry, tjdaas, Jimmy Turtwig, and even Finchinator. Double shoutouts to perry for handling the point sheet super efficiently on top of hosting.

Each series will be a BO5 of the Cup metagames with the higher seed picking which tier is played first. The remaining games will use the standard "loser picks next" deciding order.

Ok guys, gl for all.

Holy crap this bracket...
This is going to be hard to predict, all players here have been fantastic.

Obviously every qualified player has proven he is great, but having Ojama, Lavos, BKC, ABR, McMeghan, tamahome and SoulWind in the same bracket really sounds amazing. Those playoffs will sure be something to watch with all those Pokéstars fighting.

also, McMeghan to win it all

and good luck Zokuru and Bihi, you are not the most proven players of the field but I'm pretty sure you can do some good perf so go all out and bring some nice wins home

rooting for the defender of planet earth elodin

grats Alexander. on making it to playoffs, gl next year

Upon popular demand...WELCOME BACK TO THE UNBIASED PREDICTIONS

As a former Smogon Classic winner, I believe I can bring some insight to the table lol.

1. Lavos VS. 16. FlamingVictini | FV is a pretty solid player, but the tier he is most known for, ORAS OU, is not in this tournament. Neither is SM OU, where he would have the advantage against his opponent. Instead, he finds himself in the precarious position of facing off against Smogon Classic champion Lavos Spawn in five tiers that Lavos should have the edge in. I find it very hard to believe that Lavos will lose in Round 1. FV is easily good enough to win a game or two, but that's about it.

2. Ojama VS. 15. BIHI | bro BIHI LOL what year are we in? I remember this man from like 2013. He's obviously a heavy underdog against former Classic champion Ojama, who has a big advantage in all of the tiers (except RBY, I guess). This should be a lopsided affair.

3. Tamahome VS. 14. Zokuru | This should be another easy win. Zokuru might be like decent I guess idk lol. Tama is on another level, though. He made his name on the site in ADV OU and transitioned into becoming arguably the premier DPP OU player on Smogon in the past few years. He should easily smash Zokuru.

4. Pohjis VS. 13. elodin | You already know vros...RIBBON SYNDROME IS BACK! Some individuals would fangasm at Pohjis's ribbons and declare him to be an expert of the old gens. However, I think this is a far cry from the truth. Pohjis is probably slightly above average and is roughly a 9k player in SPL. I think elodin is somewhat close to him in talent level, but I do favor elodin in this matchup. I think he should be able to win BW and ADV, and then finesse a win in one of the variance madhouse tiers.

5. McMeghan VS. 14. Kingler12345 | .....WOW LOL this might be the most lopsided matchup we have. The loaf is probably a bit below average, whereas Roro is a pretty solid player in all of these tiers. He's obviously heavily favored and I would be shocked if Kingler won a non-RBY game

6. SoulWind VS. 13. Alexander. | This is a pretty close matchup. I could easily look like a dumbass predicting against SoulWind, but I think this is a reasonable take. Prinz should be favored in ADV and RBY, while SoulWind is favored in BW. DPP and GSC are tossups to me. While I would favor Alexander in more tiers, having RBY one of those advantages dilutes his win expectancy a bit, especially since SoulWind is a slightly better player. Nevertheless, I'll pick the upset I suppose in what should be a very close series.

7. BKC VS. 12. ABR | This is a very interesting series. BKC is probably the best old gen player ever, and arguably the best player ever (although, I would give that honor to peak Tesung). We all know how good ABR has been as well. If this series was a bo7 with SM OU and ORAS OU, I would predict him to win. However, it's just too hard to predict anyone to beat BKC in the old gens. I think I put it best a few days ago: 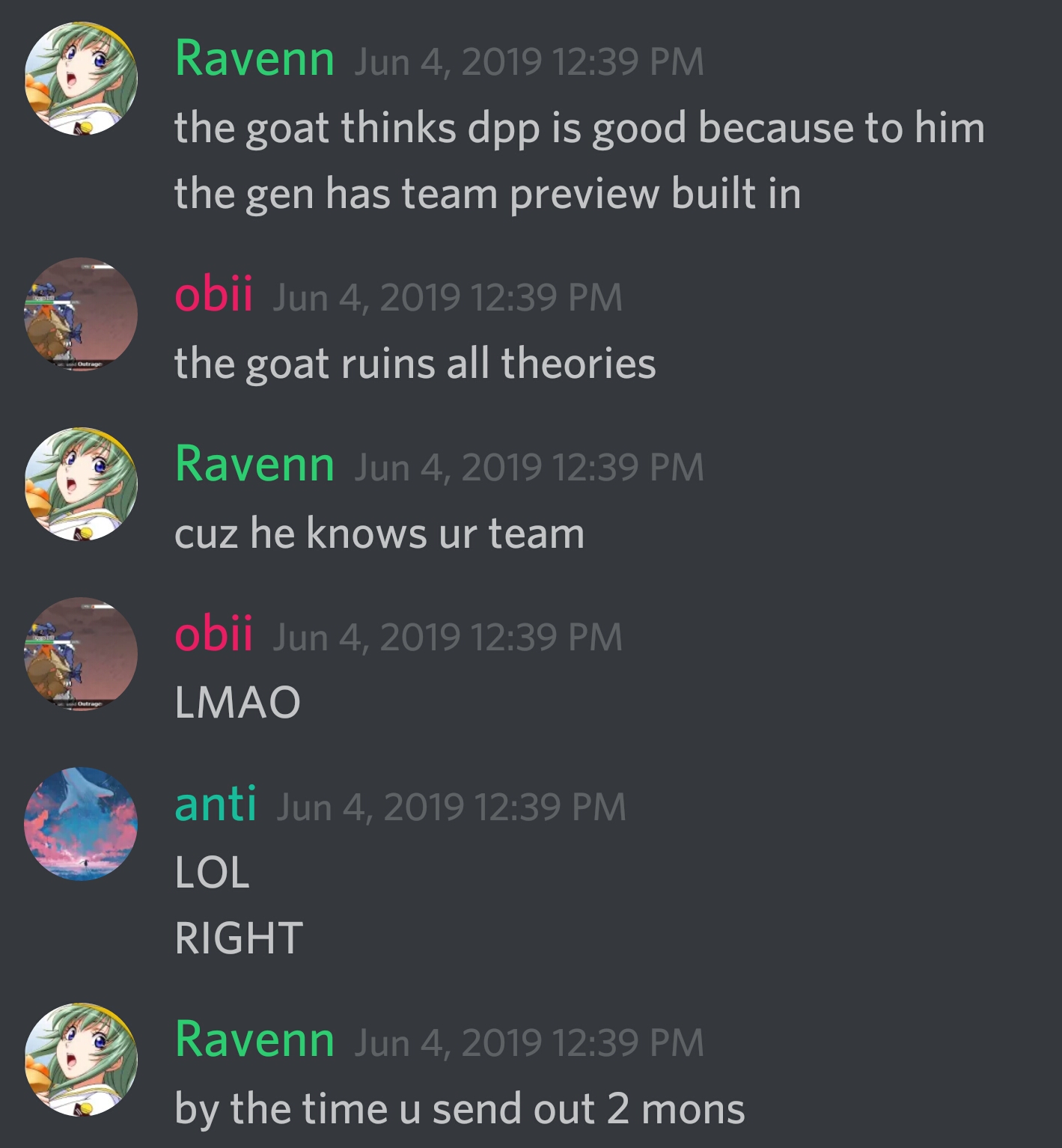 How is anyone beating him?

These player mini-profile things are pretty sick, maybe something else than individual cup W/L should be used though? idk, could be spiced up imo

Looking forward to watching a lot of these games, I'm playing roro next weekend

Good job so far Prinz! Time to go back to matching fake accounts on Tinder bro

Zokuru Let's go, I know you can kill more than 3 Pokemon in one bo this time.

Rooting for BIHI and BKC

1. Lavos (RBY, GSC, ADV, BW) VS. 16. FlamingVictini (DPP) - Lavos is arguably the most dominant player in the world right now and I wouldn't be surprised if he 3-0d here, but I'll give FV a slight edge in DPP because he's brought a few cool teams and I think he could run up with something interesting and take a game off of Lavos there. Otherwise, Lavos tableflips FV in every other gen so there's not much point in discussing those.

2. Ojama (literally everything) VS. 15. BIHI - skipping because there's literally no point in talking about this one

3. Tamahome (RBY, ADV, DPP) VS. 14. Zokuru (GSC, BW) - Zokuru apparently plays GSC a lot so I'll give him that and I feel like he's gonna bring some dumb cheese in BW, but Tama is obviously a way better player and should win this series pretty easily unless Zokuru pulls out some otherworldly cheese and haxes RBY.

4. Pohjis (GSC) VS. 13. elodin (RBY, ADV, DPP, BW) - Don't get me wrong, Pohjis is a great player, I just think that elodin is doing incredibly well right now and it's tough to give Pohjis an edge in anything outside of GSC really, considering that elodin's doing well in all of the oldgens that he has experience in.

5. McMeghan (GSC, ADV, DPP, BW) VS. 12. Kingler12345 (RBY) - Not much to say, Roro's just one of the greatest of all time whereas kingler just isn't really proven in oldgens for the most part. I do favor kingler a bit in RBY because he has more reps playing it as of late and I feel like he's gonna freeze a Chansey at some point, but otherwise I don't see him doing particularly well against Roro.

6. SoulWind (GSC, BW) VS. 11. Alexander. (RBY, ADV, DPP) - Bit of an upset pick here, but I feel like Alex has the right kind of playstyle to match up well against SoulWind and take him down. Looking forward to the games in this series because I think it'll be a pretty close one that'll ultimately come down to DPP as the other tiers seem a bit more clear cut. This is honestly my highlight of the round seeing as both are pretty hungry to prove something following recent performances, Prinz with his r1 wcop disappointment and SoulWind with being the runner-up in yet another individual tour.

7. BKC (RBY, ADV, DPP, BW) VS. 10. ABR (GSC) - ABR's done fairly well whenever he's played GSC in tours and has shown an aptitude for it in general so I'll give this to him against BKC who feels like he's "slumped" in GSC lately a little bit, as he probably should've 1-2'd in Round 1 of wcop, but he's obviously still great and could win it. Otherwise, BKC has years of experience on ABR, who doesn't really have anything resembling significant results in any other oldgen besides BW stour points I guess so I'm easily taking him in all of those.

8. Malekith (RBY, BW) VS. 9. TonyFlygon (GSC, DPP, ADV) - Tony's honestly really impressed me in oldgens lately, GSC especially, and I think he'll be able to edge out Malekith here take take the other two midgens while Kith will have some phenomenal support in BW OU and is still a respectable player in his own right.