Hello and welcome to my new metagame Type Chart Swap.

Here is the new type chart, thanks to The Eevee Gerneral; 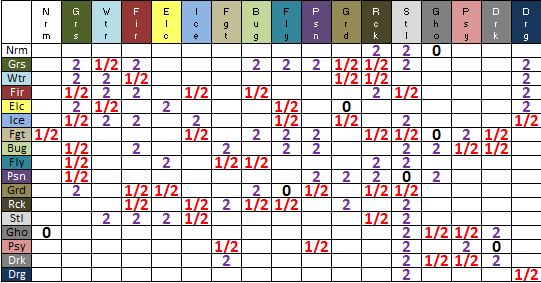 Thank you for reading and i hope you luvdisc!

Looking over the rules, Dragon-types look extremely threatening in this meta, as they now have completely unresisted STAB (Steel is weak to Dragon ;-;). I guess it's weaknesses and lack of resists make up for it (weak to Fire, Water, Grass, and Electric; resists only Ice)

Sun is also looking very threatening, as Fire is no longer weak to Rock, and Venusaur is suddenly a monster in most regards (Plus, Sun nullifies it's new weakness to Water). Special award to Volcarona, who has good coverage with her typing, no longer crippled by SR, and decent enough defensive typing (Quad weak to Grass).

Overall though, this looks fun, and would be neat if you could get a server to host this.

Oooh, nice idea.
Ice would be overpowered, with no weakness >.>

At first i thought that everything would be vice versa another way. Like Water now hits Electric SE is what i had in mind. But this is actually better. There will be alot of instances where people just Tbolt your Gyarados which now 4x resists Electric out of sheer nature.

I just realised how overpowered an unresisted kyurem-black stab outrage would be. So now Dragon will resist dragon. I also message Joim, he is happy to host it but he cannot do it until a couple of days.

anty208 said:
I just realised how overpowered an unresisted kyurem-black stab outrage would be. So now Dragon will resist dragon. I also message Joim, he is happy to host it but he cannot do it until a couple of days.
Click to expand...

I would just start making a ban/uber list instead of changing your mechanics just for 1 pokemon.

Ehrmantraut said:
I would just start making a ban/uber list instead of changing your mechanics just for 1 pokemon.
Click to expand...

It isn't just for one poke, it is for all dragon types, like DD dragonite or dd Salamance or Latias Draco. Kutrem-b was just a very scary example.

so now... gen I psychic syndrome, running your own dragons to beat other dragons. This'll be fun.

At least they're weak to grass/elec/fire/water now

So a current threat that I see in the metagame is Togekiss and Staraptor. This is because the Normal / Flying coverage is completely unresisted bar Shedinja (whom for once in it's life actually resists coverage instead of "resisting" it by being hit neutrally; gets wrecked by U-Turn). Togekiss sports a good base 120 Special Attack, and sports Air Slash and Tri Attack while having good bulk, and a neat movepool, including Nasty Plot. Meanwhile, Staraptor has good speed and attack. Reckless Double-Edge and Brave Bird will do massive damage to anything, while Intimidate is still a good ability. Another bird that could potentially be strong is Swellow, since it has a base 125 speed and Guts to boost it's OK 85 attack. Braviary can set up with Bulk Up and has good bulk like Togekiss, although not as much.

Defensively, Normal / Flying is an OK typing, sporting 2 immunities (ground and ghost), 2 weaknesses (bug and grass), and 3 resists (ice, electric, and rock). However, it should be noted that Bug and Grass might end up becoming common types, while the latter 3 probably won't, so it's probably not the best defensive typing.

For as far as I can see you did. Thank you very much for doing it is really helpful, do you mind if I put this on thread starter?

For as far as I can see you did. Thank you very much for doing it is really helpful, do you mind if I put this on thread starter?
Click to expand...

You are welcome! Go ahead!

Hell, with this hail teams might be broken LOL(get the pun on hail?)
Ice seems an amazing defensive type, I'm beginning to think Jynx might be a little hard to stop(with so many resists and no weaknesses)

So far ice types seem quite broken. I am thinking about giving them a weakness, Manet water (which isn't very good in this meta.

What do you guys think?

In the new Type Chart, Normal should now be Super Effective against Rock and Steel, not resisted by them like it currently shows.

I don't think we should start adding new weaknesses in just yet. Let's wait till we can test things out for ourselves.

Edit: Holy Balls! Just noticed that Bug hits 6 Types Super Effectively, and is resisted by only 3.

I say, just keep it to your original idea, of turning everything, you can make a new type chart by yourself, but that is not where this is about

So it might be broken now, then ban the most powerful and see glalie in OU :)

Moderator
I'm with JamesSonOfBaboonzo and Snaquaza here. The type swap is a really cool concept, but the exceptions (with the exception of the immunities) sort of take away from the idea. Even the "types are the same on themselves" is pushing it a bit.

Just have all type effectiveness swapped, except normal. Then let the metagame sort itself out.

nyph said:
Just have all type effectiveness swapped, except normal. Then let the metagame sort itself out.
Click to expand...

What u got against Normal? :(

Protip, bulky Volcarona can destroy the tier if Scizor does not come in at the correct time for bullet punch. even then, you have a chance to burn the bastard!

LOL, Lucario takes 50% from SR now :)
On another note, anybody notice how broken Abomasnow is ???

JamesSonofBaboonzo said:
What u got against Normal? :(
Click to expand...

Yeah you guys are right about the ice thing (sounds like abamasnow and kuyrem will go to burrs, but not yet). Normal isn't super effective on anything because gamefreak wanted it to be the plain worst type. I am thinking about switching the types on themselves but if you look at the chart things are a good as they are but I am thinking about it.