No sense in waiting to post this until after the suspect test is over, right?

When you meet the ladder reqs, post a screenshot with your username and COIL Ranking to confirm you did it. The username located in the top right corner of the PS! window MUST be in the screenshot for it to be counted.

HugenDugen said:
Following the precedent set by the Moody and OHKO Clauses, the Swagger ban will be extended to Ubers, removing an almost entirely luck-based and destructive part of the metagame. However I'd like to reiterate what I said in the first post. This will NOT be used as a precedent to balance the metagame by removing aspects that are considered "too strong".
Click to expand...

Grr. Let it be known I get reqs first >:3 (I c/p'd everything from other thread) Let me tell you - I was dedicated to this suspect test for two reasons. 1) I had a shitton of free time today, with nothing better to spend it on, and 2) I'm extraordinarily FOR banning Gengarite from Ubers. This is for another three reasons entirely -

A) The massive overcentralization of the meta with little-to-no checks outside of pursuit trappers (which, depending on its moveset, it can get around), resulting in it almost always nabbing a kill or two
B) The diminishment of Stall as a viable team archetype
and C) while I'm not particularly fussy about Mega-Gengar in itself, I NEED Shadow Tag out of Ubers.

For Point A, a lot of the counters to that have been the existence of Xerneas. Xerneas is currently the hands-down king of Ubers. A sought-after typing, highest usage stats since its release, and it forces every team to have at least 1 extraordinarily powerful check to it, and depending on its moveset and EV spread, it can potentially get around all of them. Heatran? Focus Blast. Scizor? Defense EVs and HP Fire. Ho-Oh? Stealth Rock and Psyshock OR Kyogre and Thunder. HOWEVER! Xerneas sure as hell isn't getting a ban, because it can only run 4 moves, and as such, that's allowed the meta and its players to adapt to it! Every team will have a way to play around it, because we've adopted the mindset of the being necessary, and that's the key point - it's possible. It has no choice but to reveal its moveset (let's be honest, more often than not, you can tell what moves its running from the first moves it uses other than Geomancy and Moonblast), allowing it to be checked, albeit still being a dominating offensive threat. The difference therein between Xerneas and Gengar is that whilst they both "overcentralize" the meta, Gengar does not have a set check! Gengar can rip a massive hole in a team's core or a check to a potent threat on the Gengar user's team with little to no risk or consequence, as the other player will more often than not find themselves in a sticky situation, especially if not prepared in any way for it. The most common pursuit trappers in the tier, Tyranitar and Scizor, still guarantee at least one death on their team due to Gengar - Tyranitar, assuming prior damage, falls to Focus Blast, and Scizor downright loses to Destiny Bond, whatever way you twist it. Another "check" to Gengar in Aegislash still gets mown over:

Point B) Stall is an archetype I've come to love this generation, and as such, I feel I have a decent understanding of. Now, I'm not saying "ooooh gengar shud b bannd bcuz it beatz mai fav playstyle QQQQQQQQQQ", I feel it essentially dissipates the potential of something that is a relevant part of the metagame! HO is running wild and stir crazy on the ladder and even sometimes in tournament play this gen, and Stall is an extraordinarily good answer to that. Now, let's assume aforementioned HO team has a Gengar on it. This allows Gengar to nullify, dispel, eradicate and otherwise annihilate a member of the Stall team's core, thereby letting one of the HO's team extremely potent threats that would have been otherwise checked by that Mon rip through the team. I believe that the fact that Gengar-Mega exists greatly contributes to the prominence of "shitty, mindless, no-effort-required HO" everywhere, because of its massive, for lack of a better term "overpowered" impact and influence due to the declination of Stall's viability at the hands of Mega-Gengar. (Whew, that was one helluva run-on sentence.)

Think of it this way - I achieved reqs using ONE team. Can you guess what that team was?

Deoxys-Speed, Rayquaza, Yveltal, Xerneas, Magic Coat Ekiller, SD Mega-Scizor (which does a decent job of handling M-Gar, but quite possibly the only thing that does).

My team physicalized "shitty HO", and guess what? I was #1 for almost the entire duration of the time frame I was laddering in, and achieved requirements to vote in 9 hours by facerolling on my keyboard.

Point C) Shadow Tag. In SD Mega-Scizor and Magic Coat EKiller on an overwhelmingly offensive, mindless, shitty HO team, I was able to beat Mega-Gengar with better chances than most. But Shadow Tag in general... the other two (ab)users, Gothitelle and Wobbuffet, can rip shit to bits and pieces and make stall cry even more.

Gothitelle, as mentioned several, SEVERAL times already in this thread, has the potential to come in on either a weaker special attacker or staller, drive them to agonizing tears while stacking Calm Mind to +6, and Trick Room. Without a Dark Type or a shitton of priority, I'm not sure how you'd survive that. Even if it ISN'T a Calm Mind or Trick Room set, it will still be able to eliminate aforementioned mon with ease, performing similarly to Mega-Gengar in that it removes a threat from the opposing team, survives to potentially do it again, and paves the way for its own team to crush the other one.

Wobbuffet has two options - Encore something trying to set up on it and switch out into your own sweeper and say "GG", or come in on a sweeper already set up or scarfer, press either "Mirror Coat" or "Counter", and faceroll. No matter what archetype you are, OH NO IT'S WOBBA! got its set name for a reason.

Well, that's it for me. I'm fucking exhausted now. So uhh, TL;DR - GET THIS OUT OF UBERS NOW.

(Shrang that last bit was just for you bby <3) 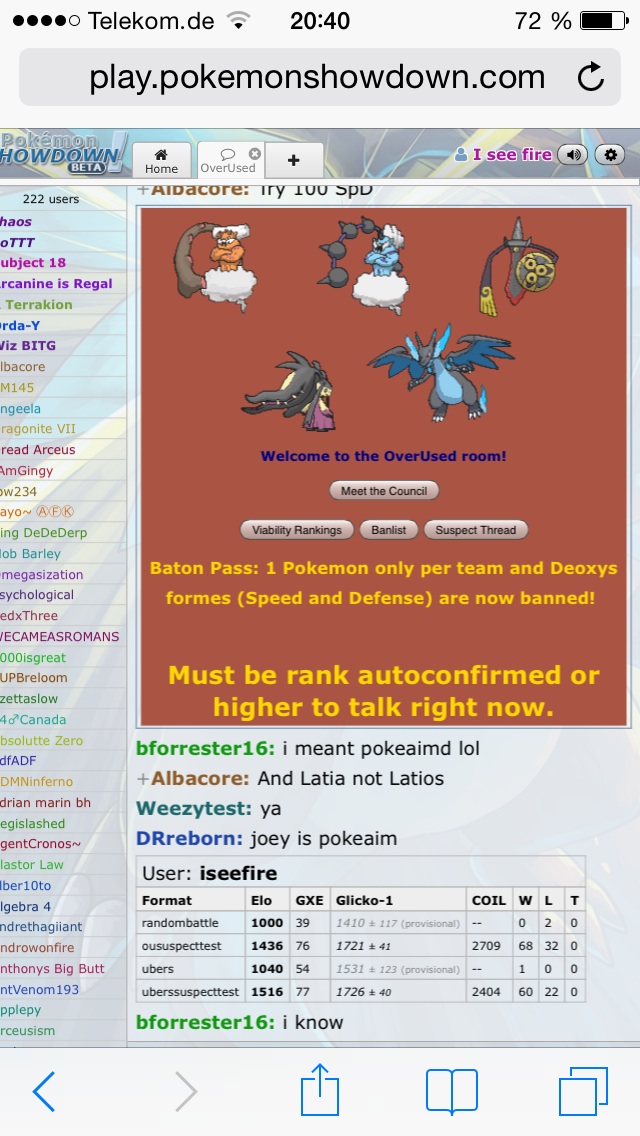 Ladder is aids. Thats the reason why I don t ladder on PO/PS anymore. Ladder makes you salty everybody will agree with that imo. I battled some people more than 5 times it was very lame User C Allstar was a good opponent and it was fun to talk user RayquazaOuPls For the record, you don't need to post your paragraph here. The paragraphs should be posted alongside your vote once the voting thread is up.

I would like to make a special apology to Melee Mewtwo who I haxed badly all 3 times I faced...

Team Makiri carried me. Now that I have reqs, I'll try to experiment a bit with MGengar myself so I can be more informed. SO YOU GUYS ALL DOING UBER WELL AND GETTING TOP 20 OR ALL THAT SHIT. IM NUMBER FUCKING um 52 WOW. 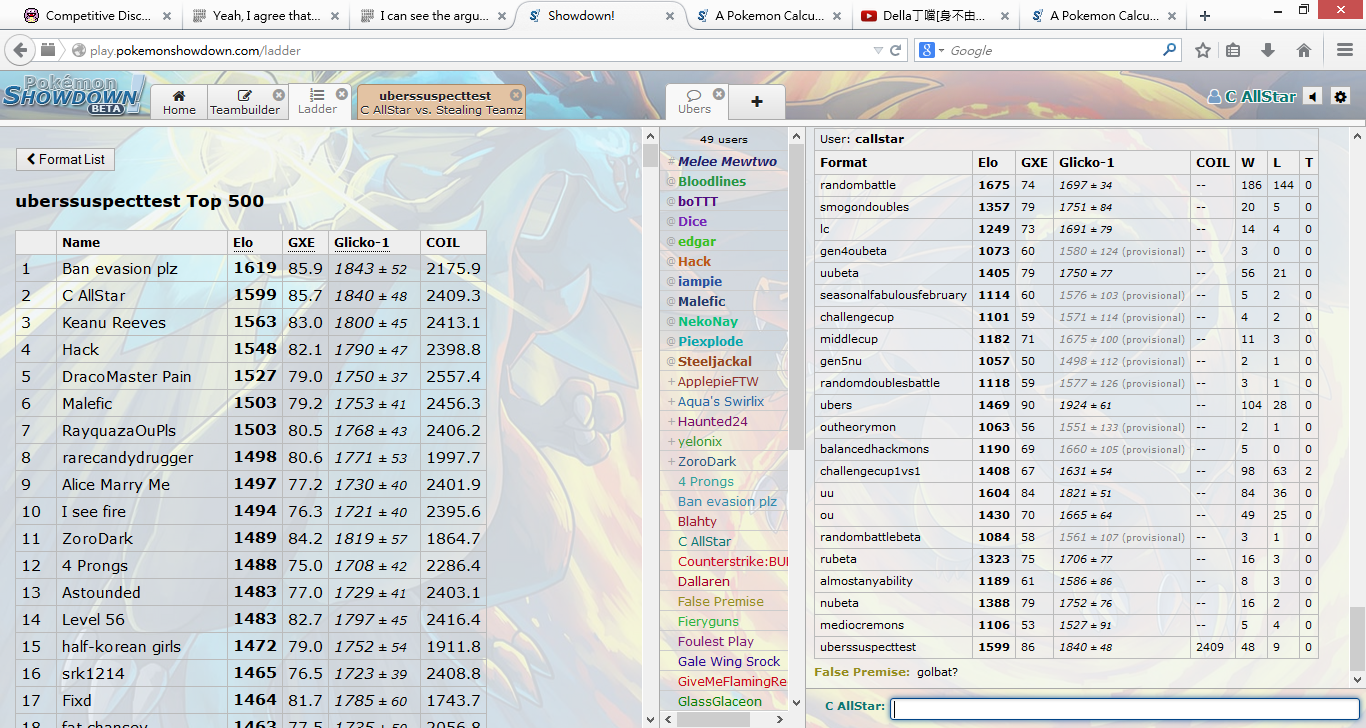 Laddering makes me so tired lol. 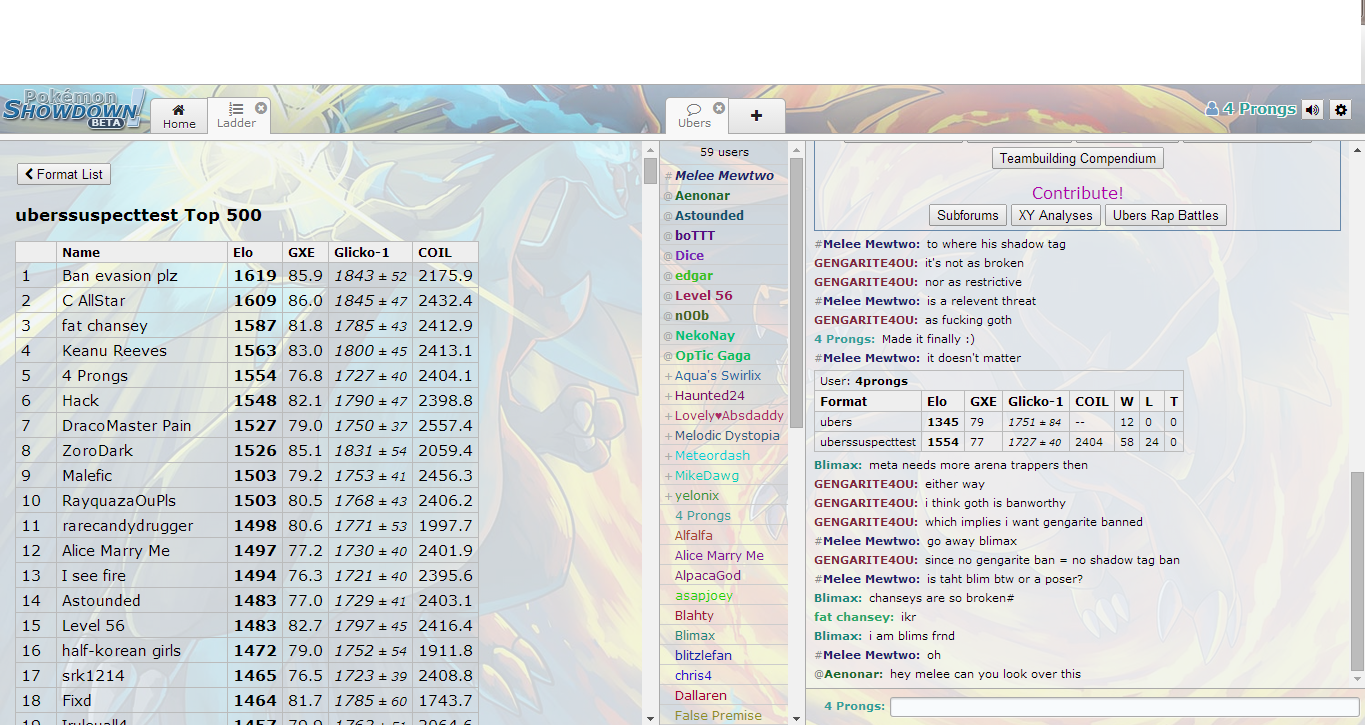 Done! No more laddering for a while now :) Fuck this bullshit ladder. A combination of shitty internet (lost around 20 games or so due to d/c'ing, and horrendous luck made getting reqs nearly impossible. Also will post thoughts on suspect later. Sorry for those I raged at. Fuck laddering btw. Biggest waste of time ever.

This ladder is the shittiest, most cancerous ladder I've ever played on.

Who needs wings when you have Rokushiki? (Apart from one guy who gradually adjusted his team to counter mine aside) Ladder is getting way too haxy these days.
Last edited: Jul 29, 2014

When does the period end btw cuz i wanna ladder and vote but i cant rn :(

ogasian said:
When does the period end btw cuz i wanna ladder and vote but i cant rn :(
Click to expand...

(Apart from one guy who gradually adjusted his team to counter mine aside) Ladder is getting way too haxy these days.
Click to expand...

Fireburn just confirming that I have met the reqs as you can see in the above pic that user "imma fly" has posted. By the way the ladder has become way more cancerous than it was before o.o