I got silver for necrozma!!

lavarina said:
View attachment 378259
i'm finally, finally at silver. this took way too long and i felt like i was going insane. which i already am considering i did this for mORE THAN FIVE HOURS. HOW DID IT TAKE THIS LONG FOR ME TO GET TO SILVER AAAAAAAAAAAAAA-
and ykw, i'm not done. i am Aiming platinum with this damned plant wig, a steel magnet with eyes, and a.. whatever tapu fini is.
for now though, i will slap myself with self-conscience. at least this experience gave me the will to actually learn 1v1 format wwww
Click to expand...

i give up
i think its because i literally do not know how to take a break, but god the amount of times i got so close to gold only to tumble back down again. hell i even got back down to 1000 at one point and i just, kept playing cksjxnkd

this challenge really is fun, it really is! but before i let myself go on a damn hyper spree again, i will be stopping this challenge and join the next one instead. no i will not touch necrozma because i have now developed a sheer hatred for it.

i hope tangrowth forgives me for not doing it justice. hopefully someone else can reach platinum with it. but bet i will come back to the next challenge you will see my dumba** again because i do not know the thing you call "self-restraint", and it's fun wwww

also you might ask why am i writing this, its because why not. theres literally no moral here its just me being dumb wwww also just tell me to take this down if this is too weird

also scizor can die in a hole, yee

Bronze for Tangrowth and what I'm saying in chat is the truth. Also I stole teams from doc1203 hehe lol. Also I'm not laddering any more, I need to farm GC points.

First of alI I would like to in as 1vCLC 1b montegom.

Suggestions for the next cycle:

Last but not least I would like to talk a bit about Necrozma and the core A challenge:

Necrozma @ Choice Specs
Ability: Prism Armor
EVs: 252 SpA / 4 SpD / 252 Spe
Modest Nature
- Prismatic Laser
- Photon Geyser
- Heat Wave
- Earth Power
​
This is the set I've been using through the challenge, I have reached silver and I'm leaving up for now cause I want to centre in core B. Necrozma is a good Pokemon in the 1v1 metagame at the moment. Its high Special Attack and decent Speed makes him a good offensive mon to keep in mind when teambuilding. Prismatic Laser is a good option if u know u are going to OHKO your rival but I usually prefer Photon Geyser, which is more reliable in a long term. Heat Wave and Earth Power are good coverage options that can take foes like Tangrowth, Magnezone, Zeraora...

This mon is a beast KOing strong staples in the tier like Tapu Fini with Photon Geyser (at least its very efficient versus Scarf-Trick sets), Naganadel and Togekiss. However its common weaknesses agains Dark- and Bug-type, let me a bit dissapointed. Volcarona, Urshifu-R, Durant... easily OHKO him with its STAB attack, being a bit difficult to play against team with this Pokémon.

During the challenge I have paired it with Urshifu in order to defeat other Necrozma (which use has raised due to this chall), bulky Steel types like Ferrothorn, Aggron, Registell that always give problems, other foes like Dragapult etc. etc. My last Pokémon was Togekiss (always carrying a Fairy-type), which give me many victories in the ladder and i think it can be a great partner, covering Necrozma's weakness. ¿What do you think? 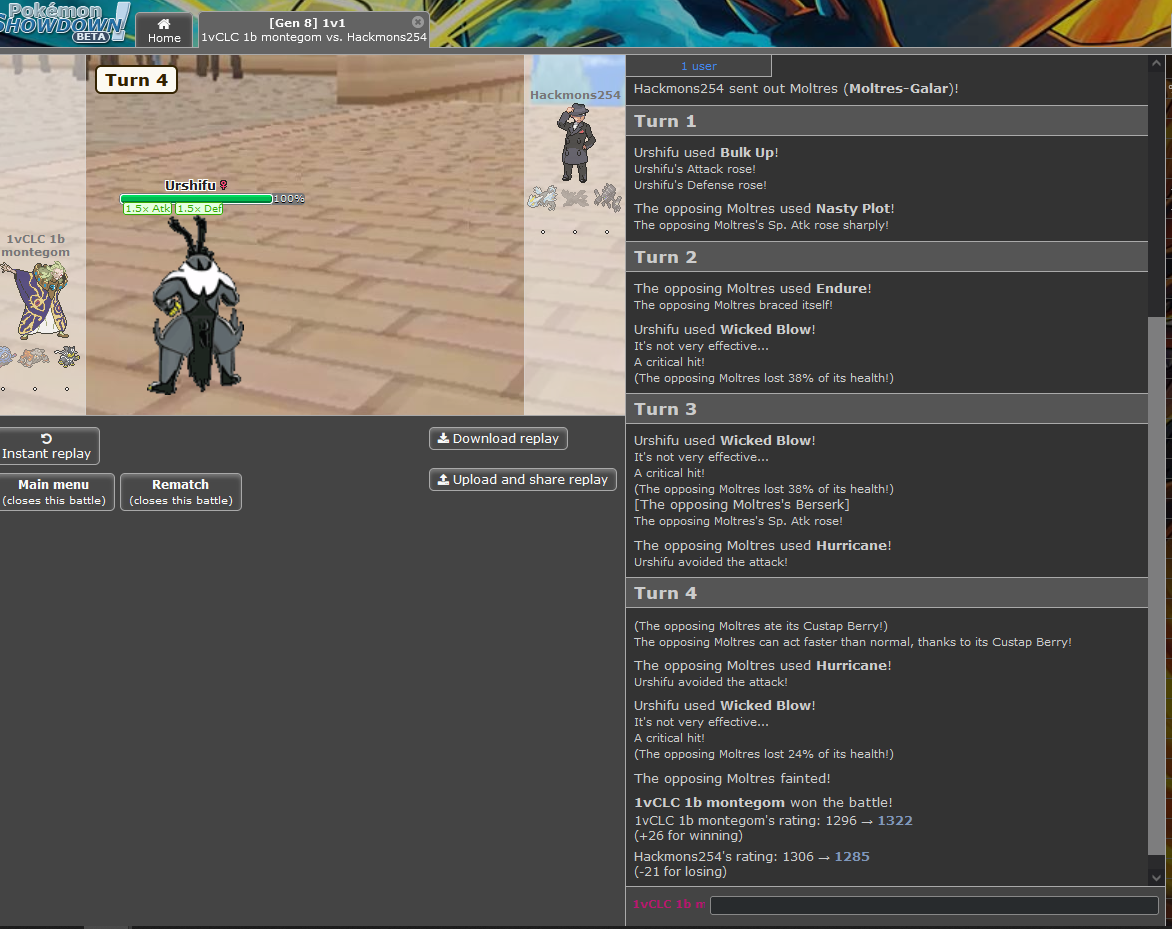 got plat for necro. gn.

Finally got to silver with necrozma (bad mon, drop on VR).

Justdelemon accidentally cheated by bringing the wrong team. They ended up self-reporting and forfeiting the match so I don't think harm was done. Because this happened after they already won medals, I'm letting them keep their Platinum Tangrowth medal, and not disqualifying them from the Necrozma medals, but they are no longer eligible for winning the Tangrowth or Necrozma highest elo

Finally got Platinum Rank. I do regret not doing Tangrowth though.

i got gold but i used wrong prefix

pls let me have gold

low ladder is the bane of my existence 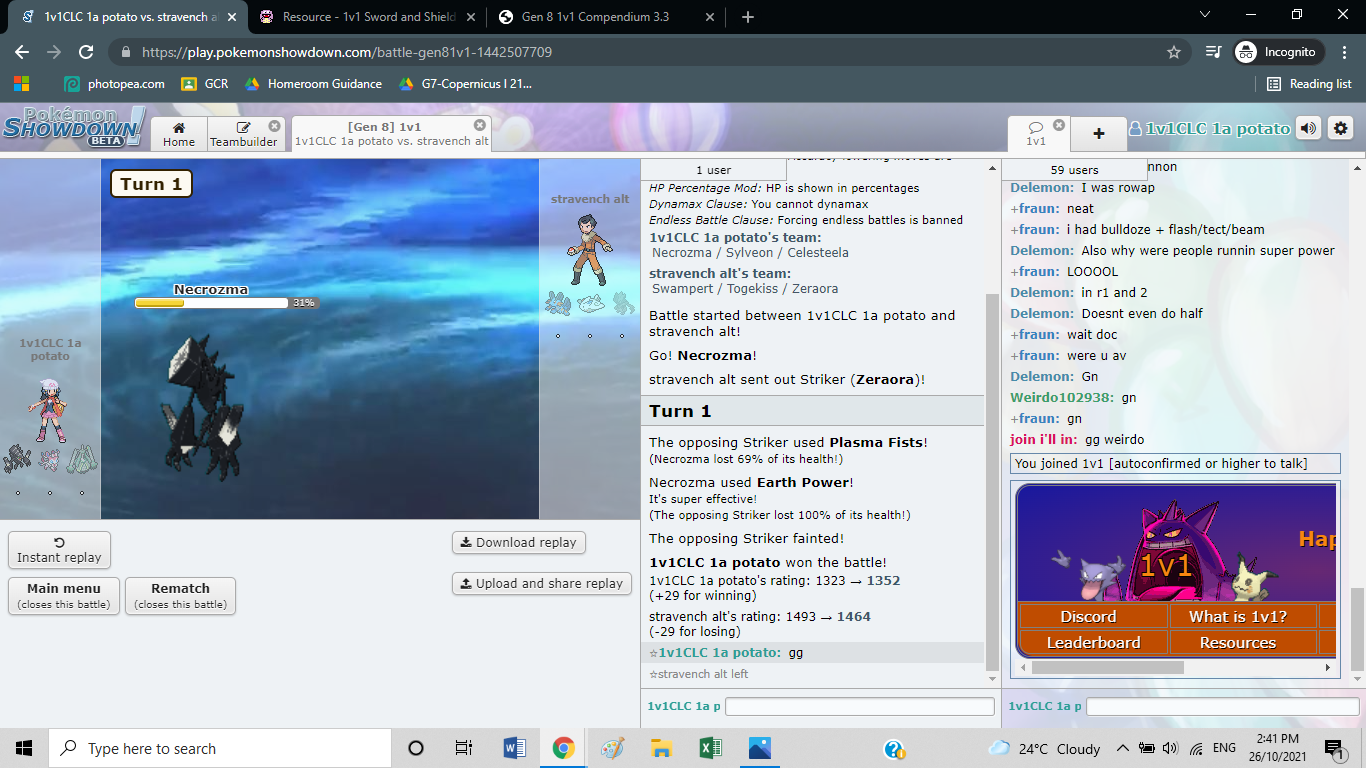 Users Who Are Viewing This Thread (Users: 5, Guests: 2)