5 Things That Should be in Generation 5

With the introduction of Pokemon Platinum, I returned to the games after a long hiatus. Platinum presented several notable new features; I particularly approved of the WiFi battling and physical / special attacking split.

However, I felt that more could be added to further enhance the games. While the majority of Smogon, myself included, seems to be focused almost exclusively on competitive battling, the vast majority of Pokemon's fanbase appreciates the story line and casual aspects.

This thread is meant to serve as a discussion for feature that you would like to see implemented in the upcoming Generation 5 games. Not that you have to follow my format, but I'm going to list 5 points in order of increasing importance with a brief description and explanation for each.

The cutscenes used in HeartGold and SoulSilver for the Ho-Oh and Lugia encounters, respectively, were wonderful. Cutscenes help to emphasize a particular tone during a crucial point in the plot.

One game that was notable for its extensive use of cutscenes was Kingdom Hearts: Chain of Memories for the Game Boy Advance. The short videos in it featured graphics superior to those in-game, which would definitely leave a greater impact on the player. In the new games, these cutscenes should be utilized much more; they would create lasting impressions and add to the game's depth.

With the DS, the level of graphics prowess was raised considerably. As a result, Game Freak now had much more graphics resources to work with, and could therefore improve the eye candy of the game.

Unfortunately, the company overdid it in the form of the new battle animations. Generation 3 had arguably the best animations in terms of balancing looks and efficiency, but with the new games came horrendously long animations, some of which lasted for several seconds each. Even Tackle now featured a small explosion of sparks. What should be done in Pokemon Black and White is a rehaul of all the battle animations; each action should be changed to make use of the DS's graphics capabilities, but also remain reasonable in length. 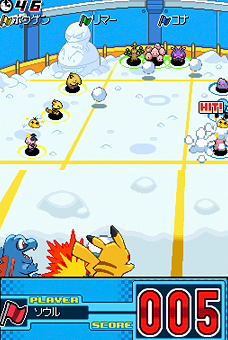 Platinum had Pokemon Contests and Poffin Cooking, but these pastimes were replaced with the Pokethlon in HeartGold and SoulSilver. Mini-Games add a different side to the main storyline, and often contribute additional hours of potential gameplay.

The problem is, these Mini-Games seem to be being replaced in some games for newer alternatives. Each significant Mini-Game added should be permanently featured in following games.

One of the best new features in the Diamond and Pearl series was the introduction of WiFi battling and trading. For the first time ever, players could battle or trade with anyone across the planet, rather than being tethered to a link cable to achieve the same means.

The most notable flaw in this system is the fact that WiFi battling relies on obtaining a Friend Code to actually conduct the battles. This slows down the entire process considerably, as a player looking for battle usually must sign up for a forum if they intend on battling on a regular basis. A feature that should definitely be implemented in the next generation is the ability to randomly match up with an opponent. The new system would pair up two players automatically, without the need of Friend Codes; however, these codes would still be retained to allow players to battle specific people.


1. Change Up the Storyline By now, everyone is familiar with the repeating pattern of collecting the specific region's 8 badges and advancing to the Elite Four, usually accompanied by a small side quest at the end of the game.

This is a potential problem for fans of the game. Despite its continued success, Pokemon has never been able to recreate the same sense of discovery and adventure that the original games contained. Therefore, a dynamic new idea that could possibly attract new players to the series would be to completely alter the process of proceeding through the game.

The system of 8 badges and an Elite Four should be retained, as they comprise an essential part of the Pokemon storyline. However, the magic of the original games, present in scenes such as the SS. Anne and Team Rocket Hideout, should be recaptured. One manner of achieving this would be to add a far greater amount of similar story-driven quests into the game. Thus, the playing the game would not be comprised of merely leveling up Pokemon and defeating Gym Leaders, but actually proceeding through new plot lines, which should include a greater amount of depth. Platinum had a good idea with the Distortion World arc, but each game has only one or two really major story quests in it. I personally would prefer for the quests to be the primary focus of the game, and for many more to be added.

I agree on most if not all of your points
I think they should add a Darker plot like the Special Manga, where the Elite 4 is trying to take over the world or something like that. I thought with Pokemon Colosseum and XD the plots where about to change but I was wrong. I think it's enough of the 8 badge then elite 4 story. Bring Something new
Another thing I would like to see is balancing out some pokemon, perhaps evolutions can help, seriously a shapedo evo wouldn't be bad

Despite the fact that you defintely put effort into presenting this thread, we already have a massive thread about speculations and wants for the incoming Gen. V, so please use that.