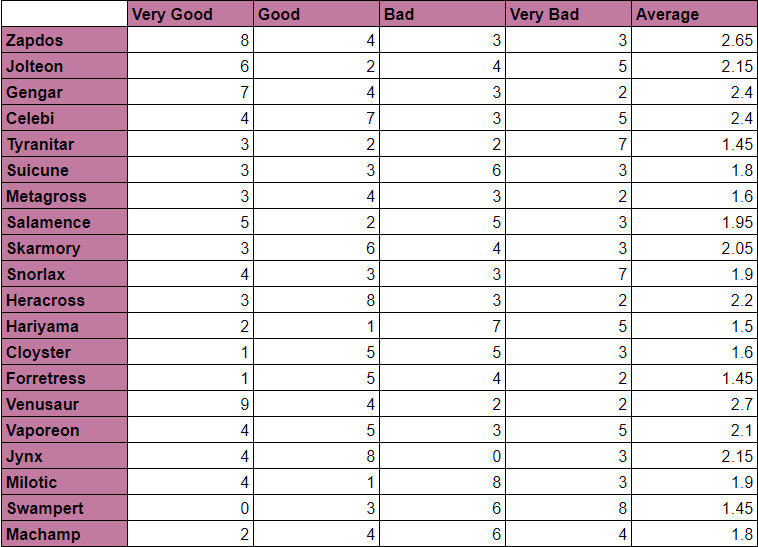 Some concepts to explore might be the causes of the differences between matchup spread and usage, impactfulness of a lead, staying power (Jynx will do jack shit if it sleeps something then Blissey comes in whereas CB Meta or MixTar will cause permanent damage), rate of return on investment of free turns (lead matchup is really just 1 free 'free turn'; TTar sets sand indefinitely with 0 free turns, Skarm sets Spikes with 1 free turn; both worth 100s of percent over the course of a match), flexibility (Zap will always be special with status whereas TTar could be band, fast mixed, physical, DD, slow mixed...), etc.

This is cool.
The matrix has the Hariyama vs Jolteon lead as bad both ways? Probably a mistake.

Also, are they supposed to be exact opposites, or is Hariyama vs Gengar "bad" and Gengar vs Hariyama "very good" acceptable, as I see it in the matrix? There might be a few others - for example I also just noticed Zapdos/Heracross are not exactly opposite in their relationship.

Just curious now.
Because there could also be a negative metric like "punishability" that tracks or indicates that a lead can be punished on account of it having many "bad" and "very bad" matchups.

Oxypad said:
This is cool.
The matrix has the Hariyama vs Jolteon lead as bad both ways? Probably a mistake.

Also, are they supposed to be exact opposites, or is Hariyama vs Gengar "bad" and Gengar vs Hariyama "very good" acceptable, as I see it in the matrix? There might be a few others - for example I also just noticed Zapdos/Heracross are not exactly opposite in their relationship.

Just curious now.
Because there could also be a negative metric like "punishability" that tracks or indicates that a lead can be punished on account of it having many "bad" and "very bad" matchups.

In theory, they are supposed to be opposites as you pointed out. There are definitely mistakes in the matrix in places. I've gone ahead and fixed the ones I've been alerted to and added Swampert, Milotic, and Machamp as well.

Punishability as a metric is a neat concept, but requires usage stats integration in order to be accurate, and as such, will always be a fluid value. For example, Milotic has "Very Bad" lead matchup against Jolteon and Zapdos, but Zapdos is more frequent as a lead by a factor of 4 (let's say for the sake of the example; this is not accurate usage data), meaning its "Very Bad" matchup should be 4 times more heavily weighted than Jolteon's in the calculation for Milotic's "punishability."

I have noticed venusaur has quite a lot of good matchups with only a few bad ones but poor usage stats at least from wcop and my own memory. Is the reason venu isn't used more a case of it abusing more niche matchups while only doing decently against the popular ones or because venu teams are quite niche themselves?

Moderator
Venusaur is indeed pretty niche. It's not easy to build with, and it's not easy to use well. Celebi is the golden standard of a grass type pokemon in ADV OU and one must ask what advantages venu has over it. That's mainly sleep, and to use it means having good reasons to value sleep over defensive prowess through better stats and recover, or offensive prowess through the calm mind and/or baton pass set.

Using sleep well tends to require partners that can abuse the sleep, as venusaur (just like any other sleeper) frequently has no immediate offensive prowess to follow up. The philosophy I subscribe to is that since sleep is finite, every turn spent burning sleep is precious, and one way to abuse sleep is to bring in glass cannons during those turns. Such partners may include Choice Band Metagross, Moltres, Heracross, or anything else so frighteningly powerful that can exploit a free turn from sleep to switch in. These can either be done by switching these threats in on a sleep turn, or by predicting the switch of the slept pokemon in. A common train of thought that can be exploited is that the slept mon is seen as the most useless and can be used to pivot into all sorts of stuff, so one can double switch on the expected pivot. Speaking of exploiting this psychology, a common line of play is to sleep Skarmory, bring in a physical threat later in the game, and double switch to Magneton. But I digress.

Another way to exploit the threat of sleep with Venusaur is Spikes. By choosing to delay the use of sleep powder, Venusaur can keep the opponent guessing and rack up Spikes damage while spreading Leech Seed and Spikes chip damage around against Stall teams. To be effective with this style though, it is recommended to have Pursuit Tyranitar and/or Magneton to eliminate all sorts of hovering threats so that Venusaur can exert maximum pressure with Leech seed, Giga Drain and HP fire.

Regardless of which team archetype above Venusaur fits itself on, it immediately becomes a trickier deal to maintain broad defensive coverage, just because Venusaur itself is barely a good check to anything. It takes lots of damage from Swampert and paralysis from Zapdos really hurts it. Using Celebi wouldnt have subjected one to these issues. Thus these teams either end up filling the rest of their ranks with stuff that looks repeated, or one would have to get creative. One might also have to play well to overcome these coverage deficiencies.

thelinearcurve is a fan of Venusaur, so maybe he has more to say.