Pending allow users to challenge and battle themselves (for testing purposes)

What if you could challenge yourself, pick 2 teams, then play both sides?
Obviously not on ladder or tours, but it would be extremely handy for testing battle mechanics, like really really useful.
I know you can open a different browser with a proxy and pick a different name but that's kinda annoying to do, and I don't think being able to test things yourself more easily would have any bad consequences.
If people spamming this becomes an issue for some weird reason, you could simply make it trusted only.

PS Admin
You don't have to use a proxy; a private browsing tab is all you need for testing (such as Chrome's incognito mode).

I know the technical limitations behind why this isn't the case, but I will second that I would like to have the feature for development purposes. Having to log into a second account and managing two windows is a drag for testing things. I've gotten used to it, but it would definitely be convenient to be able to self-challenge.

As far as I understand, the reason self-challenges aren't possible is because that's not how PS is fundamentally designed to work. If you have two logins for a single account (say, your phone and your computer, or you and a friend), then whatever actions battle-wise / PM-wise that occur on one instance of the account are instantly seen and viewed on the other instance of that account. It's commonplace to see YouTubers battling on a shared account, for example, where one player might choose moves one turn, and another player might choose moves the other turn. I'm pretty sure to allow this sort of behavior is the reason why self-challenges aren't possible right now.

I guess self-challenge battles would have to be a special case, so for example shared accounts would simply not be compatible with it.
Another solution I can think of is that for each such battle a temporary second technical account is created (so for example if I self-challenge it temporarily creates a $Vrji1 account), then the battle is between Vrji and $Vrji1, and then clients could seamlessly switch between both, ideally it would automatically switch to $Vrji1 whenever I click that particular tab.

Not a Yuyuko fan

Creator of PS
Yeah, it's annoying for testing, but challenging yourself would definitely pose a lot of complicated UI questions.

I guess the controls would need to be tabbed or something?

Moderator
I want to voice my support this because despite it constantly being shot down I strongly believe it should exist. I have largely the same grievances as DaWob.

DaWoblefet said:
I know the technical limitations behind why this isn't the case, but I will second that I would like to have the feature for development purposes. Having to log into a second account and managing two windows is a drag for testing things. I've gotten used to it, but it would definitely be convenient to be able to self-challenge.
Click to expand...

This is largely my experience. Managing two windows is very annoying and sometimes I get logged into the same account on both and whatnot, so I end up having to get a second browser up to deal with that. It's really not "just open another tab" or whatever, it's super annoying and the initial setup makes me less inclined to test interactions for bug reports, and I have had to do that a lot.

Even outside of this, I also dislike going on the ladder under an alt or something to test some weird team I've made when it's just to test if the interactions and turn order go as planned; this especially applies to doubles when there's a cool interaction I found. I either have to go on another tab/browser/whatever my PC decides that day or inconvenience someone on low ladder with a team that may not even be functional. Neither of these are convenient.

Is it at all possible to have the tab / two window thing on PS work for self-challenges? You can have two battles going on one screen at once that way, so maybe that could work if you don't want to create a whole new "thing" for it?

Seems easy enough to have a challenge self option here too; 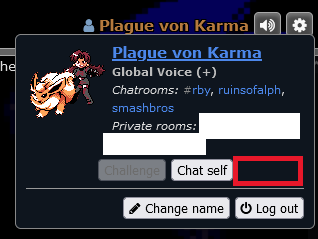