If Shadow Sneak in a combo, use Teleport (Evasive) that action.

"This is where you fall, knave."
Shadow Sneak+Shadow Sneak-Cooldown-Faint Attack
Evasive teleport has +1 prio. Shadow combo has 2 :P


And now Trixie was killed by the Crystal King.


Long story short, i cant post so many images on the same post on this computer, so just pick the next type :P

The ponies fell like flies before Baal's might, and the duo moved on to the next foe. "Even in this form, you still stand no chance," Baal declared. Analyzing the equus specimens before them, Complications made a decision. "Bug seems like the a wise candidate for our next victim."


NO PONY THIS TIME

Abilities:
Leaf Guard: (Innate) In bright sunlight, the Pokemon is surrounded by a faint green glow. The glow protects it from all permanent and temporary status conditions.
Chlorophyll: (Innate) During bright sunlight, this Pokemon’s cells absorb more solar energy, doubling (x2) their speed.
Overcoat (DW): (Innate) This Pokemon has a sturdy exterior that rebuffs the elements, making it immune to damage inflicted by bad weather. If the Pokemon is already immune to at least one (1) kind of weather by typing or a different ability, Overcoat reduces the Base Attack Power of all oncoming attacks by one (1).

"Huh... One of the others must have beaten your trainer already."
Meteor Mash-Payback-Meteor Mash
If Successful p/e action, Faint attack.
If Grass Whistle, protect, but only once.

Trainer? What are you talking about?

Because you are attacking me, you fucking moron! Do you always make sure your opponent cant strike you for neutral damage when picking on someone?

You bore me. Go back to your dumb war and leave me alone.

"Remind me to make your torture particularly elegant when I return."
Flying, please. 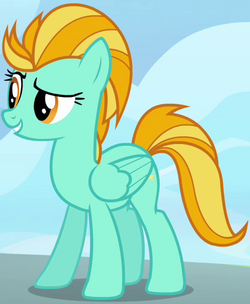 You are way too slow!

Farfetch'd (F)
Nature: Jolly (+15% Spe, +5% Acc, -1 SpA)
Type:
Normal: Normal STAB; adapt comfortably to any surrounding after 3 actions. Able to use Outrage without losing focus.
Flying: Flying STAB; immunity to Ground attacks except under the effects of Smack Down and Gravity, even for ground-based flying Pokemon. Will always hit foes with Dig (except other Flying types) and Dive. Cannot be hit by Dive unless the attacking Pokemon has a size class greater than four (4). Immune to Spikes and Toxic Spikes. Enhanced aerial mobility. Superior senses in open air arenas.

Abilities:
Keen Eye: (Innate) This Pokemon has extremely good vision and cannot have its accuracy lowered by an opponent through any means (including accuracy lowering attacks, Smogs, Hazes, Fog, etc.). Its attacks are still affected by an opponent’s evasion and the Pokemon's own accuracy.
Inner Focus: (Innate) When an opponent attempts to flinch this Pokemon, it stands firm and continues its attack. If it has another ability that would be activated by flinching, that ability activates.
Defiant (DW): (Innate) The Pokemon has a deep sense of honor, and whenever one of its stats are decreased by an opponent's Attack or Ability, its Attack increases by two (2) stages. Attack Boosts gained this way are not subject to deterioration that round.

"You are one sad, strange little pony."
Meteor Mash-Payback-Meteor Mash
If successful Dodge, use Faint Attack on that action and push down. What are you talking about?


If you are taunted, use U-Turn that action, but do not push-back.
If successful Protective/Evasive action, use Swords Dance that action and push-back

Lost the reffing somehow. No crits and Meteor Mash misses.