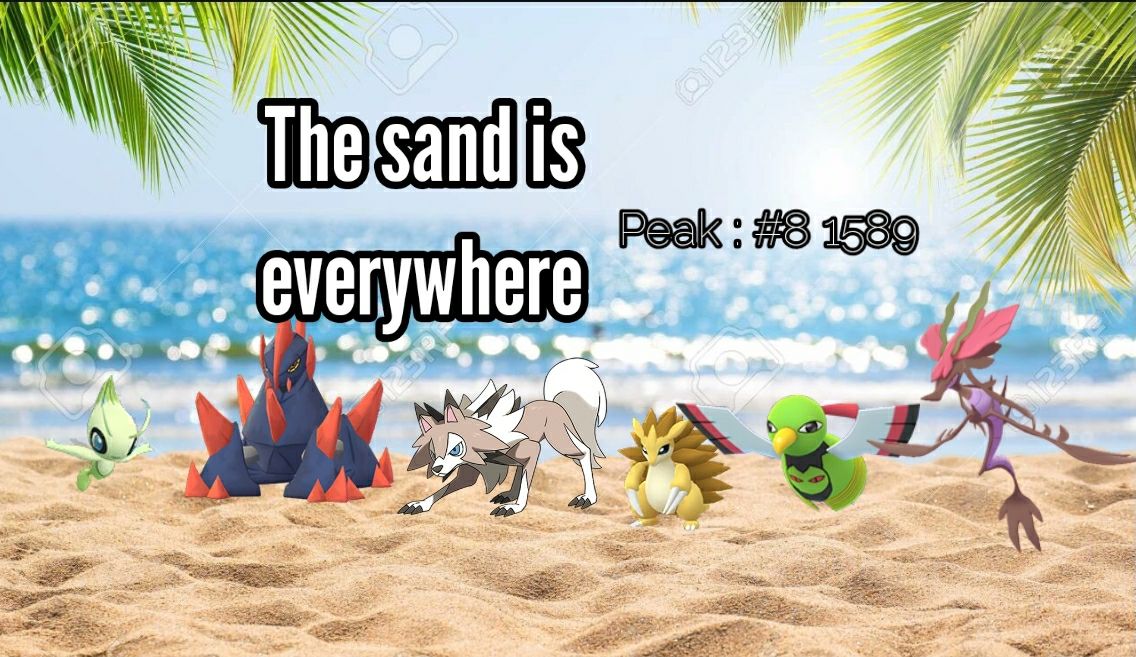 Hello! This is my first ever RMT. I don't really have a particular reason as to why I am posting this, but I thought it would be fun. Especially since most of the mons on this team are Pokemon you really wouldn't think to see, let alone use on higher portion of the ladder. Ever since hail was recently banned, it made me about sand. In particular, it reminded me of the sand team @wuhoobear built a few weeks back. I believe with the departure of hail, that sand has a legitimate niche in the metagame. 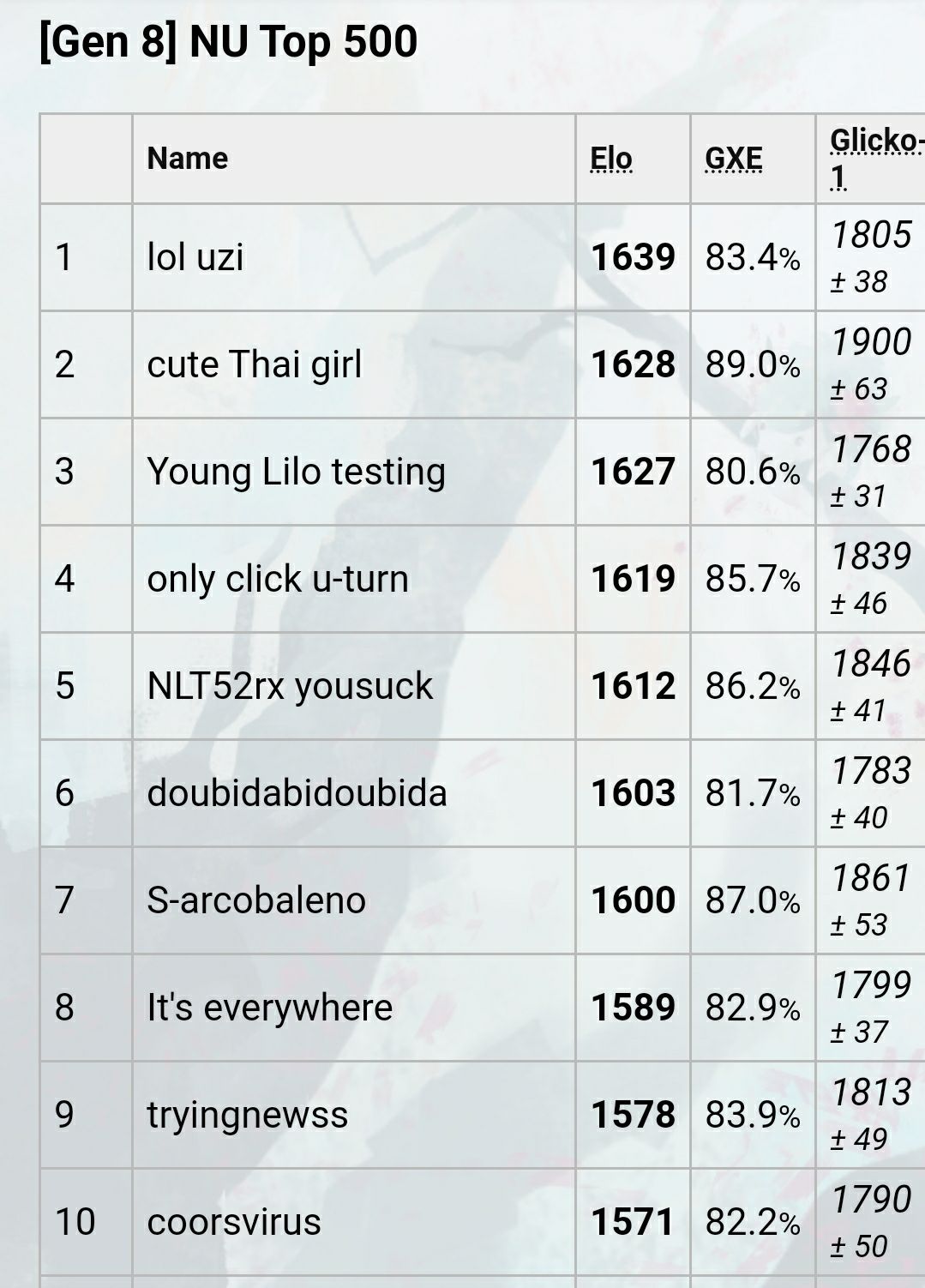 Gigalith was the first member of the team, providing sand for the abusers. It is the team's rocker, and provides valuable support for the team. Able to blanket check a large portion of the tier's special attackers, while threatening status and rock blasts. Max special investment further helps gigalith in sponging up special hits. Most notably from dangerous dragon types, specs exploud and sylveon, and powerful psychic types. Earthquake is on gigalith due to it's ability to hit tyrantrum and copperajah more effectively. Gigalith is extremely slow, meaning that it's not worth trying to speed creep any other Pokemon. That is why I made gigalith have 0 speed ivs, as it is able to 'outrun' many Pokemon under trick room. Most notably, glastrier and the rare vickavolt. Despite not having any recovery, gigalith is still able to last for a long portion of many games. Meaning you have many chances to activate sandstream.

The second addition to the team, lycanroc naturally fit on the team due to it's sand abusing ability. It's incredible speed allows it to outrun many targets, that the other abuser on the team, sandslash may not outspeed. For instance, alolan raichu under terrain, and scarfed flygon. Lycanroc's raw power allows it to ohko many targets, such as copperajah, guzzlord, and starmie, just to name a few. Lycanroc also benfits from the sand stream another way, as it's able to gain a special defence boost. This allows it to reliably set up on Pokemon such as defensive Sylveon, potentially sweeping on the spot if it does. Even though lycanroc hits extremely hard, you cannot break past mudsdale or diancie, and oftentimes will miss stone edge, sometimes costing games.

Sandslash @ Life Orb
Ability: Sand Rush
EVs: 252 Atk / 4 SpD / 252 Spe
Adamant Nature
- Earthquake
- Knock Off
- Swords Dance
- Stone Edge
​
The second and final abuser of sand on the team, sandslash is very potent if played correctly. It's able to set up on Pokemon such as steels and rock types like tyrantrum. Oftentimes, you don't even need setup to break holes through the opponent's team. In the early stages of the game, knocking off a Rotom-C's choiced scarf, or a flygon's rocky helmet are very crucial. Speaking of rotom-c, you are actually faster than scarfed rotom under sand, meaning that a chipped rotom is able to be picked off by sandslash. Stone edge is on this set to hit flyers that would otherwise be annoying to kill, such as mantine and talonflame. Defensively, you aren't able to tank much hits. However, against many physical attackers, you are able to switch in once. For example, copperajah and tyrantrum.

The sand abusers and gigalith do not appreciate bulky water types, such as vaporeon, nor do they appreciate the presence of ghosts and fighters. Celebi patches up those problems, able to serve as a check to dangerous Pokemon such as, but not limited to: Machamp, vaporeon, sirfetchd and golurk. Itemless means you have a favourable matchup against ghost types, which would otherwise destroy the team. The ev spread allows celebi to be faster than jolly tyrantrum, with the bulk allowing you to comfortably tank blastoise's +2 ice beam, as well as strong knock offs from the previously mentioned fighters. The special attack allows you to hithard, preasuring vaporeon easier.

The team up to this point is relatively weak to foes such as mudsdale and copperajah (if copperajah is in vs gigalith or celebi, there's nothing you can really do). The team also struggles somewhat vs. Bronzong. Xatu handles all of these threats, as well as being an emergency answer to foes such as fighters, comfey, and the rare nasty plot celebi. Xatu is able to hold off these Pokemon, while pivoting out. Providing a safe pivot for the otherwise squishy sand abusers. Xatu is also great for defensive flygon, which is something the team really dislikes. The speed evs allow you to outpace machamp, which can otherwise just hit you 2 times until you are dead.

The secondary blastoise check on the team, dragalge serves the defensive purpose of being an extremely good pivoter, and being a good fighter check as well. It can come in on a wide array of Pokemon, most notably vaporeon and mantine. It's able to set toxic spikes, so that the abusers have an easier time handling vaporeon. Common defogers such as defensive flygon and rotom are all destroyed by dragalge's stabs, with mantine also needing to worry about sludge bomb poisons. Once mantine/vaporeon/flygon are weakened, the abusers have a way easier time of cleaning late game. The speed is for outpacing base 60's such as vaporeon and sylveon, as well as other dragalge that run less speed.

This matchup is extremely difficult especially if it's running ice beam. What I usually like to do is go into gigalith to sponge a hit (they usually won't be expecting it), then swap to celebi on the water attack. Utility starmie isn't that bad to deal with, but it's the offensive variants that give the most trouble. Positioning wise, just try to safely bring in lycanroc and sandslash.

The key to playing this matchup is to never see gigalith if you see this in team preview. I like leading dragalge when I see a sirfetch'd on the opposing team. It forces the duck out, while providing utility such as momentum on their steel, or setting up toxic spikes. In the event that they do not lead sirfetch'd, you need to try and predict what it's gonna do, which is actually pretty easy. Celebi is able to tank any hit bar first impression, which they likely wouldn't go for on a gigalith or xatu. Since it's so frail, Lycanroc and sandslash's close combat and earthquake are able to kill it after some chip, which xatu is really nice for.

This matchup is tougher, as no one member on my team can really handle it. What I usually do is lead gigalith and bait the close combat on xatu. From there onwards, I can threaten with a heatwave, chipping it down to where another member on my team can revenge kill it. Against trick room, you need to sack accordingly, making sure to preserve gigalith to rock blast outspeed it

I do not have a steel type on this team, meaning this matchup is actually harder than it seems. What I usually do is try to preserve gigalith and dragalge throughout the course of the game, to hopefully try and status it/ weaken it. A weakened xatu is also very important for the comfey matchup, as it's able to deal rocky helmet chip if it decides to draining kiss.

Lumping these two together as they are both pretty similar to deal with. Usually when I see either in game preview, I like leading dragalge as it won't die to any one hit, and will threaten an ohko on both. If they do not lead with them, you need to try and make sure they don't have opportunities to get in. Always keep up momentum. For instance, I always click teleport with xatu to minimize their switch-ins, even if xatu is low on health. Same goes with celebi, but for u-turn. The key is to try and position the sand abusers to try and finish them off.

Thanks for reading all the way through here :)

Cool team! I have a few ideas that might help balance out the team a bit. I don't think all of the changes need to happen, just some things for you to think about.

1. Make the celebi item colbur I know No item gives you a polter immunity as well, but i think this could really help out
2. Change either Celebi or Xatu: I feel like doubling down on the psychic types here is pretty unecessary. I think a dark-type would fit this slot pretty well, maybe somthing funky like a Defensive silvally-dark, that we you can still preserve momentum.
3. Add Dazzling Gleam to Xatu/Celebi's moveset: With the special attack investment you currently have on celebi, this would OHKO guzzlord.
You must log in or register to reply here.
Share:
Reddit Pinterest Tumblr WhatsApp Email Link