Hi guys, KyleCole here. The break from forums was shorter than expected. Let's not make a big deal about it. Anyways this is a team I started using a couple of days ago because I was absolutely sick to death of VGC 16 and wanted to get back into the fun of Doubles OU. I didn't want to have to think too much so I made a standard team with some interesting sets and spreads and it ended up topping the ladder.

I reset my ladder score at ~1450 when I started using this team, and when I took this screen shot; 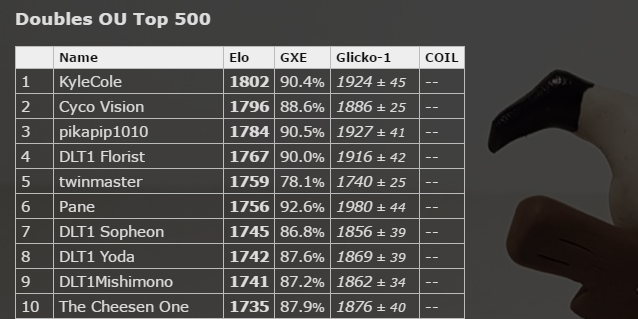 I had a record of 27-2, which is essentially only my games from 500th place and upward. (I still have the W/L if you wanna go check, I've just decayed a bit so I didn't screen shot). Anyways let's get on with what you're actually here for. Here's the team:

A pretty standard Mega Kangaskhan set; Inner Focus to dodge flinches from faster Fake Out users, Fake Out, Power-Up Set-Up, Normal STAB, and Priority. The EV spread is less common; max speed because you need max speed to compete with the many other base 100s (particularly other Mega Kangaskhan), Jolly Vest Lando-T, Timid Hydreigon, and Timid Kyurem-B. I run enough bulk to guarantee that Mega Kangaskhan survives an Aqua Jet from +6 Azumarill and a Superpower from Adamant Landorus-T. The remaining investment is dumped into attack. Frustration is used over Return because if a max happiness Ditto or Smeargle transforms into Kangaskhan they won't be able to use the normal type attack for significant damage.

O man O man. Landorus-T with a Choice Scarf! Another common set on a common Pokemon; STAB Earthquake, Rock Slide for flinches and coverage, U-turn for preserving/generating momentum, and superpower for coverage. The EV spread has max speed to compete with other Adamant Scarf Lando-t, and enough bulk to live 2 -1 Brave Birds from LO Talonflame, or a +1 Sucker Punch from LO Bisharp. The remaining EVs are dumped into attack. Jirachi, Volcanion, and Azumarill all lack significant physical defense investment, and Kangaskhan and Thundurus appreciate the support as well, so it's Lando's job to spread intimidate around as much as it can.

This Thundurus set is the best set. Thunderbolt for STAB, Thunder Wave and Swagger for the two best support moves in the game, and Flash Cannon for coverage against Diancie. The EV spread guarantees that Thundurus survives a Diamond Storm from Mega Diancie and it makes Heat Wave from Modest Heatran with 232 SAtk EVs a 4HKO with Sitrus Berry (and spread reduction). It also outspeeds my own Jirachi by 1 point.

Don't ban swagger. Don't you even think about it. Yeah swagger is annoying when you're playing someone who just clicks it needlessly, but you can rest easy knowing that player isn't winning the majority of their games. Swagger is a necessary evil. It stops the tier from being swamped with hordes of Calm Mind set up or nonsense stall mons, and saves Doubles OU (in part) from becoming plagued with match-up issues. On this team, Swagger + Thunder Wave was particularly important for beating Calm Mind Cresselia, Aegislash (it essentially needs to take twice as many confusion rolls and is punished more for each one), and whatever random set up/stall the ladder could come up with. I won't pretend that Swagger didn't bail me out from a couple of games that I would've otherwise lost, but is that really such a bad thing, or did I just use the best moveset?

I'm honestly not sure how common this Volcanion build is. Steam Eruption is basically a better Scald, and Heat Wave is a great spread move, with Sub to protect Volcanion or set up a win. I went with a Timid nature and max speed because outspeeding Modest Heatran was really important for this set, and after that much investment might as well go max speed to tie with Breloom. Running Max speed also lets Volcanion outspeed a wider range of Pokemon after they've been hit by Icy Wind from Jirachi. Shuca Berry is for Timid Heatran (criminally underused set btw) and slow Heatran in Trick Room. I never missed the leftovers recovery, so don't suggest that. Oh and max special attack obviously because hit things.

You can bet Jirachi is gonna be on every team I use until sun moon comes out and probably after that too. It flinches everything. If the threat is faster click Icy Wind until it's not and then flinch it. Is flinching not the answer to your problem? No sweat. Click Follow Me and set up the win with one of Kangaskhan, Azumarill, or Volcanion. Jirachi essentially invalidates Amoonguss with Safety Goggles (along with most other Grass types) so if the opponent has one preserve Jirachi's HP carefully, otherwise go wild with this busted thing. The EV spread hits 264 speed to outspeed Mega Gengar (base 130) after it's been hit with an Icy Wind, with the remaining EVs in special defense. I compensate for lack of defense investment by pivoting around with Landorus-T.

The greatest Pokemon to ever grace the game, Azumarill has taken more undeserved wins than any Swagger Pokemon ever will. Just find a safe spot to Belly Drum and win, and if you don't win then at the very least Azumarill will justify it's spot on the team. Knock Off is used over Play Rough for coverage against Amoonguss and Aegislash, but it also doesn't miss. The speed investment hits 187 to outspeed -1 speed timid Heatran. That sounds like a weird benchmark, but it was pretty depressing when I played a game, and couldn't KO the partner Amoonguss before Heatran knocked out Azumarill with Earth Power. Azumarill is also a phenomenal Trick Room check, and I almost always lead it in that match up.

If you use this team, you'll find it really easy to set up wins for PuP kang, Belly Azu, Sub Volcanion with -1 speed opponents, or a Scarf Lando late game sweep. Often your opponent will knock out one of your Pokemon at the wrong time, enabling you to get free set up. Just as often though, this team will just power through, regardless of your opponents. Having a team that can do it's thing no matter what your opponent might use is the secret to a successful ladder team. Figure out as soon as you can how you're going to win the game, it may be neccessary to sack a 100% health Volcanion during the game so that Azumarill can come in at full health the next turn and Belly Drum safely. Identify that kind of stuff early, and enjoy your rise to the top.

Kangaskhan has Fake Out, great. Now let's move on to the good stuff. With so many Pokemon that require set up to play at their most threatening level, the team needs to generate the turns to make that set up happen. Spread Rock slide with 27% chance to flinch each opponent (remember it can miss) is a start, but add that with Thundy's 45% Swagger roll (remember it can miss) and a 25% paralysis chance, AND the 60% Iron Head flinch chance from Serene Grace Jirachi. Your opponent is only moving when you say so. When they finally do manage to get a KO, hopefully you've put yourself in a position to get a free set up with a healthy azumarill like we talked about earlier.

I did a video on this team, and if you're interested in hearing a little more about it, or getting the importable in one smooth copy/paste, check it out here. Either way, thanks for reading and I hope you enjoy the team. Doubles OU is a really fun tier and if you've never played it you're doing yourself a disservice. Feel free to leave your suggestions if you have any!
You must log in or register to reply here.
Share:
Reddit Pinterest Tumblr WhatsApp Email Link