Metagame Multibility [OM of the Month]

Here are some fun sets I've been messing around with

Thanks to having access to both disguise and prankster, it can switch into fully buffed sweepers and guarantee a double KO situation since prankster's interaction with destiny bond is causes it to always be active assuming you're slower. Preferably you would just use this set to get a KO against something normally using disguise then KO whatever comes into revenge kill you with destiny bond.

Buffed by Punk Rock, Galvanize and your newly acquired STAB bonus, Boomburst hits like a truck. Sometimes I'll even pair it with a Tapu Koko set focused on baiting in-ground types and taking them out while also setting up Electric Terrain to further boost Boomburst power. Toxic is the one move capable of really punishing ground-type switch-ins and as a bonus, it can't miss.

Knock-off remains at 65 BP, the same as it would behave vs Z-Crystals and Mega Stones

Okay first of all a shoutout to Andad for coming up with this stuff, it's ingenius in a way.

There's a bug regarding the combination of Slow Start and Trace, which leads to Trace continuously updating itself, which poses the following problems:
-The Ability ALWAYS matches with the opponent's active Pokemon.
-Abilities such as Intimidate will activate multiple times.
-Drops enormous walls of text.
-Enables the opponent to stall YOUR timer. Meaning you'll lose due to inactivity.
(I'm eternally grateful for the timer being switched off before that happened.)

I still very much prefer it over facing that Moody Kyurem and Shadow Tag Toxapex that people had been using ever since the sets had been dropped here.
Last edited: Oct 2, 2021

With bug fixes rescuing the metagame, I wanted to share a fun team that has been working well for me in weather and priority spam meta.

The team is pretty straightforward TR with some anti-offense elements like Scarf Ditto and Psychic Surge + Dazzling Crawdaunt. One set I want to highlight is the Sirfetch'd set:

Scrappy + Tinted Lens makes for the most spammable CCs ever. This set only really needs one moveslot to function, since behind TR this mon is just going to be clicking one move, but the item makes First Impression actually a somewhat reliable revenge killing move.

Hope you give the team a try, it's a lot of fun to pilot. Yes, it loses to stall, but everything loses to stall! That will be the topic of my next post. Until then, happy laddering!

Every time I play mons I lose the mental fortitude to persevere.

Stench and King's Rock have been quickbanned!

​
Stench has proven an uncompetitive force in the metagame, having an unacceptably high chance to Flinch when used with Multi-Hit moves. A 5-hit Stench move has an innate ~40% chance to Flinch, while a Serene Grace boosted one caps out at ~67% for 5 hits. The sole purpose of this ability is to put the game in the hands of RNG, which is antithetical to Smogon's tiering.
Due to the variety of abusers including Skill Link users like Cloyster, Beat Up Weavile, and even Skuntank it is unrealistic to expect users to prepare for every possible user of Stench.

King's Rock is being banned based both off of the precedent and reasoning OU set and because of the same reasoning given above: it is solely used to push the game into being decided by RNG.

Primordial Sea and Desolate Land have been temporarily banned.

This is entirely due to the coding difficulties they are presenting and they will be unbanned when these technical difficulties are resolved. If they prove too good at that juncture we will have a discussion on them at that time.

Delta Stream is joining Primordial Sea and Desolate Land as a temporary ban for the exact same reason.
The primal weather abilities have been unbanned due to the technical difficulties they were presenting being resolved.

Tagging Kris to let him know that thing he tried to beat me with yesterday is getting banned ;)
Last edited: Oct 7, 2021

ok, i am asking for a ban of tinted lens, it's way too broken

Anpawo said:
ok, i am asking for a ban of tinted lens, it's way too broken
Click to expand...

Do you have any context/examples to provide? It isn't very productive to just say "x is broken" and not put in any effort to explain why you think so. There are no absolutes, so if you truly believe an element is banworthy it's on you to try and prove it.

This team has done pretty well in the short time that the ladder has been up (peaked #1 if you care to know that kind of thing), but mainly I just wanted to share my thoughts on stall as it stands in this meta. Frankly, I do not believe it's necessary to run double regen on bulky teams--in fact, in a lot of cases double regen is probably prone to getting switch-stalled by balance teams and failing to find a viable wincon. Anyway, the idea behind this team was to build around Regenerator Stallbreaker Tapu Fini. Mainly I wanted to abuse the effective immunity to status + ability to trap Toxapex and random non-Magic Bounce bulky stuff all in one slot. Additionally, Misty Terrain means you can switch Tapu Fini in to remove Psychic Terrain from things like Tapu Lele, then go Blissey to better tank the attacks (adapt Lele is tuff tho). The rest of the team is just filling in slots for the most part. SkarmBliss is broken and pretty much brainlessly blank checks physical/special setup mons and Hippowdon makes sure that Victini doesn't 6-0 from lead :]. The Mandibuzz...Honestly, I'm not sure what that does but it ppstalls fire-types or something so I kept it LOL. Feel free to use this on the ladder and/or use some of the ideas to build your own better team!
Last edited: Oct 2, 2021

Moderator
Friendly reminder that one liners are discouraged and will be deleted. I left some up as examples of what not to do and also if they already had a reply.

dropping off an great defensive core/backbone

These three mons pair together very well, enabling you to pivot with ease. You can opt for more defense on the corviknight because this is just from a team i've been using. Quagsire can eat at least 1 phsyical attack from most attackers in the metagame and shut down setup sweepers with prankster haze. Shadow ball is extremely good on blissey against the common threats of gengar and blacephalon. Regenerator+ Natural cure also absorbs status for the team which is massive in a metagame with no guard hypnosis. Delta stream corv is just a very solid pivot and defogger. Overall, this core is extremely good but don't use it on stall teams (please).

Hustle No Guard Golurk is hillarious

Please correct me if I'm wrong, but the opposing team shouldn't be able to have double prankster and double triage?
https://replay.pokemonshowdown.com/gen8multibility-1428153299

Lewi11 said:
Please correct me if I'm wrong, but the opposing team shouldn't be able to have double prankster and double triage?
https://replay.pokemonshowdown.com/gen8multibility-1428153299

The clause you just posted explains word for word why the replay you posted is legal.

Lewi11 said:
Please correct me if I'm wrong, but the opposing team shouldn't be able to have double prankster and double triage?
https://replay.pokemonshowdown.com/gen8multibility-1428153299

Thank you all for replying so quick! Thank you for the clarification.

Although I've got to admit, Regenerator is literally everywhere. Maybe restricting it to just one mon can have it on a team? It's mindless switching that's ruining it for me.

Garchomp @ Regenerator
Ability: Rough Skin
EVs: 248 HP / 92 Def / 168 Spe
Jolly Nature
- Earthquake
- Stealth Rock
- Protect
- Toxic
Thoughts on this set I came up with? I EV'd it to outspeed base 90 mons, but I'm not sure if I should either go max speed or invest less in it. Either way, it fills mostly the same role Tankchomp does normally, punishing physical attackers for existing and throwing down rocks and stuff, but with the added benefit of Regenerator giving it pretty reliable recovery

Guys, am I doing something wrong? 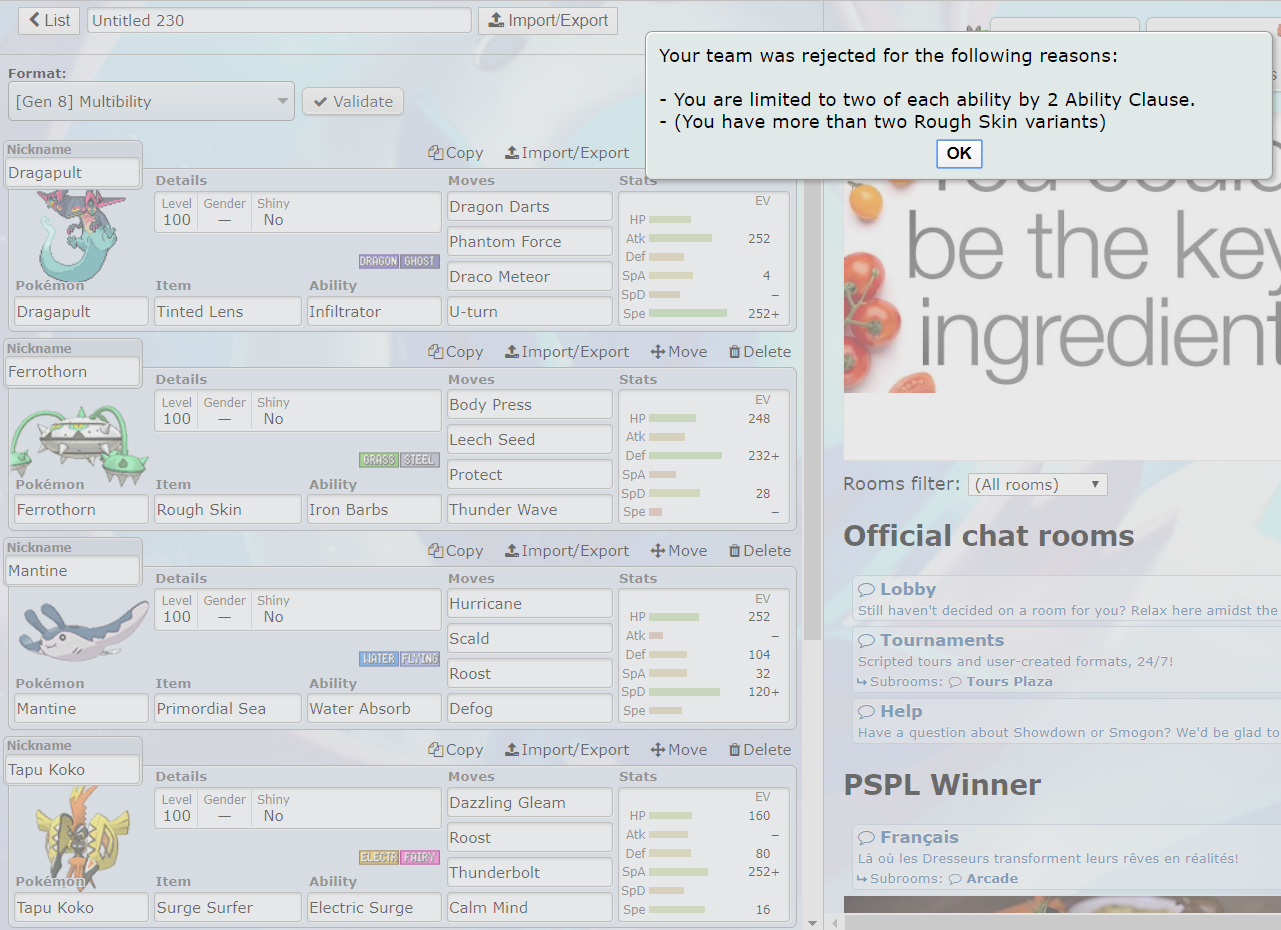 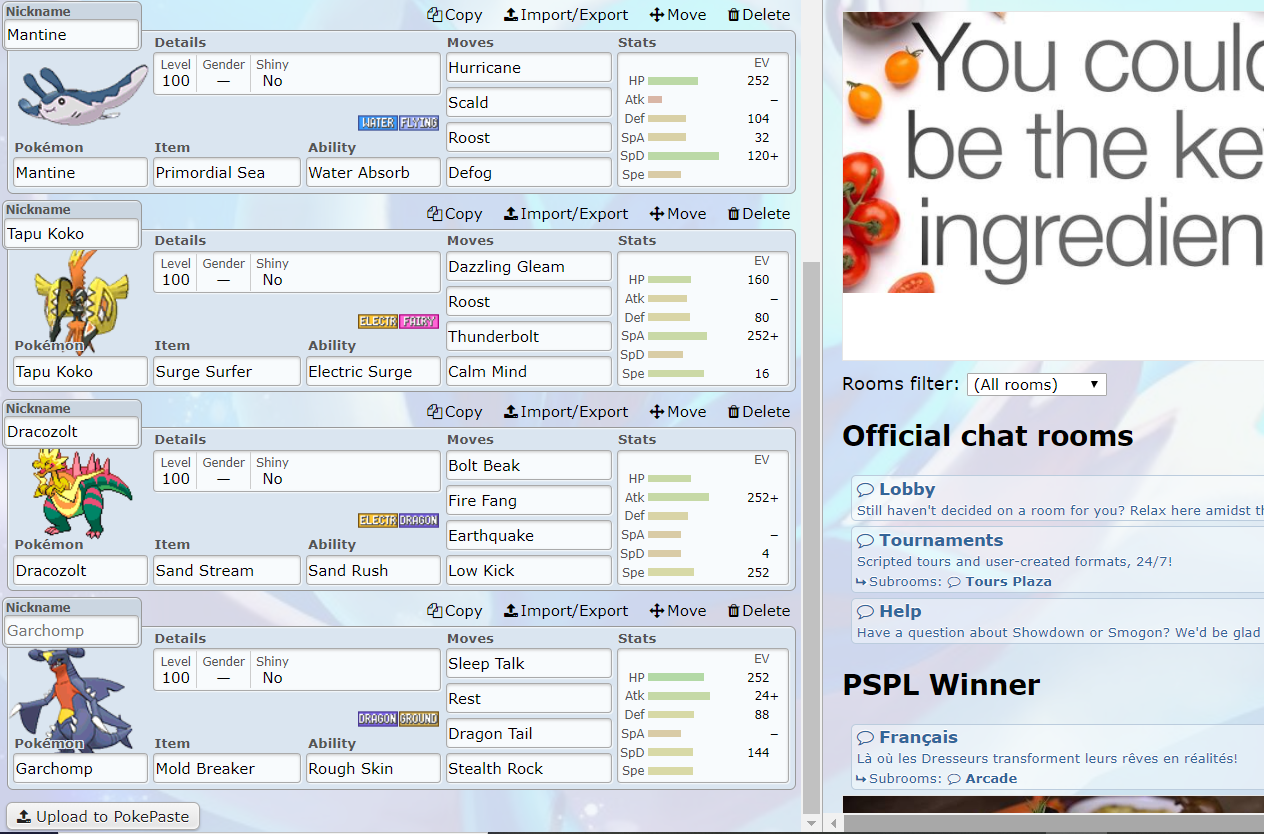 I can't get it to work, this is the team, but I have two rough skin users so it should be legal, no? :(

Rough Skin and Iron Barbs are the same ability, so you effectively have 3 Rough Skin users

Instant access to speed doubling abilities has been and never will be balanced. I'm more surprised than anything that they weren't quickbanned from the meta's inception. Venusaur is the main offender, but as I show in the latter replays, Beartic is also a viable weather sweeper/wallbreaker.

but yeah plz quickban this stuff it's degenerate af

Thanks for making that clear.

To not make this a one-liner

Pangoro @ Triage
Ability: Mold Breaker
EVs: 252 Atk / 4 SpD / 252 Spe
Adamant Nature
- Swords Dance
- Drain Punch
- Darkest Lariat
- Iron Head
Hawlucha @ Triage
Ability: Mold Breaker
EVs: 64 HP / 252 Atk / 192 Spe
Jolly Nature
- Drain Punch
- Swords Dance
- Brave Bird
- Roost
These 2 are pretty good choices for priority abusers with Triage+Mold Breaker that bypasses QM/Dazzling that otherwise would block Drain Punch. They are also the only Fully Evolved Pokemon to get the combo of Mold Breaker+Drain Punch. What also seperates them from other Triage users like Buzzwole is access to Sword Dance and other traits.
Pangoro’s offensive typing lets it hit Ghost super effectively and hit Poison types like Toxapex with neutral coverage, something Buzzwole can only hit with non-STABs and only with bulk up and beast boost atk increases. Hawlucha is also able to hit Ghost and Poison types without much issue and it’s also able to outspeed the likes of Gengar/Froslass, although at the cost of an Adamant nature.
Some other Sword Dance+Drain Punch (additionally Nasty Plot+Giga Drain) users you can use;

Third fastest and has Regenerator for extra longevity

Has Dry Skin and Gunk Shot too

Also a classic, but with Horn Leech instead of Drain Punch. It also has the benefit of keeping Grassy Terrain in this meta, which also means removing Psychic Terrain (but not QM/Dazzline. Also I still would rather use Zarude with Grassy Surge instead honestly because of U-turn being that good)

I couldn't do better in terms of performance, but this tier is very fun
I hope the meta will be more playable without the few annoying formerly bans :3
(and thx to the devs for the work they do)

This set is completely wall by Heatran Levitate but it ensures a good maintenance of the match against Toxapex and Corviknight / Celesteela with Volt Absorb and has sufficient bulk to be 2HKO by Urshifu Adaptability.

After a SD, it can just annihilate any pokemon that doesn't have a solid bulk and Beat Up is seen as a great option at the start of the match.
And we can even try to play it Adamant to be more sure of an OS on Clefable / Toxapex.

A rather funny set which with a minimum of bulk can last long enough thanks to Draining Kiss.
Last edited: Oct 3, 2021
You must log in or register to reply here.
Share:
Reddit Pinterest Tumblr WhatsApp Email Link

Users Who Are Viewing This Thread (Users: 4, Guests: 2)