SM OU New team, tested a fair bit on ladder but not sure if it's any good or not

I'm new to OU (I mostly play Ubers), so I don't really know what's good other than what the Smogon Dex tells me. This team was made based on that and some experience and testing. Let's get into the team:

Here is the strongest pokemon in OU. It's held back by just one thing; its speed. There are only a small subset of pokemon that can stop it once boosted - multiple Intimidate switch-ins and uses of Memento to unboost it, or those pokemon that both resist dark or are insanely tanky AND either are faster or resist fairy AND can OHKO me back. Not that those don't exist - I've had Mawile die while boosted - but it can frequently tear through teams. Its one vulnerability is that because I have SD it's limited in coverage, and it can get killed while boosting, especially since I don't have enough experience with the meta to know which mons have coverage moves that can kill me on my SD turn. It also feels sometimes like I live and die with Mawile, and that I can't win without Mawile taking out at least one or two mons.

Before I had Excadrill this used to be my setter and dedicated lead, but it never seemed to be very good at it, cause of all the leadoffs out there with STAB Earthquakes. It feels much more powerful now that I can use it to selectively counter the mons that are stopped by its great defensive typing, which I feel like I was never using properly before. I sometimes wonder if I have the right set, though, cause I never seem to be in situations where I can usefully trap a mon, especially since Magma Storm always seems to miss when I need it to hit (which is part of why I cut Tornadus-T). On top of that, situations for it to use the Z-Crystal seem very limited. That said, I'm not sure who else I'd give the Z-Crystal to, and it is very useful on Heatran in that it does bust through things like Gliscor or Tangrowth in one hit a fair bit.

I can describe the purpose on Rotom on my team in one word: Value. This mon can come in and get some critical chip damage with Pain Split, it spreads burn like a champ, it fills critical defensive holes in my team, and no one seems to expect that Hydro Pump to deal as much damage as it does. The pivoting and soft-recovery aspects are critical to it being able to do all of those things throughout the match, too. My one regret about Rotom is that despite not really being a defensive mon, it can never seem to really take a huge chunk out of anything or get an OHKO. It does so many small things it can't really do any big things. However, I'll never get tired of switching it into an Earthquake for Heatran, Excadrill or Mawile. I used to have Toxapex here, but since Heatran can now run Toxic, I feel like this is better because Pex can get killed by boosted Earthquakes and this can't. Pex also has less offensive presence.

My new dedicated setter and lead, replacing Magearna which had started to feel redundant with Mawile. I feel like Excadrill, beyond freeing up Heatran to use its offensive and defensive capabilities to the fullest, is also way better at doing what Heatran used to do. It being a spinner on a team with no Rock-weak mons means Rotom can run Pain Split over Defog without fear, and Rock Tomb is crippling against hyper offense teams that always seem to lead with a setter that I can kill easily or a fast setup sweeper that I can shut down with Rock Tomb and still get my rocks up because of Sash and the fact that after a Rock Tomb I outspeed almost everything. Earthquake is as good as it is on every other mon that runs it, ensuring that opposing suicide leads are reliably 2HKOed through Sash and their work undone by Rapid Spin. And the best part is that Excadrill can take a hit even without Sash, so fairly often it can kill the opponent's suicide lead, Spin, and STILL be able to get rocks up before dying.

I originally had Tangrowth and Tornadus-T in the last two slots, but the Regenerator-core approach never seemed to work very well. I felt like it would be nice to have the same combination of a defensive Grass-type and an offensive Flying-type, but decided I was willing to sacrifice the Regenerator thing (especially with Toxapex gone) in order to make both of those mons better. Unlike Tangrowth, Bulu feels like it can actually kill things, without sacrificing too much of Tangrowth's tankiness. It also puts up Grassy Terrain, which is great to have generally but also enables my replacement Flying-type sweeper, Hawlucha.

Well, if I wanted to shake things up, I succeeded. Hawlucha is the polar opposite of Tornadus-T in terms of being a Flying-type sweeper. Tornadus is mercurial and unreliable while it's in, always seeming to miss Hurricanes at critical junctures and somehow getting outsped and killed when I try to U-turn out. I also didn't need the Knock Off any more because due to it changing sets, Mawile now carries it. For all of that, Tornadus was very reliable in being able to come back over and over throughout a battle, healing with Regenerator. I do miss that aspect somewhat with Hawlucha, which is, like I said, the polar opposite: It comes in ONCE, only can do so when Grassy Terrain is up, and then becomes next to useless if you ever switch it out. Its advantage over Tornadus is its incredible reliability when it IS on the field of battle; sure, High Jump Kick is swingy, but I've yet to lose a game to it, and Acrobatics is extremely reliable. Because you can easily switch Hawlucha into a lot of Bulu's counters, it frequently is able to force enemy mons out and get a free turn to SD, much more reliably than Mawile can. Once boosted, it isn't the god-slaying horror that Mawile is, but it's still incredibly powerful and has plenty enough coverage with its dual STABs to sweep a team with no counters. On the other hand, it becomes useless when switching out, so if the opponent does have a counter, it's easily able to neutralize Hawlucha. This means that both Tapu Bulu AND Hawlucha have to outlast any counters to Hawlucha the opponent may have to make this sweep work. Luckily, there are few such counters, though more than there are for, say, Mawile.


So that's my team. It's undergone considerable changes through all the testing of it I've done, and I feel like it's as good as my inexperienced self can make it. I'm not sure how I'd improve it further, but that's why I'm posting it here. If any of you has any recommendations, they would be greatly appreciated. Thank you very much for taking the time to read all of those walls of text, and I hope you have a great day!

Howdy! I'm just throwing my 2 cents in here. (There are a lot of changes I made to this team. TL;DR will be in bold text.)

I can see why you chose Mawile-Mega. After mega evolving, you have a Pokemon with a whopping unboosted 678 attack if you include Huge Power. The only thing I don't like about this set are two of the moves. I will share my set below.

Sucker Punch could be used over Knock Off, but I prefer removing my opponent's items. Besides, you've got two (three if you include Excadrill) speedy Pokemon after changes. Thunder Punch is to take down Toxapex, which would otherwise annoy this team. (But then again, you've got Rotom-W, but it only carries volt switch.)

Here's Heatran, the third Steel-type on this team. Personally, I think three Steel-types are a bit too much. If you want a special attacker AND a faster Pokemon, I present to you: Volcarona.

Quiver Dance is your setup move; it is best to use it when you predict that the opponent is going to switch. I chose Fiery Dance over Fire Blast for the increased accurary and the possible SpA boost. Bug Buzz is the STAB Bug-type move of this Pokemon. Lastly, Psychic is to give your team a good Psychic-type move. You should ONLY use Psychium Z when all Dark-types are eliminated, just in case they predict your Z-move. (It's unlikely, as you carry Bug Buzz, but it is possible if you use Psychic beforehand.)

I'd leave this Pokemon be, save for the EVs. I used 252 HP/126 Atk/4 SpA/126 SpD to make this Pokemon as bulky as possible. A Bold or Calm nature would also do well, because this is not an offensive moveset.

This Mon could use some change. First of all, there is the possibility that it survived after setting up, and that Bulu set up Grassy Surge. Because of Grassy Surge, Earthquake is weakened. Your other moves are fine, but I'd change Earthquake to Drill Run for the crit ratio. Also, I changed the EVs to 4 HP/252 Atk/252 Spe

I left this one alone for now.

Note: I am no expert on competitive battling, I'm just tossing my 2 cents. 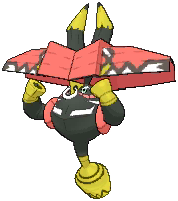 (couldn't find a back sprite)