Approved by Hikari; CP'd from my previous hosted edition and stole certain things from r0ady's edition

Banner done by Accelgor ​
What is this?:
The Next Best Thing is a project where the community digs through a featured Pokemon's movepool and crafts novel sets under the objective of beating some of its common checks and counters. Through this project in the past, relatively hidden Pokemon sets between ADV and BW like SD Lucario in DPP OU or Sub-Disable Gengar in BW OU have ended up taking the respective metagames by storm. More recently in XY UU, Pursuit-trapping Mega Aerodactyl and SubCM Chandelure became very popular options as a result of this project, courtesy of UUsers Sage of the 6 and Calloflochie. Not every set that the community comes up in the project with will become metagame defining, however. In fact, a mass majority of new Pokemon sets made here won't end up becoming very popular in the end, which is okay.

The Process:
Each week, I will choose a different Pokemon, sometimes chosen by random, sometimes chosen by curiosity, of which participants will try to personally create a new set for that is not already on-site or in the process of being put on-site. Participants will be given 5 days to create their set, with discussion about the particular sets being promoted throughout, and on the 6th and 7th day of the week, a vote will be held to choose which user's set represented the most creative and simultaneously competitively viable set to utilize in the current UU metagame. Once the votes are tallied and a winner is crowned, the set will be archived in the OP and the process will start all over again for the next Pokemon specimen.

What are we looking for?:
Specifically, I want to stress the importance of the balance between creativity and viability when picking a set to post for the Pokemon in question. There's a very fine line between a "creative" set and a "gimmick", and this project is not meant to produce gimmicks, rather emphasize the ability to think outside the box when using a specific Pokemon in order to maximize it's potential. Having said that, I would also like to deviate from simple one move / item changes. For example, using Lum Berry over Life Orb on an SD Virizion does nothing to show any untapped potential Virizion has because we already have a basic understanding of what SD Virizion is and does, it's just now better at dealing with status and has less power. The same goes for using Iron Head over Stone Edge on SD Cobalion, it doesn't yield productive discussion or results for the project. I am looking for sets that test what we think we know about checks or counters, so-called standards, and what it means to be viable. Maybe a particular option for a Pokemon looks inferior at first glance for that particular Pokemon, but dig deeper and try and find what it might mean in the big picture, for the entire team.​
IMPORTANT RULES:

Final Words before I commence this: 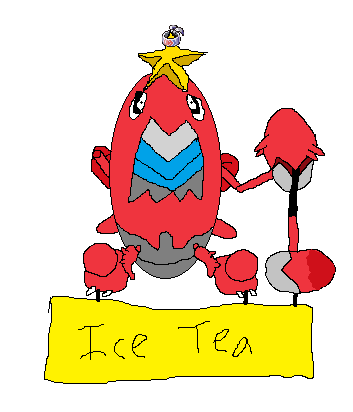 A set I've been running a lot during the Crawdaunt suspect meta. It works very well to cripple it's common switch-ins such as Tangrowth, Chesnaught, Alomomola among others. Obviously Choice Band lets it hit very hard and works in tandem with Switcheroo! Crunch can be used over Knock Off if you don't want to knock off the tricked Item but the power loss is quite noticeable. While Switcheroo+Knock Off might seem a bit weird its sole purpose is to cripple its checks and then Spam Crabhammer because the switchins are most likely not being able to heal up because they're locked :D! This sets works very well with Mega-Sharpedo and DD Gatr/Gyara because it cripples their checks and counters aswell.

Hi, so this is a Cresselia set I use a lot on offensive teams. Colbur Berry + T-Wave is honestly just awesome for catching things like Hydreigon, Crawdaunt, Mega Sharpedo, and Mega Houndoom which are often problems for many teams. Lunar Dance is nice for said offensive teams that this set if often on since it supports it's teammates even further, which is just incredible. You're probably wondering, "Why not use Moonblast?" 1) you miss Thunder wave which is the best move in the game 2) You're fodder for Gyarados which is honestly terrible 3) You're forced to drop something and this set just compresses so many roles that make is such a good set to use.

This set looks to surprise most Celebi faster checks, like Mega Aerodactyl, Mega Beedrill, Crobat and Tornadus, some scarfers like Darmanitan, while overwhelming (almost) anything under the base 100 speed tier. Sucker Punch is the key over here, picking the aforementioned threats that expect an SD/BP set. Hmm I dont know what else I could add to this, but it is important to note that you are still open to threats like Hydreigon, Mega Houndoom or Infernape, and can't do much against fat steels like Mega Aggron/Mega Steelix.

Conkeldurr @ Leftovers
Ability: Iron Fist
EVs: 152 HP / 108 Atk / 248 SpD
Adamant Nature
- Substitute
- Focus Punch
- Knock Off
- Thunder Punch / Ice Punch
SubPunch + Iron Fist Conkeldurr is a really fun Pokémon to use since it can defeat a lot of Defensive Cores without much efforts. Thunder Punch + Knock Off is the best coverage choice imo, since you can hit Ghost- and Psychic-Types while you can still hit stuff like Gyarados and Crobat. Alternatively, you can run Ice Punch to hit Salamence too. This EV Spread will able Conkeldurr's Substitute to resist one Scald from Defensive Suicune, what is very useful sometimes. Leftovers may help Conkeldurr to survive more time and is a mandatory Item since you have Substitute.

This is a really nifty tech I've used in the past (should really only be considered on HO teams) that paves the way for another, potentially slower, member of your team to wreak havoc. Aerodactyl's great speed tier, especially after mega evolving, almost always allows it to get up a Tailwind on anything that you can't break late game. I realize that most people would prefer to instead whittle down at opposing mons that Aero can't break through, but I've personally found that Tailwind applies more pressure to those situations in general, and after all it depends on the situation at hand and on the position you'd be in at the time. The rest of the moves listed are fairly standard and can vary based on the teammates you choose to run alongside Aerodactyl.

Basically your aim is to slow down Craw's faster checks so that you can deal with them more easily. Of course you'll be using Adamant Crawdaunt when using Rock Tomb, but can go either way in regards to Icy Wind. An Adamant nature might seem a little counterproductive when used with Icy Wind, but it's main purpose isn't to nab KOs anyways (you can run Naughty if you want to whittle away at say, Hydreigon more quickly). Rest of the moves as well as the spread are standard.
Last edited: Jun 14, 2016

The aim is the catch people off guard and grab kills that suppose to counter(!) or check crawdaunt. Pretty self-explanatory set

This set is really fun, thanks to the combo endure + custap berry can intimidate faster threats such as mega Sceptile, Salamence, and also its hard check as Sylveon, Cobalion and mega Aero, this set is really unexpected, and it becomes devastating against offense builds, i put Superpower to hit better Hydreigon and Cobalion mainly, and Icy wind to hit better Salamence, mega Scep I hope you like it ^^

Tauntdaunt is definitely my favorite Daunt set, as it shuts down most of it's defensive checks, and can give a free switch-in to other powerful wallbreakers by locking Tangrowth into Giga Drain, for example. Can also shut down mons like Salamence and Gyara who might try to force it out to get a free set-up opportunity with Intimidate.

Crawdaunt @ Choice Band
Ability: Adaptability
EVs: 252 Atk / 4 SpD / 252 Spe
Jolly Nature
- Knock Off / Crunch
- Crabhammer
- Aqua Jet
- Switcheroo​
A set I've been running a lot during the Crawdaunt suspect meta. It works very well to cripple it's common switch-ins such as Tangrowth, Chesnaught, Alomomola among others. Obviously Choice Band lets it hit very hard and works in tandem with Switcheroo! Crunch can be used over Knock Off if you don't want to knock off the tricked Item but the power loss is quite noticeable. While Switcheroo+Knock Off might seem a bit weird its sole purpose is to cripple its checks and then Spam Crabhammer because the switchins are most likely not being able to heal up because they're locked :D! This sets works very well with Mega-Sharpedo and DD Gatr/Gyara because it cripples their checks and counters aswell.
Here's an example on what team it should be used or considered:

Malin said:
i just wanna say it is winter edition for my side of the globe
Click to expand...

Lacks the severe power it usually holds but in return it puts its usual checks and switchins like bulky grasses on a timer, particularly tangrowth and chesnaught as they won't like toxic since it can effectively wear them down. Along with alomomola too as it can toxic and basically dragon dance up without much fear due to lum. Hydreigon, whimsicott won't like a toxic nor switching in too many times as it also puts them on a timer. Dragon dance is for speed control in some way but notice that this set lacks priority which is unfortunate.

This is actually a really decent lure for only two counters the traditional SD Crawdaunt set has(no item Tangrowth/Chesnaught). This set basically trades taking out those two for not being able to perform versus Alo at all on stall. To account for this I've slashed Swords Dance with Aqua Jet, if you're running SD and Sludge Wave then, you basically have a one mon answer to stall barring Crabhammer misses and/or hax of some sort. Though of course no priority means you perform terribly versus offense, decisions decisions!

does this still work