Choice Band makes Bewear a total monster, allowing it to OHKO the vast majority of opponents with its 120 BP STABs and good coverage moves.

in as magicarpe_lvlCLC2 for 1v1

Reached Silver in 1v1. EDIT: Now Gold in Mix and Mega.
I'm using Fightinum Z Bewear myself. It's working out pretty well... A hot tip for all of you on this challenge; run some speed on Bewear; it will help with more defensive threats. At the very least, aim for outspeeding Umbreon...

I might get Gold in 1v1 if my guesses are spot-on for a while, but I doubt I'm good enough to seize Platinum. Mix and Mega, on the other hand, should be relatively simple, as long as I don't run into a specific threat too much...
Last edited: Jan 10, 2017 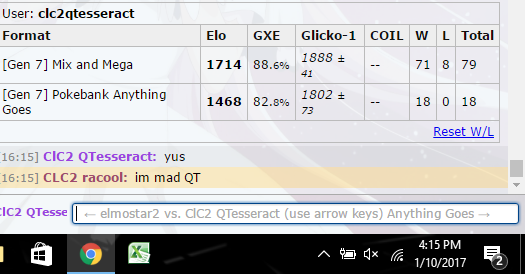 its ok QT, ive since moved on to bigger and better losses, and have gone from being 43 away from platinum to 164 away:)

yeah i don't know how either tbh

Took too long, but hit Gold in AG.

Despite some miserable losses and multiple falls in the ladder, platinum has been achieved in mnm:)

S/O to Zephyr Dragon Lord for ghosting providing mental support to help me cross that stupid 1700 line on like the 5th try;P
also to Eien, for my final win
and to Fardin for being there when it happened, and for stupidly believing that I am a better competitive battler than QT ;P
E: s/o to Quantum Tesseract for being one of the few people on the ladder who wins with hax and gloats every time actually hates winning with hax and will actually try and make up for it:) Although I am glad i was able to get platinum myself tbh
Last edited: Jan 11, 2017

In as CLChOMpdeo for MnM

Silver for AG, will get better later.

Got bronze in 1v1

PLATNIUM. Mix and Mega. I've done it. I'll be sharing the team momentarily. But first... my list of shoutouts.

-Shoutout to Quantum Tesseract for beating me a few times.
-Shoutout to Racool for cheering me on.
-Shoutout to M'joe'ra for making sure my team was good, and that one dude that shadowed mentioning a Fairy type... and then not seeing a Mandibuzz again
-Shoutout to Awesome Games Done Quick. You people are cool, even in the background. #notanad

As for the team itself... it's what I used in the back half of this CLC challenge.
Yearly Greetings: A CLC team

I made this team in order to prove that the ladder can be topped with non-broken things, and as a self-appeal. By the nice record that happened, I can safely say that I've succeeded.

Keldeo and Garchomp are both here because the CLC needs them there. While they do not compliment each other defensively, even disregarding fairies, they form a great offensive core, being able to smash an unprepared team on their own. Keldeo is named after Durza in order to taunt him, and Garchomp was named... after my past, where I had quite the vendetta against it, thanks to this site (and Tyranitar... who was a dastard in Generations 5 and 4)

Cobalion is named after Leafstorm, an offensive player who is skilled in Mix and Mega, and hates stall. This is a carbon copy of his Cobalion, except without Substitute. As for why I chose Cobalion, it is the first thing that came to mind when making this team.

Togekiss was a decision made in a panic after trying to mend the team after a nasty string of losses. Deoxys-Speed was once here to give Fardin nightmares, but it was bad against offensive teams, so it needed to be replaced, and I even managed to STILL make it mean to stall. Togekiss fits in beautifully to the team, taking on. and even OHKOing Tapu Koko with Flamethrower. It serves as a very nice special wall for this team, managing to take on most Special Red Orb users. Named after the sign that this team got better.

Griatina-Origin serves as my Defogger, and my Primal Groudon counter. It does well against the behemoth, excluding those that pack Dragon Claw. It's hardly passive too; both Hex and Dragon Pulse do good damage, and Will-O-Wisp messes up the days of many sweepers. It also manages to be a perfect Katarna wall. Named after the fact that it lives in the Distortion World.

Solgaleo serves as my primary physical tank, and as a two part check to Dragonite, along with a much better check to the other Aerilate Extreme Speed users. Solgaleo is incredibly bulky in general, meaning that very little will OHKO it. Named with the mind that metallic sun might be in the future.
Last edited: Jan 13, 2017

Update: Was just 5 short from Gold and kept losing after that dem

In as clc leafage for AG !

CLC DarkFlames64 for 1v1 will probs tilt out but lets see!