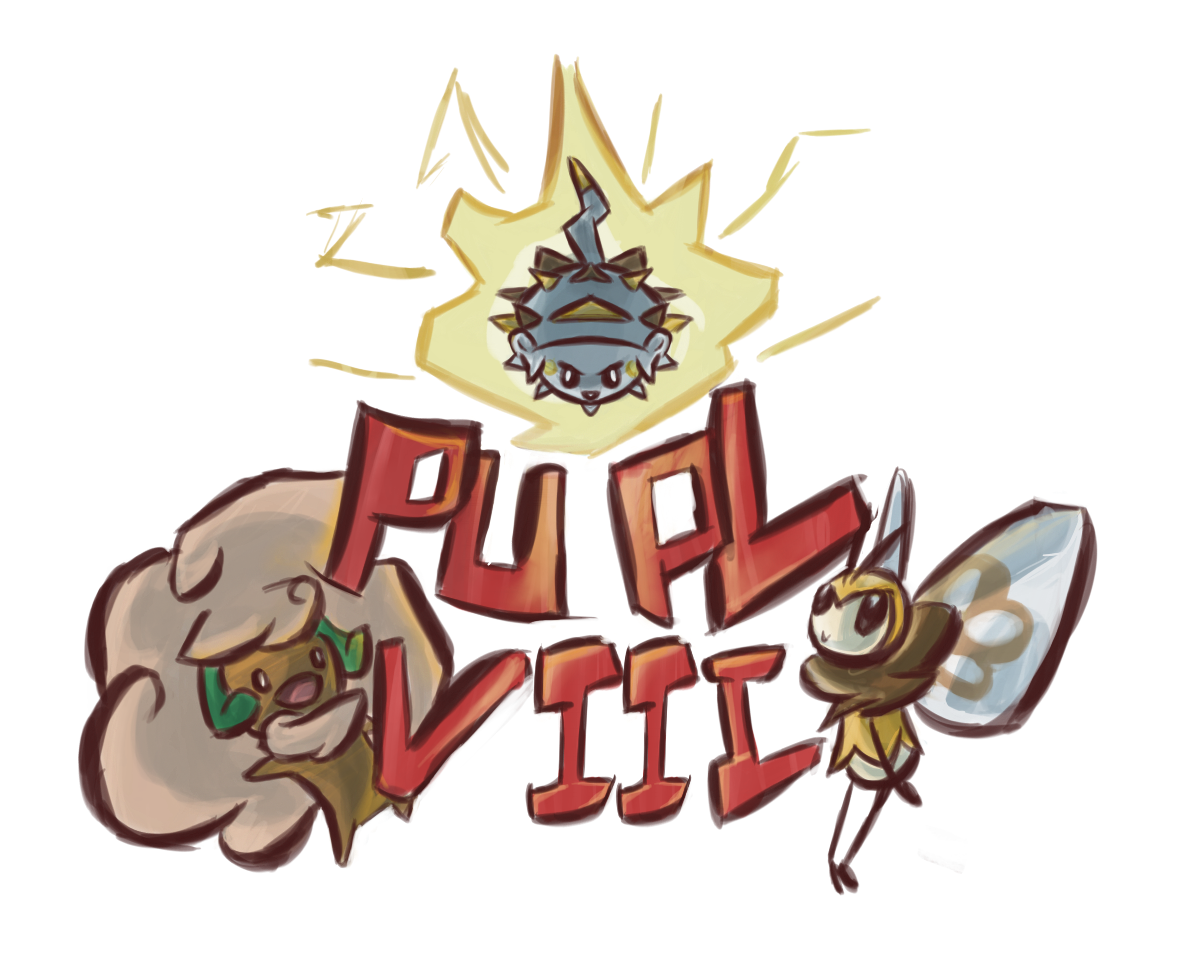 With the highly close playoff race wrapped up, it's time for the customary team and set dump thread. It's always great to see techs made throughout the tour even if they didn't see action. And of course, seeing how old generations get new trends. Feel free to share your favorites below!

2HKO's Quag on the switch in + OHKO's Gigalith at +2. Body Slam can't para or OHKO Ribombee who 2HKOs you at +1. Can also take out a weakened Doublade thanks to the Ghost immunity. Why fish to hit twice when you can use a STAB 144 BP move

Sing Eldegoss to hit other Eldegoss and incapacitate them for TSPikes strategies. Also good for Ferro/Trevenant/Tangela and still doing its primary duty of unpunishingly fishing for free turns vs. SD Doublade thanks to No Guard

The only SR-resistant Silvally form in the tier. Flamethrower can be anything you need covered but a variant that can hit Doublade is probably the most splashable rn

Faster than Doublade and 2HKO Quagsire with Ice Beam. Used it alongside Vanilluxe + Gigalith while also remaining relatively sturdy in checking the ice cream itself. Wish it got Freeze-Dry though

4th move kinda meh on Frosmoth might as well give it mid-game utility in matches where it can't sweep - like checking Vanilluxe and opposing Frosmoth in a pinch (STAB U-turn btw)
Last edited: Aug 16, 2022

Hello everyone, we couldn't qualify to playoffs so the time has come for me to share what I've used throughout the season, so here we go !

Thought I would play SS the whole tour and got surprised being in SM week 1, so I picked something I built for a series that TJ played 2 years ago in circuit playoffs (he won with it), so I was confident in the potential of this.

We ended up changing the line up and I left the SM slot to go back to current, and I had no idea of what I wanted to bring, so I tried to find some cool techs that could shine with the recent drop of doublade and guzzlord. The idea was to lure doublade/regirock/other aggron with a slow af aggron and metal burst + chople berry to make sneasel and ribombee (which is spd, it can set up on a zard switching in if you qd the turn he switches) being huge threats in late game. To complete this I had spikes and a zard that can roar on togedemaru to prevent it to heal. Lily brought a rly cool team too so if you haven't checked the game I strongly recommend you to do so cuz it was rly funny.

Week 2 was the week where all the sand teams with lith sandslash wishi + 3 became really popular and won a lot, so shane deciced to make one with a surprise factor which was centiskorch, and it put a lot of work during the game.

After scouting I saw that their specs whimsi resist weren't rly great, so I added roar zard again with tspikes and sneasel. After looking at it back, I regret I finished the build 5 mins before the game on phone so I haven't made a good rhydon spread (outspeeding the lurantis would have helped me a lot), but it's what it is.

I didn't have a lot of time to build bcs of holidays this week, so I scouted quickly and saw that the core ghost vally scyth worked pretty well. As TJ was playing grand slam playoffs, the team and I thought he wouldn't prep too much since he was focused on something else, so we kinda ct'd what he was used to bring (I actually just put the same 4 mons as the precedent week with better spreads)

Was supposed to play Lady Writer, but Luthier subbed in, and finally sunday at midnight sasha subbed in. Saw that banded polt worked rly well
against their scout, so I tried to build around arch to turn on grounds and trev with trick to help against stall, but I faced ho so it wasn't rly helpful. I don't recommend to use this, no steel + no removal means it's really bad.

Wanted to play some heat stuff for our potential last week so shane told me to use flapple, and he kinda kept the same idea as week 6 with uturn on rock/grounds + grass, and he ended up with something I found really cool. Unfortunately flapple and focus blast cinc didn't put a lot of work but broken doublade brought it home, that's the essential.

It's all the more sad to go out now that we have performed well in the last weeks, I strongly believe we could have done better after what we have shown lately. I would like to thanks HJAD for trusting me (even if it wasn't a big bet by looking to the price :p) and all my mates, I met really nice people there and I really like prepping and talking with you all. I'm glad I could play all the 7 weeks after the last year edition, and I'm really proud of the record I ended up with. Anyway gl to all the teams still in the running for the win (LFGO HUNTAILS), and see you all in future tours
-Squash

I didn`t play this PUPL but I helped my boy Shuckleking87 (s/o the goat) on the BW slot a bit so these were my contributions.

Shuckleking actually built the team`s skeleton around Simisear but after some few tweaks here and there we wanted a type of specially bulky offensive mon so we could at least take a few hits from threats like Scarf Swanna and Zebstrika which would otherwise be very annoying to deal with. Then I suggested Pain Split Swalot lol but obviously I could come up with something better so I suggested Curse 3 Atk Muk:

Nothing out of the ordinary here, Curse lets you be a threat to many builds while PJab, Ice Punch and Fire Punch are able to cover most of the meta, only rendering it walled by the now uncommon Frillish. It avoids getting 2HKOd by any Scarf Swanna move, easily avoids the 2HKO vs LO Zebstrika and the 3HKO vs Magnet Zebstrika, avoids the 2HKO vs Specs Dark Pulse from Shiftry and the 2HKO vs Scarf Golduck's Hydro Pump, all that while 3HKOing Scraggy letting it beat it (not consistently but the odds are heavily on your side) and just being overall annoying to switch into mainly when accounting the poison chance from PJab and Poison Touch.

Shuckle wanted something with Mime and I built this really quickly. I chose the Specs Mime way because Scarf is weak as shit and just a HWish bot altho pretty predict reliant it can break stuff pretty well, being faster than Monferno is a big deal and given how rare Pursuit users are nowadays Mime has plenty of breathing room to do stuff. I figured Spikes with Specs Mime would be really neat as it oftentimes would allow Mime to avoid having to predict every turn mainly vs teams without Scraggy/Zweilous. The team overall ended up looking like a pretty standard Spikes BO and the funny part is that his opp on that week brought 5/6 same mons. I'm proud of this build tho.

The star of week 7, Scraggies was out by then so Shuckle just wanted to have some fun and if anyone knows what is fun in this tier this is me, PU Volcarona in. This is not the first time Dustox won a PU tour tho, DugZa somehow did it on last year's Classic I believe? Team was also mine but that one was trash so props to Dugza for making it work. Anyways back to this, building with Dustox is fucking impossible, I tried to keep the team as anti-Monferno and psychics as I could and for such an awkward mon to build around this team actually ended up looking solid, the most notable fucked up part of this team tho is how uncapable of breaking opposing Klang it looks, mainly when +6 Dustox is unable to even get close to 3HKOing it with Bug Buzz. This team also features Scarf Stoutland, which is actually tasked to Pursuit-trap Swoobat while still being decently strong and open holes for Dustox later in the game. I chose Scarf Stoutland over something like Sneasel cuz of unpredictability since I at least have never seen anyone else using it and because Sneasel can't actually break anything easily. I chose Stunfisk over Torterra because I really wanted to have rocks up vs a potential Natu while possibilitating me to have a good switch-in to Monferno and possibly crippling it with Static since Dustox doesn't have a good time vs it. This team also has Natu for the important hazard-blocking potential (altho Stunfisk ups vs it still unfort) which is a pivotal piece to make Dustox function. Klang is the team's special glue, nothing else to say, while Swanna serves as another offensive tool capable of checking Scraggy and being a secondary Monferno check. This team ended up being also weak to Duosion due to the lack of a Scraggy on the team or overall offensive pressure but luckily it was not Magic Guard fsr. Dustox had to clutch a 1v2 against a Scarf Gabite locked on Outrage and it fucking chewed the move and started setting up to finish the game. Hope the game served as a message to not sleep on it.

Other ideas that were or were not used:

It threatens basically everything ig? Simple concept prob already used by someone but if not, this set should be tested cuz it shows potential. Losing on bulk obviously sucks but I'd say this is a middle ground between Standard NP Beheeyem and Specs Beheeyem.

Running EQ on Stunfisk means you are sacrificing the potential to trade with opposing Stunfisk so you can solidly achieve a 3HKO on Klang and smash Tentacool. Klang can actually somewhat abuse Stunfisk ground mon as Earth Power can't stop Klang's Rest cycle, that is when EQ comes in, EQ is able to stop that cycle while being able to stop Tentacool trying to spin on your face and both ends having to gamble with Static/Discharge para vs Scald burn (note: even burned EQ does more to Tentacool than EP).

The difference against offensive stuff with equal phys and special bulk is minimal:

I really think this set has serious potential alongside Spikes, I'm not certain if it is better on fatter teams or if I can just toss this shit on Dwebble teams I haven't test this set too much but being relatively tough to kill when awake and even tougher when asleep is kinda sick for a DD user, it appreciates a tier with basically nothing to phaze it out while DTail has normal priority when rolled on a Sleep Talk. Having to rely on Rest in BW is obviously a nuisance tho.
You must log in or register to reply here.
Share:
Reddit Pinterest Tumblr WhatsApp Email Link