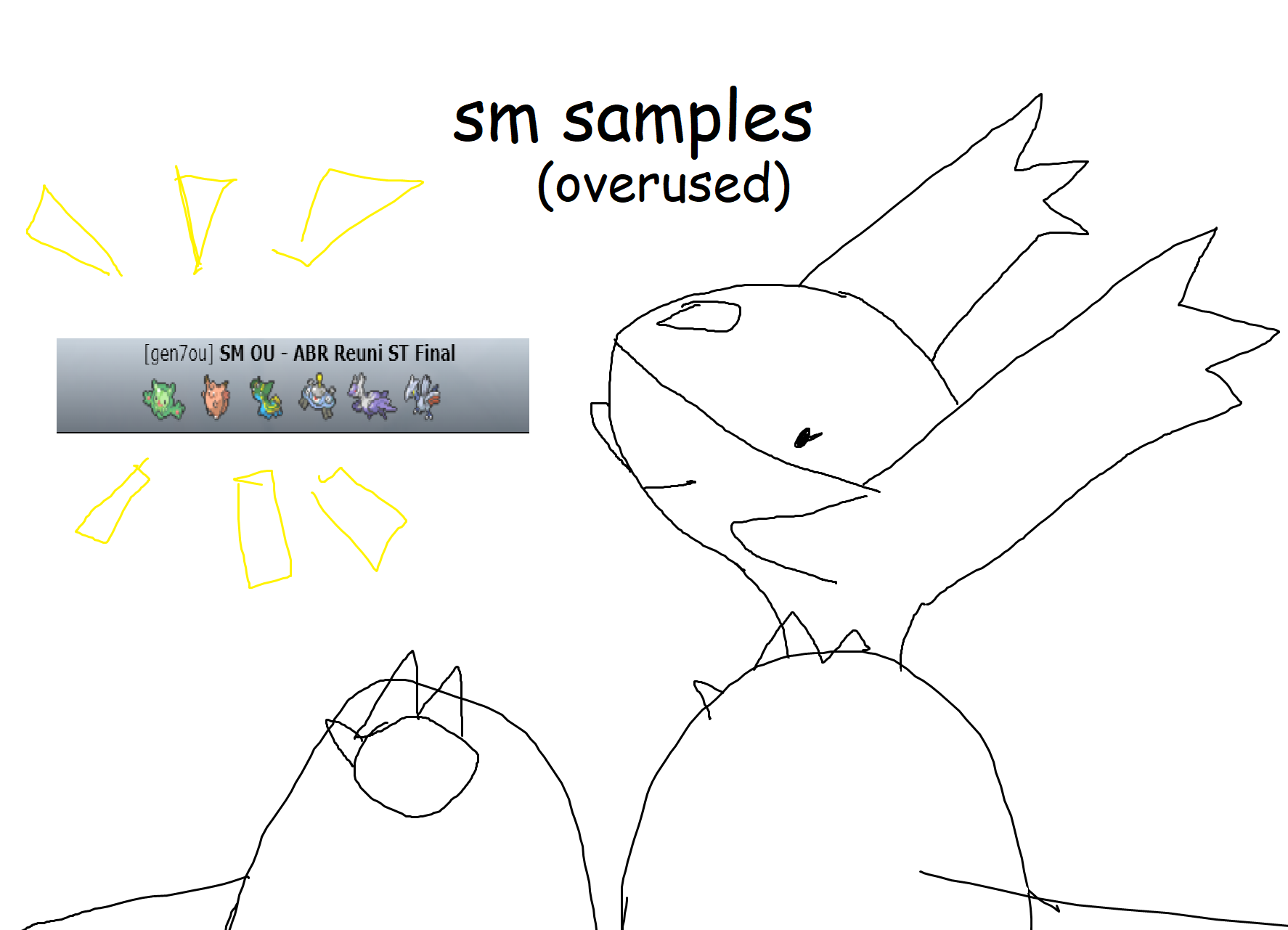 crudely drawn by me and hosted by the sm moderation team!
​
In such a rampant, high-activity metagame filled with an incredibly diverse cast of Pokemon, finding a good place to start can be incredibly difficult. If you are interested in trying the metagame but are unable to build any teams of your own due to inexperience with the metagame, this thread is for you. Bear in mind that the tier is constantly developing, so this thread may see changes over time as the metagame shifts toward one playstyle or another.

If you would like to submit a sample team, you are allowed to do so in this thread; however if you do please explain why your team submission in particular would make for a good sample. This can also mean submitting teams that aren't your own, but please be sure to ask for permission before sharing them publicly. Questions regarding teams will also be fielded in this thread. If you have any further or miscellaneous questions, you may also message the SM moderation team.

Thank you for adding these teams, there are some that are very interesting. I hope there will be more in the future.

Stare into the abyss.

Moderator
Hi! With the end of SPL XIII and SMPL I in its early stages, I'm here to submit some teams for samples based on recent meta developments!

Zard X Double Fire HO [https://pokepast.es/29da9cf705b912a0]
Serperior has been one of the faces of offenses lately. The amount of utility it provides to these team archetypes are incredible and this team takes advantage of it well. Contrary punishing Defog attempts, Taunt + Rocky Helmet breaks down Chansey to open up Volcarona's sweep, and provides Defog support for both Mega Charizard X and Volcarona, while spreading annoying Glares to open up free turns of setup for the team. Offensively, it can threaten the bulky waters, helping the double fire core. Kommo-o provides Taunt support again, further stopping entry hazard attempts as well as shutting down passive pokemon while being a solid setup sweeper in its own right. The team is pretty much a dedicated lead + 5 setup mons, with the aforementioned 4 members dealing and overloading the steel types and spdef walls for CM Leftovers Magearna to potentially clean late-game.

SubSwarm Volc + Vincune Offense [https://pokepast.es/572e78ac85ef7831]
What is worse than having to fight a Suicune? 2 Suicunes! Other than Cresselia's defensive profile by providing a much appreciated ground immunity, its main niche comes from Lunar Dance which gives the team's setup pokemon a 2nd life. Notably to Suicune, which thanks to Pressure, can PP stall even more pokemon like Chansey and Toxapex. Hence, draining all of their PPs allow SubSwarm Volcarona to setup and win games easier. Volcarona is further support by Mega Diancie and utility Serperior again, both of which provides hazard control with Magic Bounce and Defog respectively. Moreover, the former runs a Sub+Endeavor set while the latter carries Taunt+Rocky Helmet, both of which help keep Chansey low. Double dance Magearna rounds out the team as another offensive setup sweeper that can help overlwhelm Heatran. Hence, this team can easily punish the standard fat teams that consist of Mega Lati+Pex+Chansey+Steel.

**The core of Volcarona+utility Serperior+Magearna is seen in even more teams, sometimes supported with Mega Diancie as well, and we've seen this combination in other team variations, such as with the niche Dragonite! (1 2)**

SD Gliscor + Bulkarona Balance [https://pokepast.es/1cdc58de31695641]
The team is built around the setup core of SD Gliscor + bulky Volcarona, the former deals with Heatran and Toxapex while the latter can melt the steel types in return. They are supported by a fat defensive backbone of Mega Sableye+SkarmChans that provides utility, notably Magic Guard + Defog to help alleviate Volcarona and Weavile's Stealth Rock weakness. This allows Volcarona to take advantage of its defensive profile, and by running a bulky variant it can more freely switch into (and potentially punish them with a Flame Body burn) the likes of Kartana, Mega Scizor, and Mega Mawile, which can otherwise destroy the team (Skarmory can kinda phaze them out but can't threaten them in return, and it gets worse when Magnezone is involved). Aside from being a solid speed control, Weavile can Pursuit trap Mega Lati twins to open up SD Gliscor's sweep, as well as a Choice-locked Tapu Lele and Victini which can potentially destroy the team. Moreover, with Mega Sableye running Knock Off, Weavile can afford to run Punishment to cleanly OHKO +6 Manaphy.

Mega Mawile + Wish Chansey Balance [https://pokepast.es/f1238d38fa298574]
Mega Mawile is usually supported by things like voltturn and screens. However, this team takes a more defensive approach with Wish Chansey, providing Mega Mawile with longevity which allows it to trade attacks with the enemy more liberally and thus wallbreak more frequently. Slowbro makes for a niche pick as a solid answer to the likes of Mega Medicham and Hawlucha, and pairs perfectly with Chansey. Kartana runs a unique utility set, being the team's Defogger that matches up well against common Stealth Rock users (Garchomp, Landorus-T, Gliscor, and Ferrothorn), and also offensively check Manaphy and Mega Tyranitar, which Z-Leaf Blade makes easier. Magnezone can run Thunder Wave to slow faster threats for Mega Mawile, or Flash Cannon to immediately threaten Tapu Bulu. But most importantly, it helps remove defensive steel types for Mega Mawile, and thanks to its Choice Scarf can dispose off opposing Kartana to stop it from destroying the team. Hence, this frees up Slowbro's moveslot from running Flamethrower, allowing it to run Future Sight which can help Mega Mawile's wallbreaking potential even further.