Wearing a mask only reveals your true self

Calling act, opponent and I originally scheduled for Wednesday on their wall. Opponent then messaged me on my wall at 3am my time Wednesday wanting to play, I replied later that I can’t play at 3am cuz I sleep then, and that we had to reschedule. Opponent never responded after that. Requesting activity win

Won in a haxy serie, ggs

Dropping out from the tour. Give my opp the win and leave me out of future rounds. Sorry if this makes the pairings weird to do, I’m just burnt out and need a break.

won in 3 vs Pujo
Were some ugly ones, hope we get better games next time :/

My opponent (ForgottenOnes) gave me the win.

Won in 3 vs Mateeus ggs

my opponent gave me the win

won in 3 vs shieldpoke ggs man

we talked on ps and you literally said you would ask for an extension.

I said (I will try to play ) in extension day and Finally I can't.
Don't miss shedules next time , you also told me I could take the win if I couldn't play
Last edited by a moderator: Jan 25, 2021

Rubyblood said:
I said (I will try to play ) in extension day and I finally can't.
Don't miss shedules next time , you also told me I could take the win if I couldn't play
Click to expand...

the original scheduled time was friday at 7pm, which neither of us made. you messaged me yesterday, which was not the scheduled day or time lol. not to mention, you literally did all of this scheduling through PS. there's no ground for you to take an activity win here. this is either an extension (which you are saying you can't do) or a coinflip.
Last edited by a moderator: Jan 25, 2021

it won't change that you can't read and you told me take the win if i couldn't play stop being stupid
let's play wednesday night and be done. 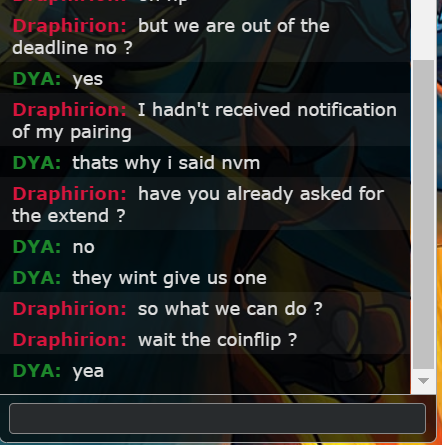