Id like to say an huge thanks to Hogg and Christo for the big chance you 2 have given to me, this meant a lot to me.
Im really happy that i shared this "adventure" with you guys, was really fun, sad for reyscarface and John that didnt show who they really are and what they really know to do.
An huge thanks to non-team members as well that helped me testing/build(Lopunny Kicks, Will of Fire, H.M.N.I.P, MegaStarUniverse sry if i forgot someone)
It was an honor being a Rattler, thank y'all.

Into the New World

I won in a fun game against mr Meru ~n_n~. Big, big shoutouts to Rakan as always and the GOAT RU team checker mr Spirit, I would not have been able to do this well this round had I not ran all my teams by you this phase <3. lgi gliders *_*.

UU Leader
Not going to do individual shout-outs or anything, I think I've talked to all of you guys in person anyhow. Just want to say to my team that you're all fucking kings and you deserve to be in playoffs. I'm sorry we fell short in the end but I'd rather lose with y'all than win with any other team in this mess. Rattlers were a great team and I had a great time with all of you.

Now that we're out, rooting for Bushmasters to take home the trophy. Best of luck to everyone still in this thing.

Never did shoutouts in the past, but definitely want to now.

Hogg: We have been boys from the start, you know whats up.
Chill Shadow: You were the main RU player hogg and I had on our radar. You proved to be an extremely competent Pokemon and RU player and this tour reflected that. You are a great team player and worked really well with Arifeen. I expect more from you in the future.
stax: STAXONSTAX. hogg and I were not as familiar as we should have in DOU, and with the knowledge and research we did we thought you were a great option. You played extremely well and came up clutch in Phase 3. You performed all tour, got unlucky, and played while on the back foot amazingly. I am extremely glad we drafted you - frania was right ALL ALONG.
Bro Kappa: It was hogg's idea to buy you early on, and from what I had seen from you in the past, I was on board from the start. You were our planned "wild card" OU pick and preformed really well. Just based off tests, talking with you, and your performance in this tour, it is clear that you are an extremely intelligent and competent in pokemon player. You will kill it in stour playoffs assuming you qualify. Rooting for you.
Fireburn: When we drafted L56, we asked his opinion on who should Ubers. He recommended you and we thought it was a good idea. You played well and got yourself a pretty decent record. I hope people don't see you as your typical mediocre tier leader(I mean look at hogg, that guy stinks), because you showed to hold your own this tour. Good stuff.
Manipulative: I'm really glad you proved yourself man. Ever since I found out I would be a manager and IronBullet said he wouldn't sign up, I wanted you to be my UUer. No one else showed any interest and people doubted you, but none of that phased me because I knew what you were capable of. From #10 on the power rankings to what should have been a 6-3 record really shut people up. Hope to see you in SPL but know I'm your fucking father.
Rodriblutar: You're the fucking goat bro. 4-4 is not the record you wanted, but you played really well. For someone who has to play on a phone and is busy doing everything, you show how good you are. Hogg and I were set on drafting you for NU from the start. You are one of the best players on this site. We need to start a gofundme to get you a damn computer.
John: Do not let your mediocre record phase you. You are the best SM OU player in my eyes without question. Your record does not reflect your ability, not all tours are going to go your way. Your thought process during your games is incredible and I always admire watching you play. I would draft you again in a heartbeat if I could.
reyscarface: Although this was not the best tour for you in terms of your record, I am not disappointed at all. Similarly to John, not all tours are going to go your way. It is clear you are a fantastic and intelligent player. Keep your head up and kill it in the next tournament you join.
Bushtush: BUSHGANG. I hope to god you get your time to shine in SPL. You are an extremely good player and do really well in a team environment. I'm sorry you didn't get to start in OU and we had to toss you in tiers you have no experience with. You were an extremely integral part of the team and definitely improved as a player in the past couple months.
Arifeen: I'm extremely glad I got to pick you up at the end of the draft. I would have bought you earlier but legit thought you already got drafted. The effort you put into RU prep in unbelievable. CS can definitely confirm how crucial you were to his success. You are a great team builder and equally as impressive player. It is unbelievable that you almost went undrafted. If you had the chance to start I know you would have done phenomenally. I highly recommend drafting Arifeen for RU @ SPL managers.
Liones: You were quiet for most of the tour, but fulfilled your role as a Sub when we needed you. Although you were quiet, you were active and ready whenever we needed you. Great win and hope to see more from you in the future.
Kiyo: You were also pretty quiet but fulfilled your role as a sub too. You did what we needed you for but it was a shame you were at work when Rodri couldn't play because he was busy fucking 3 girls at once or something.

Special shoutout to GOAO. Not going to pretend there are no hard feelings, you are definitely a dick. You played pretty badly all things considered and showed how insecure you are. You will probably regret what you did later on, but maybe not in the near future because you are 12 or something.
Last edited: Oct 22, 2017

i somehow went 3-0 this phase, ggggd

sorry to my team for fucking up some of my games and perhaps not being the most balanced chat presence; kinda fucked around a lot in chat but i do wanna say that i'm really annoyed about some of the mistakes i made. thanks to my managers for drafting me, teamed up with some of you guys before and was glad to do it again. just looked at our lineup again and damn it's a real shame we didn't make it, but it was a really enjoyable ride regardless.

i guess it's SPL for me now (or maybe not if LC's not in it, who knows), peace

oh and i guess the nagas are happy about this

Went out to get wavy last night and somehow ran into some of my teammates bop. 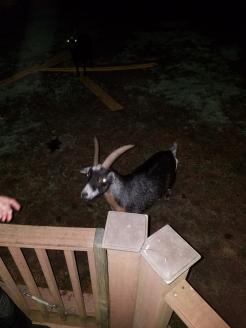 Hikari: ok now ggggd remember to be just as shit vs blarajan

In order to generate more hype, Void and I have re-scheduled for next Saturday at Noon EST, so we can have more people watching. Is she happy or sad? I can't rly tell

Was a fun season, thanks Hikari and Leru for drafting me and giving me a chance. I'm happy with the results I put up and happy that we stayed in it til the last minute.
Big thank yous to MajorBowman , Kaori , Memoric , and talkingtree among others for helping me build and test in basically every game where we didn't play eachother.
Big fuck you to our cheating germans, you will surely not be missed