Yo, Smogon. It has been a while since I bothered a RMT so I decided to do one now. I, the amazing Squidward Tentacles, now present to with the help of my brethren: THE SQUID SQUAD SUPREME. Squillium@Leftovers
252 Attack, 252 Health, 4 Special Defense
Adamant
Contrary
Night Slash
Super Power
Psycho Cut
Topsy Turvy
SQUILLIUM FANCYSON! GASP! I hate to admit it, but my old rival from band class is a pretty good teammate to have. At first, Malamar looks like nothing special, having mediocre stats and a typing that has a 4x weakness to bug. However, I picked Malamar due to its ability, contrary.

Contrary allows me to do things that other pokemon could only dream of. First of all, Super Power. With Super Power and Contrary, Malamar's attack and defense stat go up, making it an excellent physical tank. Contrary also allows me to go on sticky web to boost speed which is pretty useful.

Malamar's typing is also unique and useful. Although bug type moves are common in the form of u-turn, Malamar also has good resistances as well as one other weakness, that being fairy. This typing has pretty good synergy with the rest of my team.

Topsy Turvy is also a nice move to have. Dragon Dancers and Quiver Dancers thing they're gonna destroy my team. Then I use Topsy Turvy. Then they rage quit. As for the other moves, Psycho Cut is STAB and so is Night Slash. Squidward@Black Sludge
252 Health, 240 Defense, 16 Speed
Bold
Liquid Ooze
Rapid Spin
Scald
Ice Beam
Toxic
AND THIS, LADIES AND GENTLEMEN, IS WHERE I COME IN. I, Squidward, will now make my debut on the team. Just to avoid confusion, I will call myself "Tentacruel."

Although Tentacruel is somewhat underused in the OU tier do to the high usage of defog, I still picked Tentacruel because of its many traits. For example, its ability, liquid ooze, is amazing. With liquid ooze, I can switch in on horn leech from Trevenant, leech seed and giga drain from Venusaur, and Drain Punch from many fighting types while the foe also loses health.

Tentacruel's typing is also crucial to the team. Resisting water types is something that no other team member can do. Also, Tentacruel only has 3 weaknesses: Psychic, Ground, and Electric, all which can be covered by ease from teammates.

As for the moves, rapid spin is to destroy hazards, scald is STAB and the chance to burn is nice against physical switch ins, Ice Beam is to destroy Dragons, and toxic is to assist dealing damage. In short, GO SQUIDWARD.

Bubble Bass@Eviolite
252 Defense, 252 Health, 4 Special Defense
Bold
Natural Cure
Soft Boiled
Heal Bell
Toxic
Seismic Toss
Everyone's favourite hide-everything-in-my-mouth-fish, its Bubble Bass! You may be thinking at first: Why Chansey when you have Blissey? Well, there are many reasons why I chose the bigger blob's younger sister.

One reason, probably the most important, is because of eviolite. Eviolite is an item that boosts the defense and special defense stats by 1.5. Due to this, Chansey become a much bulkier wall than Blissey could every dream of.

The ability, natural cure, is pretty nice as I can easily take a toxic/thunder wave/spore/will-o-wisp and switch out to heal myself.

Chansey's moves make it fit to be a cleric. Heal bell is to recover from statuses, especially burns on my physical tanks as that reduces their potential greatly. Soft Boiled is to recover health. Toxic is for additional damage and so is seismic toss.

Sea Bear@Leftovers
252 Health, 252 Defense, 4 Attack
Impish
Intimidate
Stealth Rock
Earthquake
Knock Off
U-Turn
That darn Sea Bear. You remember when it mauled me for "provoking" it. Well, after much talking (and stitches) I finally got the behemoth to join my team. I chose Landorus for multiple reasons.

One of these reasons is its typing. Landorus has great synergy with the rest of the team, being immune to a total of two types. Landorus`ice weakness is easily covered by Tentacruel and Scizor.

Next, its ability, Intimidate, makes this thing a physical wall. With max defense stat, Landorus can take physical moves like a champ, even waterfalls from Azumarill and Crawdaunt. Due to its awesome defense, it can easily set up stealth rock which aids my team dramatically.

Landorus also has a good move pool. As already explained, stealth rock is vital to my team and can really cripple Charizard and Talonflame. Knock Off is pretty common due to the extra power and is pretty good at taking off leftovers and eviolites of opposing walls. With U-Turn, Landorus forms a volt-turn core with Jolteon and Scizor, keeping the momentum. Is there anything that this Sea Bear can't do (besides not getting passed a circle drawn in dirt)? 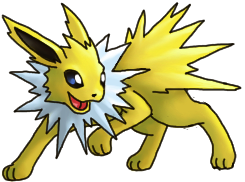 To start with, Jolteon's typing and ability are great. Having one weakness that is easily covered by Landorus and being immune to electric types, Jolteon has great synergy with the rest of the team. Depending on the match up, I might switch in Landorus in an electric type attack instead due to possesing earthquake.

Jolteon also has the potential to deal massive damage against the foe with choice specs. Jolteon can easily OHKO many pokemon in the OU tier including Salamence, Garchomp, Landorus, and Gliscor.

For the move set, I chose thunderbolt as the main STAB due to decent damage and 100% accuracy. Volt Switch forms a Volt-Turn core with Landorus and Scizor to keep momentum. Hidden Power Ice is to destroy ground types that think they have the upper hand. Shadow Ball is for coverage.

Fruit Fly@Scizornite
252 Attack, 252 Health, 4 Special Defense
Adamant
Technician
Bullet Punch
U-Turn
Roost
Sword Dance
When I was at my neighbor's house the other day, I saw some images of them riding a giant fly. I asked him where can I find it and he told me. So now I have a giant fruit fly on my team. Here is why.

The first reason why I chose Scizor is because of it's amazing defenses paired up with its typing. With one weakness and the same defense stat as Skarmory, Scizor should not be taken lightly. Like Landorus, Scizor has a 4x resistance to bug types which is useful to switch in on attacks aimed at Malamar. Its immunity to poison, although not necessary, is pretty useful to switch in on life orb Nidoking and whatnot.

The next reason why I chose Mega Scizor is because of its ability, Technician. This ability is great when paired up with bullet punch and u-turn.

Speaking of moves, Mega Scizor's set is pretty simple but effective. I can easily switch on hazard setters such as Forretress and set up sword dance as they set up. Bullet Punch is boosted by its ability and makes it an excellent revenge killer. U-turn forms a good volt-turn core with Landorus and Jolteon. As for roost, that is to recover health.

Well, I hoped you enjoyed my team. Much feedback would be appreciated.

I'm sorry because you posted the team some weeks ago, but I tried it and as I found it cool, I wanted to comment it.

Imo, bug bite is better than u-turn on scizor. Like this, you can save the SD and the move is more powerful (thanks to the ability). I think the volt-turn core with Jolteon is not really useful here, because Jolteon is not bulky at all. (This can seems cool like this : scizor is tanking (because he is quite slow) and then, jolteon come. But if the guy in front of you is slower than scizor, this isn't good at all. Sometimes, you can't enable scizor to take the opponent's move. And still, keeping the boost is really good imo).

The second thing I noticed is about Malamar. Superpower, Psycho-cut and night slash, are like obligated moves, but I think Topsy Turvy should be replaced by Substitute. Malamar is really slow. If you have to switch on Malamar, you won't have the time to do Topsy Turvy. More than this, Malamar isn't really Bulky, he got a double weakness insect, opponents may burn/toxic you and - again - he is slow. That's why I tried Subsitute, and seems to work well.

Sup, and thanks for rating!

I totally agree that bug bite is better than u-turn. I have no idea why the hell I would put that there. As for Malamar, I will try out substitute and hypnosis instead of topsy turvy.
You must log in or register to reply here.
Share:
Reddit Pinterest Tumblr WhatsApp Email Link