calling act, my opponent hasn't been answering posts from anyone on their wall despite having been online since i've posted there, and since people before me have posted there as well.

hate doing this but ill have to call act against aldo. the two of us couldn't find a time to play during weekdays because of conflicting schedules. i was traveling this weekend but i made some time to get this series done. yesterday, he was unavailable to play, but today, we picked 9 am gmt -4 and he hasn't shown. moving forward the only time we can play is during my mornings which is extremely difficult. i tried my best to get the games done before the next week starts. sorry my man. 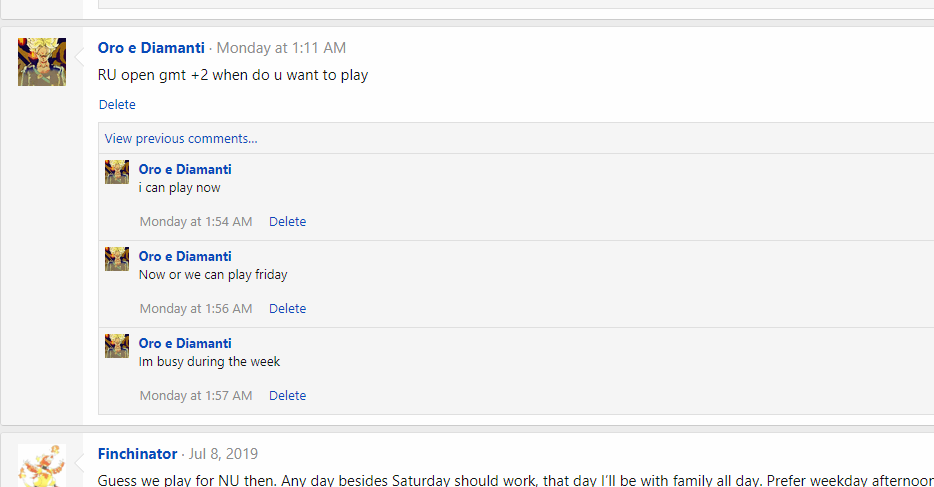 Moderator
won in 2 vs spiderman ggs

the end is nigh

My opponent hasn't shown up. I will let the host decide to either give me an activity win or allow an extension to happen due to me and my opponent only just scheduled on Friday since my opponent did had an extension the previous round.

If my opponent manages to come online I will be happy to play.

Opponent told me to take the win

opp missed time twice, will be on still for a couple more hours so i can play if he shows up but act in case he doesnt

Our completely different work schedules made scheduling to play this impossible so I will try a last push to get this done for sure, talked with Gunner Rohan and he agrees, and I will be the one making the sacrifice this time. Lets see what happens from here.

calling act i guess? :( responded to my opponent 1 day after he posted on my wall giving him my availability ranges and times and never responded back, however he pmd me yesterday on ps and asked me to play "rn" thing that i was able to do atm so i said "yes, just give me 5" because i was finishing a battle, after my battle ended tried to talk to my opponent but he went offline so i commented on the post on my wall again to arrange a potential reschedule, but he didnt reply although he has been online so i dont think he wants to play anymore?

r4 up in a moment, feel free to as always let me know if something looks amiss.