The World Cup of Pokémon 2020 - Qualifying Round 2 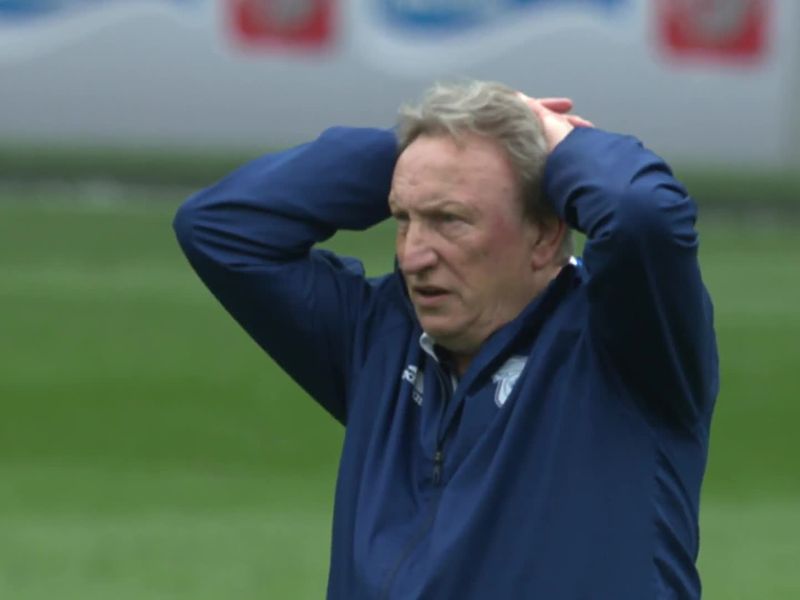 grats india, really pleased for your achievements here, hope to see you do well in the actual tournament, i'll be cheering for you and heat oceania

Congrats India, proud of my brothers for never giving up after a ton of years and finally getting in!

3 years on OminousDraco 's prayer has been answered These irrelevant countries certainly do not deserve eulogies.

jesus. How's this team so bad? At least they were fucking in the tournament before LOL HOW DID THEY NOT MAKE IT INTO THE TOURNAMENT??? LOOOL WHAT DUDES LOST TO A BUNCH OF RANDOM INDIANS I'VE NEVER EVEN HEARD OF LMAO THEY COULDNT STOP THE FUCKING FAKE BLIMLAX HELLO
Also, I'd like to give a shoutout to China for cementing themselves as the most overhyped team for the second year in a row
Dudes have so many nutriders and yet they were unable to make the tournament for the second year in a row...LIKE COME ON IT'S GREECE LOL WITHOUT FEAR oh my god man.

NYANPASU AND WELCOME TO PART 5 OF THE UNBIASED POWER RANKINGS
I guess we're just going to be doing 1 team at a time at this point since everyone's taking their sweet time nowadays. 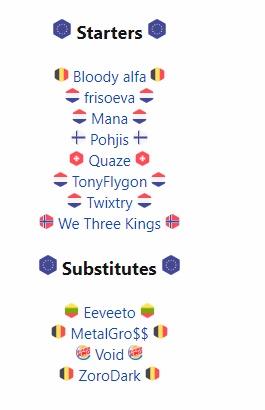 Europe is back for another year, hoping to rekindle some of the magic that helped them reach the finals in World Cup 2017. The team was definitely hurt by the new format change. Can their boomers adjust to the post-DLC zoomer metagame and help the squad reach the playoffs again?

The team doesn't really have a superstar player (not even SuperstarPearl this year, lol). They do have Mr. Ribbon Syndrome himself, though, Pohjis, who surprised me with a pretty solid run in the most recent Smogon Tour. He managed to make it all the way to the finals, and came pretty close to taking down ABR in game 3. A lot of his games didn't seem too impressive to me, but at least he managed to do well I guess. This run definitely elevates him a bit in my mind, but I'm definitely nowhere near ready to drink the Pohjis kool-aid. Speaking of impressive runs, Mana has seemingly come out of nowhere to dominate Classic so far. He was always known as a new gen player before this, so I think he should be able to translate his newfound skill pretty well to SS OU. He's always managed to do decent to solid in team tours before this, so I think he'll definitely go positive.

Next up, we have the face of Europe, TonyFlygon. Tony has managed to make the playoffs in a few individual tours during his short tenure as a Smogon player, and has managed to decently on the big stage as well, albeit in a small sample size. I'll definitely need to see more before I'm convinced, but I'd probably bank on him going positive more often than not. frisoeva's another player who has had a decent run so far in a small sample size. I've never really been overly impressed by him, but like Tony, I'd probably expect him go to positive. It wouldn't really surprise me too much if either of these two players "underperformed," though. I've always thought W3k was pretty decent; however, I don't really know how well he'll be able to transition to SS OU. It's also been a year and a half since his last showing on the big stage. I think his season could go either way.

The suspect slots on the lineup are Bloody Alfa, Quaze, and Twixtry. Bloody Alfa looked like a clown in the first game I watched him play in Corona PL; he did apparently go 12-7 combined in those tours, though. More importantly, he is coming off a pretty solid Smogon Tour run. He reached the semifinals and took down one of Smogon's biggest legends, McMeghan, in the process. Granted, the ending of his series against Roro didn't inspire too much confidence; he basically threw away a 100% win for no real reason. The endgame was still in his favor, even after the throw, but you can't really make plays like that on the big stage and expect to get away with it. He is currently 0-0 on the sheet, so there's really a wide range of outcomes here. I'll obviously need to see a lot more before I'm ready to have any semblance of confidence in him; personally, I think he'll struggle. Quaze, meanwhile, is someone I really have no confidence in. He was benched in SPL after a poor start, and currently sits at 3-7 on the sheet. He definitely didn't seem too competent from what I saw. Last up, we have Twixtry, a player who broke onto the scene in a big way with a nice 4-0 run last World Cup. He's been in decline ever since that showing, though, as he could only muster up a 3-3 record in Snake, and got absolutely washed to the tune of a 3-6 record in SPL. I really haven't seen anything from him to make me think that he can get out of this slump. I'd probably expect him to struggle too.

The bench features some interesting names. MetalGro$$ is an RBYer who is coming off of a nice SPL run. Does that really matter? Well, no LOL I'd be surprised if he played, honestly. The other three candidates could all see playing time, though. Void established himself as a pretty good player in my eyes, but he's definitely been in poor form lately; there's also no evidence he can succeed in SS OU. ZoroClick is someone I bold a fair amount; he hasn't been too hot lately on the big stage, but I still think he's better than some of the people starting for Europe right now. That being said, I obviously have no idea how much he's played SS OU. Considering that he's benched in favor of goons like Quaze to start the tour, I'll temper my expectations a fair bit here. The most interesting name here is Eeveeto, who amassed a ridiculous 20-7 combined record in Corona PL. More importantly, he also had a nice STour run...granted, his series against ABR was pretty atrocious LOL He's also struggled a bit on the big stage, and is coming off an 0-3 showing in SPL XI. I'll need to see more before I'm ready to have any faith in him, but I'm not going to completely write him off. I wouldn't bank on him doing anything substantial in this tour, though.

Overall, this is a decent team. They lack any real star power, which definitely hurts their chances of success. A lot of their players could definitely struggle in the limelight, and I'm really not sure if their boomers have what it takes to salvage any poor SS OU slots the team might have. It's definitely not a terrible team, and they have a decent shot of making the playoffs if things break their way. Perhaps the TonyFlygon effect can elevate this team to contender status, but for now...color me skeptical.

Disappointing end, the lads are trash but shoutout to ithrowrocksatkids for hopping in our team chat and building some teams, this guy has a passion for building and is real talented at it. Would have cheered for India but they all acted like clowns so gonna hope US West do the double

My goodness...... we won and I don't know how to react... this was a dream come true moment for my team and me. I hopped on to smogtours server and by the time I reached, we had already got our last win..... that moment tears ran through my eyes.... my heartbeats increased.... and a smile on face.... a dream which we saw in 2017 finally fulfilled in 2020 (4 YEARS) !!! I literally had no words but that feeling in me was sooo good that it just can't be explained.... I would like to thank all my team members and the supporters with whose constant support and motivation we could achieve this ! This achievement was never easy for us but we knew that it was never impossible too at the same time, with all the positivities and support we finally did it ! The helping and supportive attitude of each player is the biggest strength of my team, I'm thankful to have such good and helpful people.
I genuinely love you everyone.. I don't know how to thank you guys... I'll soon share our team's journey from 2017 till getting into wcop, the struggle, the challenges, the supporters and almost every small or big thing and that would be my way of expressing gratitude. I love you guys, love you so so sooo much !!
Team India


Ps: Did anyone observe I changed my profile pic after 3 years?

some dude here got nothing in life except sheet.

Im a bit late to the party but I like history memes so... 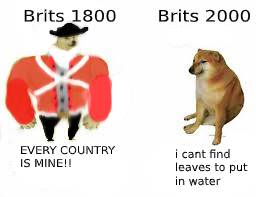 I click on tournament forums and see india qualified for the main part of WCoP.
Jiyo bhaiyo..

I want to personally thank all the players for posting replays. I have learned a lot of SS OU just from watching and analyzing your games (despite the majority of them being pretty lackluster and monotonous).

Summary of these games:
1) use Clefable
2) use one of the black birds and one of the ugly blue water Pokemon
3) have Knock Off on at least one of your Pokemon
4) lead with a ‘mon with Knock Off and keep clicking that move and switching back and forth with the same two Pokemon until you bore your opponent to death so that they’ll eventually make a careless move

That sums up the current SS OU metagame. It’s really no player’s fault; SS OU is just bad. I am sure with the release of HAs and more incoming Pokemon such as Slowbro, Tangrowth, etc. there will be more excitement and variety on the horizon.

grats greece from a fellow greek-american!

Grats, tho I'd switch to chomper here

Well done to India and Greece!

it's not coming home then lads

Live for the applause

Rooting for Team Europe to finally win it!

Tomahawk said:
Rooting for Team Europe to finally win it!
Click to expand...

yeah? well i hope they fucking dont and instead northeast wins it. fuck everyone not on my team