The next online competition is the Tundra Tourney; a 3v3 singles format involving the Crowned Tundra Pokédex!


Notable Pokémon at a glance:

Moderator
Is it just me, or is switching into Spectrier gonna be hard as hell? You got like... Snorlax, Weavile, Grimmsnarl, and Obstagoon pretty much, not a whole lot of ghost resists roaming around, really hows how valuable Porygon2 is against that thing... Makes me think that Mimikyu and Dragapult are gonna be everywhere to make sure that monster is dealt with. I also expect a ton of Snorlax to deal with Spectrier too.

On the flip side for Glastrier, I'm glad Mimikyu is here just to give it TR support. I might actually look at a semi TR team here, because Mimikyu and Glastrier are a good start for that, and you got some other good slow stuff like Snorlax, Ferrothorn, and Lapras!

There seems to be an error on Showdown for this tourney. It allows the use of the likes of Rillaboom, Landorus, Blaziken, Cinderace, all of which are not part of the Pokedex.

DreamPrince said:
There seems to be an error on Showdown for this tourney. It allows the use of the likes of Rillaboom, Landorus, Blaziken, Cinderace, all of which are not part of the Pokedex.
Click to expand...

A fix for this has been merged, we’re just waiting for it to be patched in. Sit tight!

The next online competition is the Tundra Tourney; a 3v3 singles format involving the Crowned Tundra Pokédex!


Notable Pokémon at a glance:

For now there’s a ladder on Showdown to practice on. For the real competition you need to:

Is it like an official competition? do I press that or is there some kind of code I need to take part

Step Korean said:
Is it like an official competition? do I press that or is there some kind of code I need to take part
Click to expand...

Just follow Can’t Say’s steps and you will be fine.

Step Korean said:
Is it like an official competition? do I press that or is there some kind of code I need to take part
Click to expand...

Late reply but yes, it is an official competition from sword and shield using Pokemon from the tundra Pokedex. It is not a Pokemon Showdown based tournament rather an in game one if that is what you meant- thus you will need to participate on a Nintendo switch device between; 'November 12 at 4:00 p.m. PST though November 15 at 3:59 p.m. PST.' If you do not have a Nintendo switch device however, you can still participate in the Tundra Tourney format which is a temporary format showcasing the rules of the tournament. You'll find it at the bottom of Sw/Sh singles. Enjoy!

Hey guys, do we get other rewards if we do well in the Tundra Tourney or just 50 bp for everyone?

Paps93 said:
Hey guys, do we get other rewards if we do well in the Tundra Tourney or just 50 bp for everyone?
Click to expand...

The 50 BP is a participation gift upon entering the tournament. Based on what I have seen, this is the only prize from this tournament and the rest is to have fun and enjoy!

How to Receive the Participation Gift of 50 Battle Points:

SnorkleDove said:
The 50 BP is a participation gift upon entering the tournament. Based on what I have seen, this is the only prize from this tournament and the rest is to have fun and enjoy!

How to Receive the Participation Gift of 50 Battle Points:

Okay, thank you very much

Battle Stadium Head
So what I’ve played in game so far has been completely different than the practice ladder on Showdown. People on PS were just spamming new things that came in the CT dex so I tried to do the same with ways of answering what I thought was popular, but the actual tournament is infested with the usual Mimikyu, Dragapult, Ferrothorn, Tyranitar, and Mamoswine. There’s also quite a lot of Glastrier which to me feels like the strongest pick but still overlooked in favour of the OG brokens.

My record is really poor at 17-13, but a good 7 of my losses were literally just the opponent getting a timely critical hit. It feels that using things like screens, Curse Snorlax or Max Steelspike / Quake Metagross causes crits to happen more often. I haven’t gotten para’d, burned, or flinched once. Just crits lol. And I haven’t stolen a win back yet either, so I’ve lost some motivation to play more but we’ll see.

The most innovative thing I ran into was Klutz Golurk with Trick and Assault Vest which totally owned my Regieleki. Focus Sash Nidoking with Sucker Punch also popped me, I forgot it even learned that. There was a lead Lapras that set up Veil and Electric Terrain so their Regieleki could spam Rising Voltage and not immediately die. I’ve seen a few Sturdy Relicanth with Custap Berry and Stealth Rock, Yawn and Head Smash. Aggron also runs Custap with Endeavor. But the rest has just been BSS minus what’s banned. So just grab your favourite BSS team and swap out a member or two for something that’s allowed and you’ll be fine. Just don’t get crit...
Last edited: Nov 14, 2020

I threw together a suuuuuuuuper last second team for this comp (I literally started Sunday midnight in the US) with this team right here featuring Nidoqueen, Regieleki, and Corviknight in a fashion similar to my Simple Symphony team where I had toxic spikes Garbodor with subseed Serperior and kee berry CM Reuniclus.
https://pokepast.es/990b88260a7a4ba1
It's a real solid team (barring Gyarados who literally only had the use of resisting Kanto Moltres Max burn-up) due to Kanto Zapdos being everywhere which was a huge pain especially cuz of it being paired with mamo. I definitely wished that I had a rocker on this type of team due to its somewhat passive nature and the last 3 pokemon functioning as revenge killers most of the time. I'd managed to get rating 1664/ No. 427 with the team with only like 22 or so games in which is nice at least

Hey I'm back! It's been a while since I've posted anything on Smogon. Anyways, here's my team for this competition: 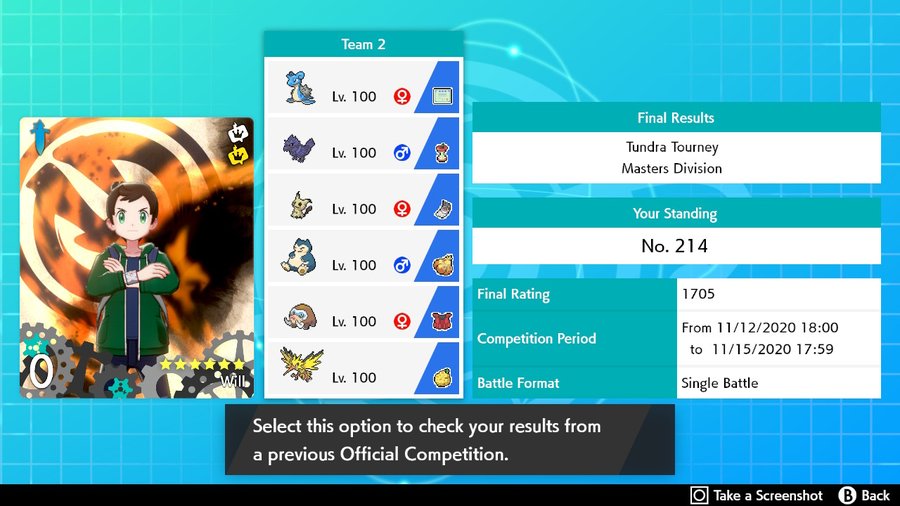 I was kind of busy this weekend so I just decided to get to 1700 rating and stop there. I didn't have a ton of time to prepare since I've been so focused on VGC lately for Players Cup 2, but the team ended up working out pretty well. Corviknight and Snorlax were there to tank physical and special attacks respectively, while Zapdos was there to take on mons like opposing Corviknight, Milotic and Ferrothorn, as well as just being really good in this format in general. AV Mamoswine could take pretty much any hit from Zapdos or Regieleki and KO them back as well as hit a ton of the metagame for super effective damage, and Lapras could help to break through bulky mons like Snorlax or Milotic with sheer cold and/or just sweep with weakness policy. Mimiku worked great as a late game sweeper as well as helped against some matchups this team otherwise struggles with.

It's interesting because I hadn't really played any BSS in series 7 yet when I made this team, but after playing a few games recently, I realized that it's kind of similar to some common BSS teams in series 7. Or at least from what I've seen so far anyways.

There's no way my team with three ice types would work in a normal format lol, but I somehow made it to 43rd place (1767 rating). Terrakion was pretty much the only threatening fighting type in the Crown Tundra dex, so overloading on ice types wasn't that detrimental. Actually, they sort of made it easier for offensive Regieleki to work, either by overpowering the opponent's ground type before revealing Regieleki or just discouraging them from selecting their ground type in the first place, especially if it was Garchomp.

I almost always Dynamaxed either Lapras or Glastrier, and it was kind of funny seeing the ways people would try to avoid setting off Weakness Policy. One opponent had their Metagross use Max Lightning against Glastrier, so I ended up winning by spamming Regieleki's Rising Voltage.

Shadow Tag Gothitelle was my mind-numbing catch-all answer to mind-numbing stall teams, and Infiltrator Dragapult was occasionally useful against screens. I ended up not really needing it against most Substitute users since both Glastrier and Mamoswine had Icicle Spear (also extremely useful for damaging Mimikyu through its disguise). 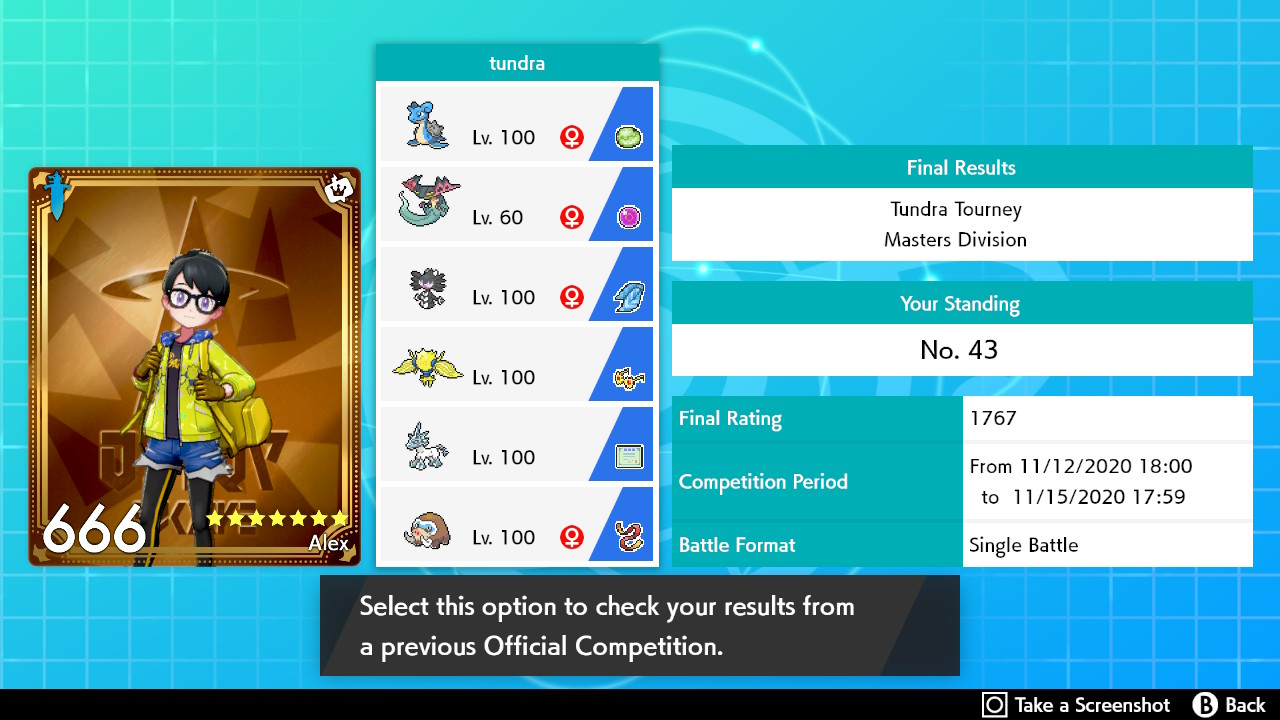 After some very limited testing on the Showdown ladder and some threat-checking reading and re-reading the Tundra Pokédex, I managed to put together a fairly standard team that tried to answer what I thought were the most common used Mons (like of course Mimikyu and I was very scared of Glastrier) but with a twist: I really really wanted to use Kabutops.

I just love Kabutops and the last (and only) time I used the Kanto fossil was in BW Ubers, never on a cartridge format, I really wanted to give him a chance to shine on the battlefield, again.

I ended up with this team:

Corviknight @ Leftovers
Ability: Mirror Armor
Level: 50
EVs: 252 HP / 252 Def / 4 Spe
Impish Nature
- Iron Defense
- Roost
- Body Press
- Brave Bird
In the end it was a blast. I had a lot of funny moments in this tournament, like getting destroyed by an unexpected WP Regirock or losing a Kanto fossil showdown vs an Omastar because I was punished for my bulky, slow Kabutops set.
Kabutops worked really well and I chose him on preview the majority of the time, I pulled some 1v3 and some party wipes with him and it was crucial. Man I love Kabutops.

Day one I was 11-4, day two 12-3 at 1715 score, which unfortunately was also my peak.
Day three was utterly catastrophic: hax knocked at the door and to be honest, I wasn't even that focused and a lot of the time it was just my fault.
I managed to regain composure halfway through the 15 battles and re-climbed back to 1700 points, where I stopped even if I had two battles left because I was extremely tired and my plays were deteriorating. 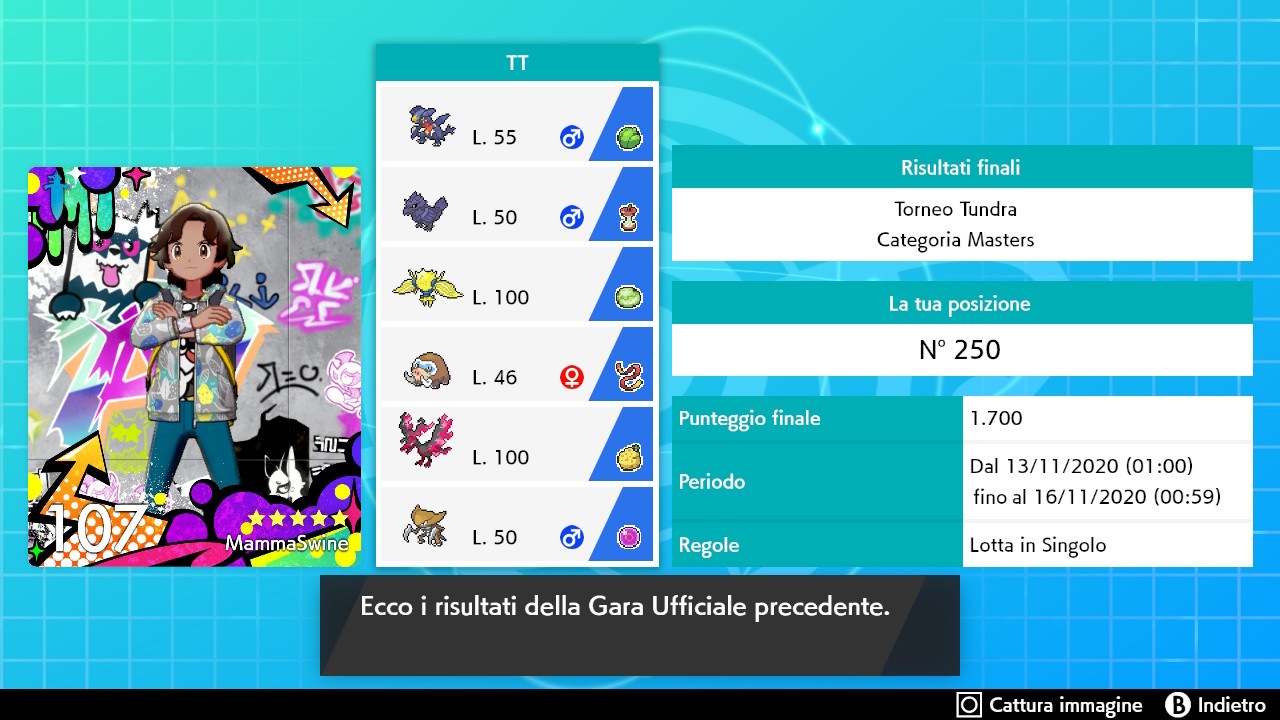 Two words on the team:
Garchomp has Fire Fang because Kabutops gets walled by Ferrothorn and I wanted some breath against it, I didn't like Garchomp overall, it got the job done and the second electric immunity was crucial to scare Regieleki and clear the path for Kabutops, but I used it a lot less than others on the team.
Corviknight is an old set I had trained in the box a lot of time ago (and I don't like it too much, it's very passive and easy to take advantage of) but it got the job done, it checked Mimikyu and Glastrier well, didn't use it too much but it was crucial.
For Kabutops, I wanted to maximize bulk while having max adamant attack and reach the speed benchmark in order to outspeed Dragapult in rain. It worked very well: the bulk let me get a Swords Dance in a lot of situations with screens up, and then he proceeded to sweep. It was the star of the team.
Moltres was used because I was scared of Spectrier and I wanted something that could try to setup in front of it. And I love Galarian Moltres. The spread is very random because I didn't have time to calculate and such. Just the speed to get over 100s base (Zapdos) with a +1, and a lot of bulk. Regieleki just gets over scarf Garchomp (don't think it's still a thing but whatever I needed some imaginary benchmark to justify my HP EVs).
Last edited: Nov 17, 2020
You must log in or register to reply here.
Share:
Reddit Pinterest Tumblr WhatsApp Email Link