WELCOME TO THE NEW DECADE, WAHOO!

Moderator
The results are now out for the competition! You can find them by going under online competitions.

And guess what I saw my discord alerts right before going to bed...

I'm so happy right now! After winning the first Battle Spot Special (and also the XY version of the VGC 16 ladder, thats a long and weird story lol), I never figued I'd actually win one of the tournament ladders, much less the final one with all my favorite Ubers! I'm also really glad I settledl, I was damn tempted to go for 1900, but decided against it because I remembered that bad turn of luck losing to a Calm Mind crit war with Fairy Arceus lol.

Also, shout out to Jibaku for getting 7th. We got two Smogoners in the top 10, and both are old Uber players too!

I'm still working on a full team report that will also have a lot of smogon shoutouts (it's also my 10th aniversery thread). Probably won't be up until this weekend since I got yet another calc II exam to deal with. It's... gonna be a large thread to say the least!

Battle Stadium Head
Just wanted to congratulate all the Smogon crowd for doing so well in this; marilli greilmercenary9 Jibaku for all getting >1800, but especially Theorymon for winning the whole damn thing even if he used the broken strategy of the Sunday rush lol

I had been planning to edit down my streams into more watchable YouTube videos (I might still do it) but I've been swamped since this competition ended. I've highlighted them all on Twitch for now though:

Here's the team too: 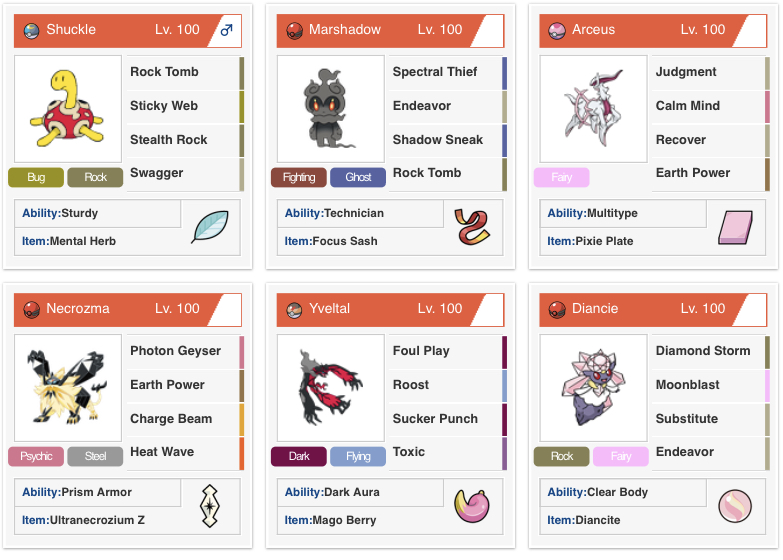 I wanted to go with a gimmicky offence sort of build. Everything in the meta was kinda too bulky to outright sweep (unless using like DD/SD Ray or something stupid) so I wanted to lure stuff in to soften them up with Endeavor and then sweep or win like a 1v1 or something. I tested stuff like Naganadel and Blacephalon for Endeavor + Beast Boost, and (Mega) Blaziken with Power-Up Punch (and Baton Pass), but Charge Beam Necrozma was funnily enough the best in testing. It was also a beast under webs so it synergised with Swagger Shuckle + Marshadow as well. I kept losing to Kyogre, Xerneas, and Yveltal+Dusk Mane cores, and there were WAY MORE of those things in my cart experience than on Showdown so I got mished pretty hard. I somewhat regret not condensing Shuckle + Diancie into some kind of Smeargle set, and then using the free teamslot on something like NormalCeus, Mega Gengar, Lunala, or Sash Mega Ray. I don't think I ever used Heat Wave on Necro, there were no Ferrothorn anywhere. Even though it was timid, Sunsteel Strike would have been useful for denting a set-up Xerneas at least. But I had a lot of fun and I did it my way too so I'm happy with that.

This = 44 games, and I tried going for a 46th game on stream and it wouldn't let me. No idea why I only have 44 counted, I'm guessing that maybe the DC at team preview against Pat (end of 3rd stream/start of 4th stream) was removed afterwards but I still lost the points(?)

Anyway, so long Gen 7... I hope online competitions continue to improve in Sword and Shield!

Is this one Nature locked?

Swordmalice said:
Is this one Nature locked?
Click to expand...

Anyone else having problems getting their code? PGL is giving me a page not found/error 404 when I click the link to redeem. I've never had an issue since my first comp last November.

FaintingShinies said:
Anyone else having problems getting their code? PGL is giving me a page not found/error 404 when I click the link to redeem. I've never had an issue since my first comp last November.
Click to expand...

Kj the Alola Champion said:
Many people are having problems with it , i think the link on the website is broken.
Try the link that serebii has , thats how i got mine
https://twitter.com/i/web/status/1185095122729553920
Click to expand...

I had to use this link as well since the regular PGL link is still broken as of now. FYI for anybody reading.

Kj the Alola Champion said:
Many people are having problems with it , i think the link on the website is broken.
Try the link that serebii has , thats how i got mine
https://twitter.com/i/web/status/1185095122729553920
Click to expand...

I contacted PGL customer service and they gave me a new link within 2hrs and it worked. I sure am going to miss the "adventures" of PGL!!
You must log in or register to reply here.
Share:
Reddit Pinterest Tumblr WhatsApp Email Link