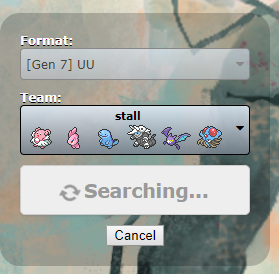 This UU stall RMT is divided into four sections. First, I will post my team and give descriptions for each Pokemon describing the role they play on the team and how they synergize with each other. Second, I will list out some of the threats to stall in general and my team specifically and discuss how to deal with them. Third, I will analyze a few replays that showcase how the team deals with threats and functions in the metagame. Lastly, I will discuss the place of stall in the metagame as a whole, how my team relates to larger themes, and areas of potential improvement.

Blissey is a natural choice on stall for two major reasons: the ability to provide essential utility moves and the ability to counter common special attackers like Choice Specs Primarina, which is otherwise hard to counter. It synergizes well on my team for fairly obvious reasons, being able to take strong special moves that nobody else can and healing everything's status. I choose to max defense because I don't feel I need any special defense investment to counter attackers like standard Pidgeot Mega and Choice Specs Primarina. The extra defense helps a lot versus moderate physical moves like Hippowdon's Earthquake and Pursuit.

Alomomola is one of the most popular partners to Blissey because it allows Blissey to run Heal Bell or Stealth Rock, as Alomomola covers the Wish role. Very high physical bulk and Regenerator means it can counter most physical attackers without boosting moves, even the likes of Choice Band Terrakion can be fairly easily pivoted around. Additionally, it has good synergy with the rest of the team because most physical attackers that can boost on Alomomola, like Cobalion and Terrakion, have extreme trouble breaking past Quagsire. For example, one tactic Alomomola can use is Wishing on a boosting move, then switching to Quagsire who will either 1) heal off the incoming attack 2) not care about a second boost 3) get double switched on. Knock Off and Toxic are used to ease the matchup versus other stall teams and help check or counter three important stallbreakers: Chandelure, Marowak-Alolan, and Gengar. The EVs are not specialized for anything, but I find it helps Alomomola stay in on Nidoking and Chandelure most of the time, which can be considered stallbreakers depending on their set.

Quagsire completes the highly regarded stall core of Blissey/Alomomola/Quagsire. It plays two important roles for my team: blocking Volt Switch cycles and stopping popular set up sweepers like Swords Dance Gliscor. Although Quagsire has many moves to choose from, with only Recover being truly necessary, I choose these four for reliability in STABs and extra insurance for some set up sweepers. Haze stops traditional bulky boosters like Gliscor and Suicune, while also beating an unconventional but viable stall breaking tactic, Stored Power.

Aggron Mega is fairly standard on stall and provides extreme physical bulk to stop attackers like Beedrill Mega and, to some extent, Haxorus. In terms of synergy, it counters three particularly important stall breakers: CM Psyshock Latias, Work Up Pidgeot, and Nasty Plot Heal Bell Togekiss. More special defense might be useful for these extremely important roles, but also I find Impish helpful for physical fighting Pokemon which are fairly dangerous still and Haxorus which is extremely dangerous. Earthquake gets very good coverage with Heavy Slam and deters some important attackers like Infernape and Chandelure, while Toxic is useful in general and specifically helps versus many hazard control Pokemon.

This is the only set that isn't very standard on my team. Crobat helps counter two important stall breakers: Serperior and Nasty Plot Heal Bell Togekiss. Additionally, it provides one source of hazard control in Defog, especially helpful versus hyper offense teams that lose their Stealth Rock user early on, important speed to revenge threats like Decidueye, a x4 resistance to Fighting moves, and a nifty ability that lets it help check Sub CM Chandelure. Basically, this Pokemon packs as much utility as possible and tries to fill in as many roles as I can.

Tentacruel is the best counter I have to NP Infernape and Lucario - two special attackers that easily break through Blissey. It provides extremely important utility, rivaled only by Crobat, and deadly Toxic Spikes which gives me a leg up versus many opposing stall teams and other teams in general. Rapid Spin is a second source of hazard control, which lets me keep my own hazards and gives me a way of stopping setters like Klefki, which Crobat struggles badly against. The grounded Poison nature of Tentacruel is also important for opposing Toxic Spikes. Sludge Bomb is just useful in general, heavily pressuring balance teams that rely on Sylveon for example. Haze didn't seem necessary with two other users, Knock Off is already on Alomomola (although this would help versus Chandelure), and Sludge Wave is pretty comparable to Sludge Bomb anyways except for rare Bulletproof users.

UU has many Pokemon considered stallbreakers or wallbreakers, this section just addresses the most common ones.
I'll expand on my thoughts in the fourth section, but this short list has two main points: first, it shows potential areas of improvement, second, it proves definitively that UU has plenty of stallbreakers that stall teams need to be concerned with.

My opponent has a fairly even match up in my opinion, despite having a good tactic for stall (Future Sight + CB Terrakion), his team is also very easily chipped and vulnerable to status as most of his Pokemon lack significant recovery. I'm familiar with the Future Sight strategy which is why I immediately go to Alomomola on turn 5, knowing that Terrakion, likely Banded, is incoming. Every time it appears I am about to get a pretty big advantage, my opponent surprises me - this occurs on turn 10, when he uses an unexpected Giga Volt Havoc to badly damage Aggron Mega and on turn 30, when he reveals Rest Choice Band Terrakion to heal status. by then my position is worse and after getting Quagsire weakened, which lets his SD Scizor sweep, I forfeit. In terms of the metagame, it shows how powerful this stall is versus standard teams, as my team had sizeable advantages before a curve ball was thrown. the entire tactic of Future Sight is already unorthodox, and even that had a hard time breaking through without other surprises.

My opponent is using a similar strategy but thye play a bit more inaccurately and they probably lack some of the surprises the previous opponent had. My opponent does some questionable ideas like let Rotom-C get badly Poisoned on turn 5 and Terrakion on turn 6. They don't even claim what would be nearly a free KO on turn 18 with Close Combat, instead letting Aggron Mega live as death fodder. After they decline the opportunity to Purusit Blissey on turn 22 and to maintain momentum on turn 24, it becomes next to impossible for them to win and they soon forfeit. This helps confirm one important theme from the previous replay; it is hard to beat this team using standard sets and even good tactics like Future Sight have to be played accurately.

Versus an unorthodox semi stall team with Gengar

My opponent is using team focused on walling threats and then trying to clean with an uncommon Hex Gengar set or CM Slowbro. However, without a dedicated stallbreaker, he just appears to be biting on rocks most of the game, not playing very accurately either. For example, there was no reason to let Crobat get Knocked Off early on turn 3, which led to its demise later. And Blissey was also needlessly Knocked Off on turn 23. Small inaccuracies add up and my opponent never really puts on any significant pressure, so they throw in the towel before turn 100. This replay shows that it is difficult to outlast a stall team if you're not using stall yourself, and you need concrete threats to make a difference (Taunt on Gengar for example).

Versus a fairly standard balance team but with Haxorus

Despite having one of the best stallbreakers versus my team, Haxorus, my opponent doesn't prepare enough before the attack. Aggron Mega is fairly healthy still and he switches in on a healthy Blissey, which means the risk of me using Toxic is much greater. He makes some bad predictions and his attack does not accomplishment much except weakening both Haxorus and Aggron Mega and using the Z move by turn 9. He gets a second try bu fully healing Haxorus with Sylveon b yturn 12, but I also get to heal Aggron Mega for a second try myself - the only difference being I used his Z move and likely confirmed he is not SD. He tries to sweep with Haxorus almost immediately again, but that fails despite some hax, and after his other sweeper Scizor is neutralized, he gives up. This game shows that there are optimal times to attack, and even stallbreakers need to be prepared before trying to attack.

The framework most competitive players have in understanding teams and styles is a spectrum, on one side is offense which in theory makes undefendable threats and on the other side is defense which in theory defends against all threats. This team fits into that framework as a stall team because it defends against threats, although not all of them as the threat list clearly shows. An analogy that represents the relation this team has to stall is this; this team is to stall as a Manectric Mega + Scizor team is to offensive Volt-Turn. It is very standard.

Right now, stall is the best play style in the tier because it can prepare for basically every single standard threat. Although there might be problematic stall breakers like Crawdaunt, which poses problems for teams like this one that do not use Altaria Mega, the strength is that they there are too many threats in the tier to just fill any standard team with more than 2, or even more than 1, stall breaker. Therefore people will often rely on threats like CM Latias which are not truly stall breakers, but still pose a threat. And a second point about the strength of stall that is frequently forgotten about is that nearly all standard bulky offensive teams have to use Pokemon that are nearly useless versus stall, like Choice Scarf Infernape or CM Suicune. Using the framework before, it's not actually intuitive that stall frequently has a matchup advantage, because although it should counter all threats, offense should in theory make too many threats. But in practice, stall is going to have an advantage usually against standard teams.

Areas of improvement can be concentrated mainly in the threatlist, for example, it would be better to have a more reliable Crawdaunt response. There are larger themes though that show some of the weaknesses of the team. For example, both of my hazard control Pokemon are weak to Psychic and Electric, making setters like Azelf and Nihilego fairly problematic for my team. it would be best if the rates focused on these kinds of weaknesses, and specified the trade offs in the proposals. Like all my teams, this is a work in progress. Thank you for any rates.