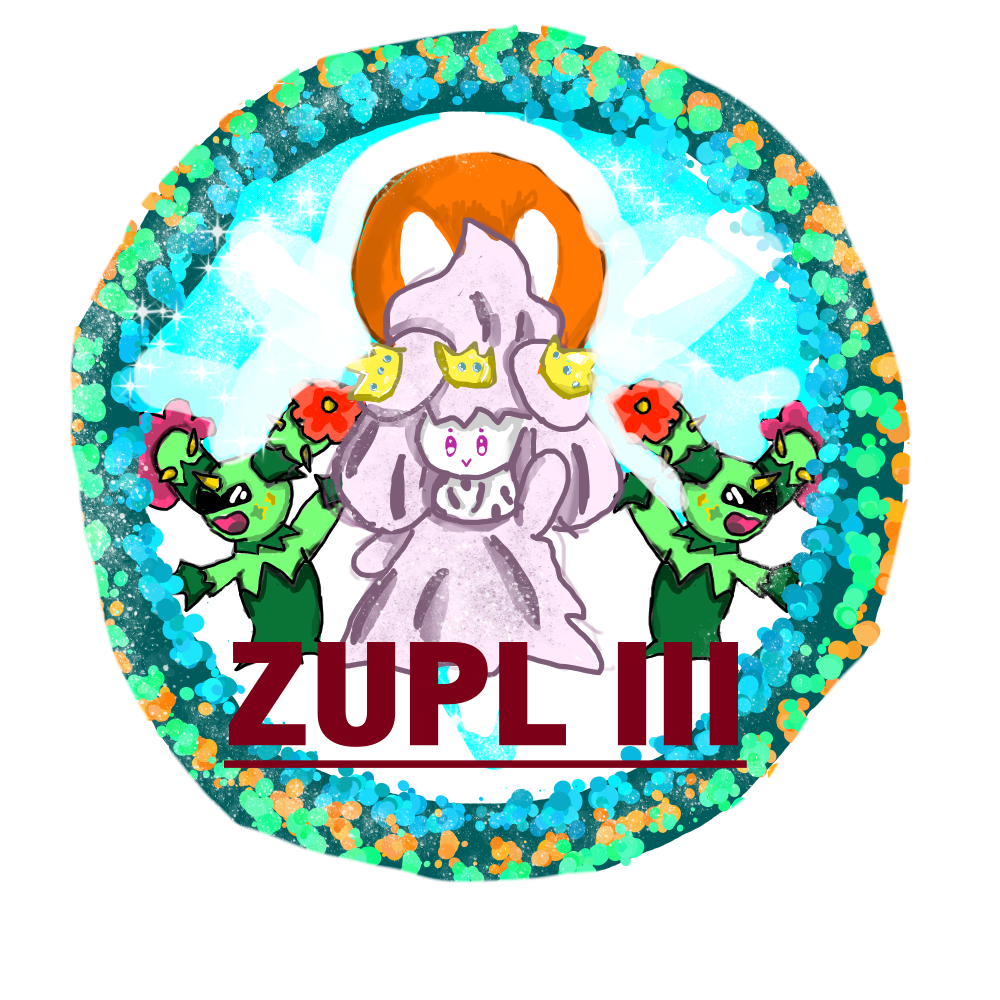 My First ZUPL! I’m so excited and I hope you guys are as well. Gonna start this off with a few SS predicts to generate hype. I’m only predicting SS because that’s what I have the most knowledge about, so the wins are only based on the 4 slots I can talk about really. Looking forward to these games!


(3) Morpeek-A-Boos vs. Humilau Hakamo-os (1)
czim vs. Tuthur (60/40)
Having teamed with Tuthur in UMPL, I am well aware of Tuthur’s creativity and ability to concoct amazing teams, nonetheless I believe czim is the better overall player and should take this game most likely. Would not be surprised though to see Tuthur bring some interesting tech in the builder that catches czim off guard.

AstilCodex vs. Feliburn(45/55)
I love both of these guys. Amazing players and great overall ppl, but I’m giving Feli the edge here based on skill and experience with mons in general. AstilCodex hasn’t seriously participated in a recent SS ZU tour(that I remember) and although has been getting back into it, doesn’t have that experience that I know Feliburn has lots of. My only real apprehension for giving Feli a guaranteed win is in the builder, as I’m unsure who is building SS for the Hakamo’os whereas the Morpekos have tons of depth in that department. If Feli has a solid team though I am confident he takes this.

EviGaro vs. pokemonisfun(60/40)
Both amazing players, I don’t have much experience facing or seeing pif play anything besides UU(which they excel at) where’s EviGaro was a solid performer in the last team tour which featured SS ZU. I know that pif did really well in the last ZUPL but that was a long ass time ago, whereas from what I know Evi is rlly caught up with the meta. This one also comes down to who is building for the Hakas(can i call them that?) and I think Evi’s skill paired with the great building support they have should be enough to take this one.

TheFranklin vs. Louna(70/30)
I know nothing about Louna and good things ab TFL. TFL performed rlly well in the No Johns Tour, and I think with the support and a good team, this one should be his easily.

(1) Lucky Stunkys vs. To Pimp A Butterfree (3)
yovan33321 vs. pdt(30/70)
An interesting mu, yovan has been making a name for himself in other tiers than ZU as of late whereas pdt is known as an overall menace. This game will come down to pdt’s amazing building and skill vs yovan’s crackhead builds. Will pdt’s great ss zu builds for umpl continue in this tournament? I believe so.
TJ vs. Sensei Axew(60/40)
I hate voting against my friends but TJ is on fire rn in SS ZU. Winning the No Johns tour using like 3 teams is a feat in and of itself, but performing consistently in UMPL right before that is almost as impressive. Axew is no slouch though, being known as a great low tier player overall, and having a few good individual tour wins himself. I’m really excited for this match up only because I want Sensei Haxew to prove me wrong. Based on zu performance though this one goes to TJ if only on a slight margin.
Luck O’ the Irish vs. tlenit(40/60)
Once again here I am predicting against my friends. Tlenit is an amazing player who has performed very well in the most recent ZU ssnl beating me in finals

. Irish is another great player who after taking what seems like a hiatus from mons, came back in full force to participate in PULT after almost never touching the tier himself. I kinda wanna Pat my own back on this one, as Irish has shown interest in SS ZU because I told him how similar it was to pre DLC NU, which he excelled at. If he is able to bring the same heat he used during that meta, I can easily see this one being a steal, but if he is unable to figure this slightly different meta out yet, tlenit should have this one handily based on previous experience.
Maple vs. Drud(30/70)
Maple is a competent player. We all know this. They have performed very well in most tours they join, but ZU is a different menace all together. I have 0 knowledge about Maple’s zu experience quedara Drud had quietly and consistently been racking up experience and wins in this tier. This one goes to drud based on how well he’s playing right now and how much more Ik ab them in this tier. Don’t count Maple out yet tho!

Hope you guys enjoyed these predicts and make sure to make some more for SS and some old gens, have a fun ZUPL!!

daniYSB said:
I know nothing about Louna and good things ab TFL. TFL performed rlly well in the No Johns Tour, and I think with the support and a good team, this one should be his easily.
Click to expand...

Hakamo-os will easily win versus Morpekos because we have the type advantage.

Stunkies vs Butterfree (3-5)
SS: yovan vs pdt, games versus yovan are usually decided on matchup because of how weird his teams are, since they are often unprepared for one or two top mon. However, I think pdt's ig is above yovan's one, so in a neutral matchup pdt should get the victory.
SS: TJ vs Sensei Axew, idk Sensei Axew but TJ has been on fire for the last two ZU tours. However, I can really see this getting overturned in the builder since TJ is used to play BA+ ptdt's build and neither are in his team. Also pdt+tlenit+Drud+Greybaum looks like a very creative teambuilding core that should provide better teams than Stunkys which only rely on Chokepic+Ho3n.
SS: Luck O' the Irish vs tlenit, kinda the same thing than above, except this time the bolded player is also my favorite teambuilding wise.
SS: Maple vs Drud, once again, I'm giving the edge to Butterfree's teambuilding and their player's better knowledge of ZU.
SM: Rawmelon vs Greybaum, Rawmelon may be a legend of SMZU but he isn't the same player than he used to be. His record last ZUPL confirmed it, whereas Greybaum is still one of the best SM ZU player and builder.
ORAS: Ho3n vs zS, idk much zS ingame, but idt he is better than Ho3n. Additionnally, Ho3n knows better the tier than anyone in the Butterfree's team so he should also have a sturdier team.
BW: JonAmon25 vs DnB, this won't even be close.
DPP: Cigtar vs gglrg, Cigtar has been consistent in DPP ZU for a while, while gglrg is a sort of newcomer.

Flamencos vs Persians (6-1)
SS: kay vs OBB, no match
SS: dani vs Hitmonstars, also a no match but i'm also amazed Hitmonstars is on the line-up, I think PrinceOfAllTacos and 5dots are both far superior than Hitmonstars ingame wise.
SS: terreitor vs Landon, closer, I think both players have a similar level but Flamencos teambuilding is going to make the difference.
SS: Shiftry vs beauts, same as above.
SM: Rav3 vs LPY, this isn't ZUPL I, LPY hasn't played mon for almost a year and isn't as amazing as he used to.
ORAS: watashi vs 5gen, idk watashi at all, but based when i've been told they are an excellent player and they'll be receiving teams from ORAS god TWiTT, on the other side 5gen is one of the best ORAS player. Definetely one of the hl of the week.
BW: roxiee vs SBPC, giving the edge to the BW ZU main as idk much about roxiee. I wouldn't be surprised to see them win though.
DPP: Heysup vs 275p, another no match.
Last edited: Aug 23, 2021

(6) Morpeek-A-Boos vs. Humilau Hakamo-os (2)
SS: czim vs. Tuthur czim is the worst people i have never meet, he has no chance to win here and i hope he will 0-7 this year.
SS: AstilCodex vs. Feliburn close one here, adventage to feliburn because of his better ingame
SS: EviGaro vs. pokemonisfun cool game in perspective
SS: TheFranklin vs. Louna french clause 2
SM: a fruitshop owner vs. crying afo is still the best sm player
ORAS: Toto vs. Alkione french clause 3
BW: BloodAce vs. Tack close game too but i see the zupl winner win here
DPP: neomon vs. The Strap i don't know the strap


(4) Fiery Flamencos vs. Pay Day Persians (4)
SS: kay vs. OranBerryBlissey10 cool pairing but i prefer kay
SS: daniYSB vs. Hitmonstars i see daniYSB everywhere but he does not win a lot
SS: terreitor vs. Landon Landon is just better
SS: z3ll1 vs. beauts it's time for z3ll1 to shine
SM: Rav3 vs. LPY sm hl of the week, but i think rav3 is more active
ORAS: watashi vs. 5gen does watashi play zu? does watashi play oras
BW: roxiee vs. SBPC bw main
DPP: Heysup vs. 275p i see heysup crit in the 3 last turns
Last edited: Aug 23, 2021

https://replay.pokemonshowdown.com/gen7zu-1404319176-3un8whfhfve4pdqsnbxvrx5v38p3fnfpw
won a fun one

a fruitshop owner said:
https://replay.pokemonshowdown.com/gen7zu-1404319176-3un8whfhfve4pdqsnbxvrx5v38p3fnfpw
won a fun one
Click to expand...

https://replay.pokemonshowdown.com/smogtours-gen4pu-575833 the Strap has won gg

won gg sorry abt the flinch

won vs obb. Sorry about that miss