this is amazing. agree

AGPL I POWER RANKINGS
​
Welcome to the Power Rankings for the 1st edition of the AGPL! This will also be the first edition of these Power Rankings, with the goal of these rankings to hype up the upcoming few weeks and give a representation of where each team is believed to stand in relation to the other teams. To obtain these rankings, for every single Tier, we have asked 1 person from each team to rank everyone not on their team in that tier. To further reduce bias, the highest and lowest scores from each tier were removed when calculating the stats. The calculation for the total score is determined by the sum of scores for each tier; first place gets 6 points, second place gets 5 points, etc. The Bo1 slot is a bit more complicated, with 1st place getting 24 points and going down from there, but for the overall scoring, these points have been divided by 4 to be inline with the ORAS and Bo3 slots.

Even though we tried to be as unbiased as possible, it does not mean these rankings will be predicative of final results! If you or your team end up low on this power ranking, please don't take it to heart; this tournament is meant to be fun and it is up to you to prove opinions wrong! However, if you feel that your pride hinges on these rankings, you may feel free to voice your complaints here and they might be answered.

A big thank you to the following users who helped in the contribution for rankings: Skarph Zenithial Megazard pichus frogger1387

Without further ado, here are the rankings!
And here are the overall Team Scores:
For more details on how these rankings came to be, here are the detailed votes and stats for each player, also linked in the title.

Hope we have a fun and exciting AGPL!

Who cares about pr, real question is how much Bobjoejuan would've gone for had he signed up

MDB said:
Who cares about pr, real question is how much Bobjoejuan would've gone for had he signed up
Click to expand... 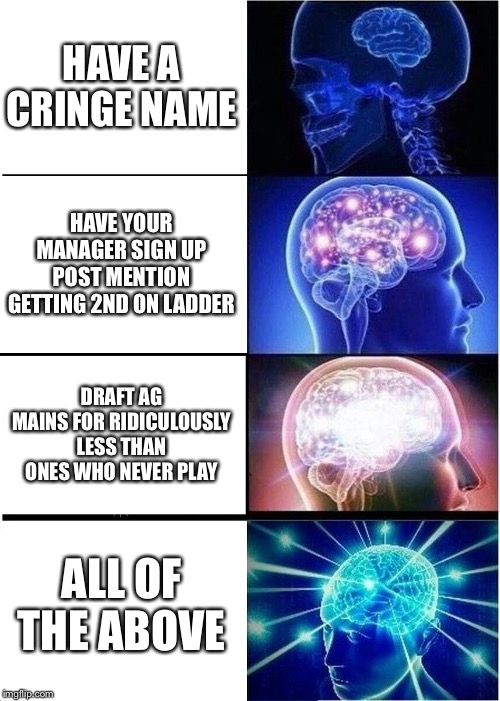 All in good fun frogger

Off to a strong start. 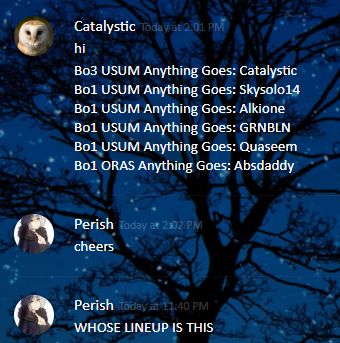 Hi I made this
something something go yeet squad

Edit : sorry for tags, wasn't on purpose, but anyway now its too late so I'll let it

Because my teammates are scared of something, I'll do it for them : Here are some memes I'll update of those past week in this first AGPL ! 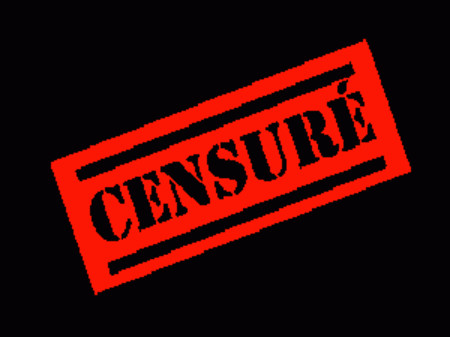 
PurpleGatoradeYesterday at 11:28 PM
,,,,,
we are not using vivillon ever


PurpleGatoradeYesterday at 6:53 AM
bro
vivillon is unreliable 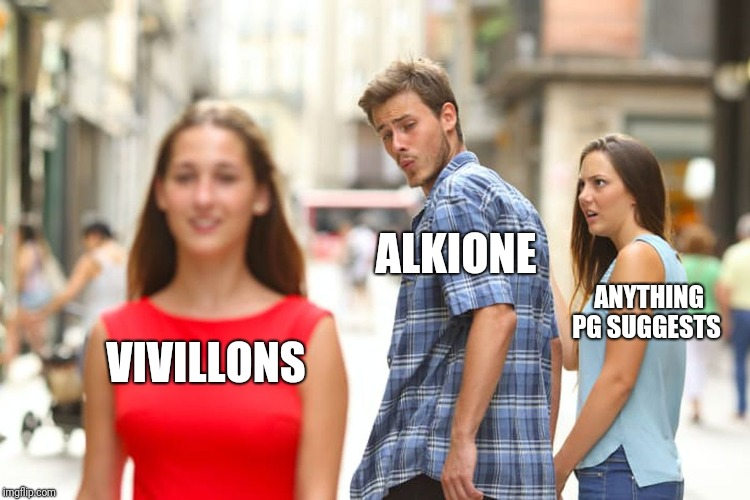 Moderator
Hello, we have lost, but I enjoyed this tour so I will be doing short shoutouts. First I'd like to apologize to anyone's eyes that had to witness my game, this may be hard to believe but my brain played that entire game with only 5 mons in mind, completely forgetting I even had a Skarmory on my team. True story, so I played horribly and lost and this is something I am deeply regretting atm. As for shoutouts.

Quantum Tesseract - Thank you for drafting me, I thoroughly enjoy the AG metagame like 50% of the time I'm playing it which is prolly higher than the avg ag player. So I really wanted to get drafted and I've been snubbed in drafts more times than I can count so I wasn't certain of anything. You were a great manager till the end and I appreciate the opportunity.

Megazard - You are truly one of the most frustrating individuals to work with b/c of how high your standards are for your teammates, which isn't necessarily a bad thing b/c we know you have good intentions. Thank you for being the most consistent one among us in the discord by far

Chloe - Thank you for being the best oras slot and for everything else you do blah blah etc etc fuck you. You got me into the ag meta like a year+ ago when you were still tl and I am very happy you did so, even if you also took me out of it by .nom lotiasiteing me, I appreciate everything you do.

.nom lotiasite - Truly one of the kindest individuals I've interacted with on this site and very easy to get along with. Thanks for helping whenever I asked and trying your best >:O.

Jrdn - You dumb fuckin idiot WHAT are you doing. Weighing us down in the finals with your curse you god damn fuckin asshole. Thanks for helping us get there ig...

. You were a super free slot tho fr just grabbing some shit out of ur builder and murdering someone every week.

Xayah - thanks for being around and supportive to some extent, you're a very nice individual :O.

pichus - Thank you for week 1 team and for all the help throughout the tour, you gave me help whenever I asked and also built my finals team but I don't wanna talk about that b/c I soiled your legacy with my play

We were hella dominant all tour and even if this tour is kinda a meme I genuinely had more fun than I do w/ most other smogon shit, so there's that. I'll make a team dump somewhere b/c I made most of my shit.

This win was unexpected to say the least. After our 2-10 start to the tour I thought we were effectively out of playoffs, but that just made the turnaround even more fun. I'm super proud of my team for continuing to keep faith even when it seemed like we had no chance, and it eventually paid off thanks to some clutch wins and timely luck. My goal before the draft was to get a group of players that gelled well together, were self-sufficient, and were able to pull out wins under pressure. I'm really happy with how my team turned out, and it's been a rollercoaster of a season. Here are the individual shoutouts:

Catalystic Thanks for being a great assman. I really needed your discord abilities at the beginning bc im hopelessly incompetent, and your luck skill came in clutch for us for like the last 3 weeks. Considering we built a total of 3 teams over the course of the season, 5-2 is a pretty damn good record. I think i paid like 20k for you but it was absolutely worth it, you're one of my best friends on the site and you're a great player too. Thanks for a great season.
skysolo14 This is the 4th or 5th time I've teamed up with you in team tours, and it's the same inevitable result: The team wins, and you deliver when it counts. I felt confident giving you any type of team bc you can pilot everything so well, and you did it nearly every week (except that one time when u called ho-oh a 'bitchmade' mon and then got destroyed by it). Thanks for being a consistently toxic yet positive presence.
Alkione You probably had the least lines out of everyone in the chat, and every one of those lines consisted of meaningless drunk texts or "VIVILLON". That being said, you still managed to pull off that insane win in finals which I'm gonna remember for a long time. CM unecro and mmy vs 2 dark types is a horrible mu but you somehow did it. Thanks for your weird french memes that nobody understands, and maybe next year I'll let you use vivillon :)
GRNBLN You really bounced back in this tour after a rocky start, and honestly played every game super well. You were one of the players I had my eye on before the draft and I'm really glad I was able to get you. You won some pretty important games late in the season, and I knew I could count on you every week.
absdaddy When you told me that you wanted to play oras ag i was super hyped bc I know how good of a player you are. I think we were on the same page nearly every week when it came to teambuilding and the result was some pretty fire HO teams. Sucks that the matchups were heavily against you multiple times, I think you could've gone undefeated if you hadn't gotten bullshitted in half the games. ORAS is a rly haxy meta but I hope it was fun regardless, for me the 10k was definitely worth it :)
Quaseem I know the results didn't go the way you wanted them to but that shouldn't take anything away from the effort you put into this tour. It was your first team tournament so the pressure was understandably different, and you were quite unlucky with matchups and got punished for a few minor misplays. You def got better as the season wore on and I look forward to seeing you improve in the future.
Viduf When you asked me for a tryout I was kinda shocked bc I hadn't seen you online in like 3 years. Clearly the rust didn't get to you bc u played at a rly high level in tryouts, and were super helpful with the oras prep throughout the season. I wish we could have played you more, you're still a great player and hopefully you get back into USM ag too.
Luthier i think u disappeared after losing with vivillon (Sorry Alkione) week 1, but I don't rly blame you bc our chat was pretty dead lol. Thanks for showing up again at the end, you're an entertaining presence altho u bully me too much :[
Alpha Rabbit definitely the good luck charm of our team. The second i put u in the starting LU, our results started turning around and you played rly well individually as well. Sucks that you couldn't win with THE team but u did a great job regardless. I'm surprised at how quickly u picked up the meta after not touching it for a long time, it just goes to show how skilled u are.
Ratkiller Really sorry we couldn't get you a game this tour, but your presence in the chat was still very appreciated. You were always willing to help in usm and oras despite not playing, which a lot of people wouldn't do so thanks for that.
Lasen top tier shitposter as usual

Final Thoughts:
I decided not to play this tournament because I was sick of the stale state of the metagame, and while an enjoyable experience, this tournament has made me realize that gen 8 can't come quickly enough. The vast majority of our teams were old squads from mine or cata's builders, but they still performed well bc the meta just has not developed significantly. This tour also highlighted the importance of using stuff you're comfortable with over out-prepping the opponent, as we learned the hard way in the first Abs vs Chloe game. I'd like to echo Zenithial 's earlier point that skill matters so much more than metagame knowledge - my team had only 2 real ag mains (quaseem and grn) but we still did well because of the experience and ability of the rest of the squad. Thanks to the rest of the managers for making this a fun tournament and a special thanks to Perish Song for hosting. Go Dooms!

Time for another week of ORAS AG, here's some things I saw in Houndooms discord that match that tier's quality. 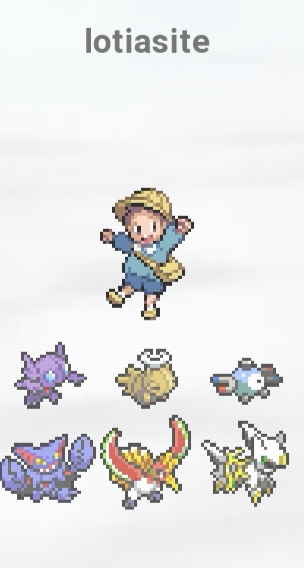 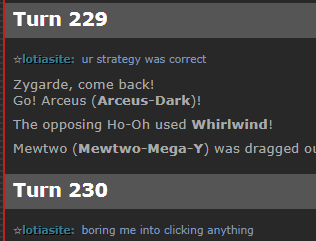