Alec Blue said:
I did a search, and, much to my surprise, a thread like has not been made yet in the OM forum. 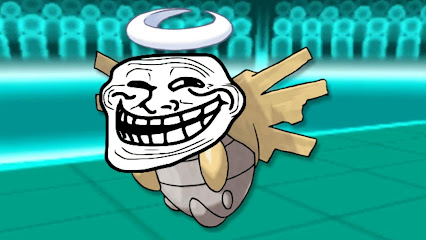 shedinja isnt "over-centralizing" or disruptive to the meta. its "centralizing" sure, it forces you to run counters to it...but unlike most pokemon in the ubers tier, its not like shedinja has staying power with each counter literally ohkoing it, and outspeeding it. and literally setting up hazards beats it. sturdy shedinja is arguably banworthy in EVERY metagame its possible to be obtained in...except BH...now, this might sound odd, but lets not forget what BH is..."everything can have everything" shedinja doesnt centralize the meta nearly as much as we think it does. as far as potential counters to sheddy goes, it has the entire tier. literally every mon can beat it 1v1 if it so wanted too. and some even do it without noticing. and heck, even ITEMS can KO it. sheddy is a special case where dispite being disruptive and centralizing, its not to a serious extent. if sheddy didn't have to fear hazards, helmets and mold breaker, THEN id call for a potential suspect. but we have so many ways of dealing with shedinja...its actually not nearly as bad as say...preparing for ates, or preparing for mm2y. those guys require a complete pokemon with specific abilities AND moves to beat them. sheddy just needs moves already used in 70% of teams anyhow or just throw out some hazards, which is already huge in every meta. magma storm, stealth rock, rocky helmet, mold breaker, leech seed, status(sometimes) and more. but alas, its not nearly as centralizing as people think. i think its more like "we see the red, and think its a do not enter sign, when in reality its just a stop sign" mentality. i think people just see "OH GOD ITS INVINCIBLE" and cringe.

no but seriously, just so you understand a bit better...lets compare Sheddy in BH to arceus N in OU, pretty fair, arceus can literally sweep the ENTIRE tier if they arent prepared, and would be nearly impossible to break down due to its superb bulk causing many of even the greatest wallbreakers to fall short of 2hkoing it making pretty much half the current tier dead and forcing people to run multiple stuff like terrakion and ferrothorn to beat it. shedinja can literally sweep the entire tier if they arent prepared and is neigh invincible to attacks of every kind...but is extremely easy to stop due to the plethora of ways of combatting it in BH. see the difference? one is centralizing to the extent of having nearly NO ways of stopping it....and one is centralizing, BUT not to a severe extent of limiting the tiers diversity to a degree in which the meta becomes stale SOLELY due to the bug.

so it might require some teambuilding, BUT severely less then say, preparing for ates, sleep, mewtwos, or...heck...any threat really. slapping a move/item>slapping a entire mon. mold breaker isn't REQUIRED to beat sheddy. moldy gar is currently the ONLY moldy being used, and its mostly used to spore bouncers, rather then beating shed. thats just a bonus.

sadly, i did not keep this short...but for such a good topic at hand(no joke, im shocked people dont bring up sheddy ban as much as imposter) i just felt like saying "lmao nope ayy" isn't enough. especially since you actually HAVE valid reasoning and solid arguments.

(I accidentally hit Post before entering any text. If you saw a blank post at some point, sorry. That's why.)
Thank you Lucass for the constructive argument. I do recognize all the points you brought up, and I think I even had them in my post. But there is one thing...

...Arceus can literally sweep the ENTIRE tier if they aren't prepared, and would be nearly impossible to break down due to its superb bulk...
Click to expand...

There are many things in BH that can be nearly impossible to take down at any given point in the battle. But "nearly" means there is still at least a small gray area.
With Shedy, there may be no gray area at all. Most people usually have maybe only two or three Mons that can even touch Shedy (including hazard setters). But once those Mons are gone and those hazards are cleared, that's it. The gray area is gone. There is no more "nearly impossible". It becomes just flat out impossible.
The moment Shedy shows up on the team preview, the entire battle starts to revolve around Shedy. The one with Shedy does everything they can to keep Shedy alive, and the one facing against Shedy does everything they can to keep their Shedy counter/check alive. That's why I'm saying that Shedy is over centralizing and needs to be banned.
Last edited: Oct 21, 2015

Shedinja is one of those Pokemon who is a complete terror at low to middle skill levels, but at high level play, is merely a nuisance. Yeah, it stops some threats completely cold, but it dies so easily. At high level play, Shedinja is so risky you have to build a huge chunk of your team around it just to make it usable, otherwise it'll either drop once a check comes out or give your opponent an advantage when put at an unfavorable match-up for Sheddy. It takes a very good player to make Shedinja threatening to a competent opponent. Also, Endeavor only has a whopping 8 PP, so if it throws Endeavor at the wrong opponent, like a Giratina, it's really bad for Sheddy. Beyond Endeavor, it's pretty wimpy and near useless beside shutting down a potential sweep.

Also, Mold Breaker Pursuit utterly destroys 95% of the Sheddies and that alone forces a Sheddy user to do plenty of scouting before bringing it out, lest Sheddy just die uselessly.

Mind, I don't like Shedinja and would be happier with it gone, but at present, despite my loathing of the bug, there's nothing about it that's ban worthy.

Alec Blue said:
There are many things in BH that can be nearly impossible to take down at any given point in the battle. But "nearly" means there is still at least a small gray area.
With Shedy, there may be no gray area at all. Most people usually have maybe only two or three Mons that can even touch Shedy (including hazard setters). But once those Mons are gone and those hazards are cleared, that's it. The gray area is gone. There is no more "nearly impossible". It becomes just flat out impossible.
Click to expand...

to be honest, this could be said for any pokemon, where if their checks and counters are eliminated, then they finish you off. mega ray, mega gengar, the mewtwos, i cant think of an offensive example where this ISN'T true. the only difference is sheddy requires 2 turns to ko these mons, while mega ray, gar, and mewtwo ohko them due to thier rediculous speed. i see sheddy like mega ray, gar, and mewtwo, with the only difference being the three can actually beat their counters themselves, while sheddy has to devote THAT to its teammates. again, i get that sheddy is a LOT more then the three, considering it can switch into almost any pokemon, but since it dies to a simple prediction, or a simple hazard, its not really broken.

another thing you mention is how the game revolves around beating shedinjas counters/shedinja. well, although this is somewhat true, its actually BECAUSE of that that shedinja is harder to beat. when you play obvious, your opponent WILL capitalize on that. trust me. the best thing to do vs sheddy, is to play normally. forget shedinja. except for the random "pattern" moment, when you see who he feels safe switching into. i dont think sheddy SHOULD be revolved around, people just do it again, for the "oh god its invincible" factor, which makes predicting them 100x easier. as a shedinja player, i can safely say, its the people who capitalize on shedinja, are the ones i beat the easiest. where, when people just play normally...THEN suprise me with their sheddy counter, i lose more often. shedinja plays differently then the others. its kinda like little mac in smash. sure, hes a beast on land, but in the air...hes...not very good. sheddy is similar...sure, his ability to tank hits is amazing...but...the fact he dies to 1 hit is a bit of a "double edged sword". especially when WALLS can do it.

hes kinda centralizing in a special way. where dispite being centralizing, hes not really "OP" he might base the game around him when hes sent in, but he doesnt limit teambuilding to a BAD degree. on top of that, he has plenty of checks and counters, like giratina, mold breakers, Poison healers(especially kyogre, who tanks ice shard, and can leech seed/scald) sand streamers, rocky helmeters, regenerators, and gengar. thats another difference, all of these pokemon are viable and they dont even have to gear their movesets to specificly beat sheddy. most PHers use leech seed naturally, rocky helmet is STILL good with ates with fakespeed running around, regen usually carry sacred fire, sand streamers can just...exist, and the spc def boost isnt too bad,giratina is immune to its strat, and LOVES to set stealth rocks/throwing out wisps, gengar is...gengar...its a monster of the tier. and if you SUPER fear shedinja...theres literally a "press to kill" button called mold breaker pursuit, where allthough devoting a team slot to beating it (i usually put it on gengar for lels) it guarentees that a shedinja matchup is almost automatically 6-5 upon seeing one. and mold breaker lets to sleep bouncers, break past fur coat and flash fire, and do other cool things. its not as useless as people think it is.

As some of you may well known Mega Ray and Mega Mewtwo/Protean have been on the radar for awhile, and a lengthly discussion took place with Myself, Mamp, E4 Flint, and many others. This is the entire 2 and a half hour discussion, I suggest you read it. I deleted join/leaves nothing else.

I tried reading that, got about halfway through (which took like... 10-15 minutes), and the only take away I got from that mess so far was "You and E4 disagree on the definition of what's broken". That thing is extremely long and difficult to follow since all the irrelevant chatter about stuff like Flareon in STABmons or Shiny Ho-Oh being banned in AG is still intermingled. Not to be lazy, but is there a more succint summarization of the points brought up? Because I feel like I'm missing them and will miss them if I try to finish.

Community Leader
I planned on summarizing some things I said in a proper post eventually after verbatim has finished his post in the main thread and after I speak to him and others. Primary topics I am considering are "what is BH" and the ban considerations going forward.